Here’s the latest map for frequent bus service, including BRT, in Raleigh. 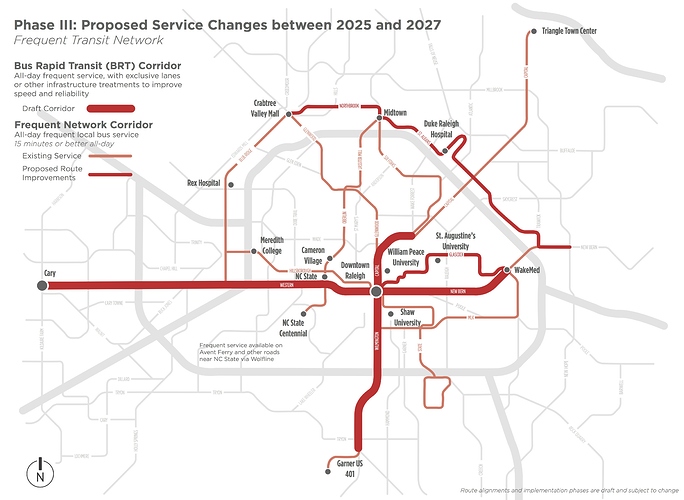 This whole idea seems utterly shortsighted and insufficient. There needs to be rapid transit to RDU and to RTP. Not buses. And sooner rather than later, given the 10,000 people who might be coming here to work for Apple and the potential 50,000 from Amazon.

And even if they don’t come, without rapid transit it will be a hindrance to any growth, and cause even more separation between Raleigh and Durham as communities.

I work in RTP and am already considering moving to Durham because of the commute. Raleigh needs to realize this and get on it.

As a RTP employee, what kind of “rapid transit” do you want to see?

Commuter rail is supposed to be the answer to connect Raleigh to RTP. The plan does focus on Wake county though so I agree with you some regional transit plans are needed. (or better realized if not already there)

It seems like a good start, I like the connections to the future regional transit centers (DTR/Cary Station). 2025 seems like an awfully long way off. Is there any way to expedite this? Didn’t Wake vote to pay more taxes for this and all we get is some increased service and 7-9 years later something that’s actually different than what’s there now?

Commuter rail, for sure. 40 is beyond capacity and 70 is not equipped (though it could eventually become a second highway — I’m from Palm Beach County originally, and Southern Boulevard was turned into a highway of a kind to transport people from Wellington to I95).

The Warehouse district is fast becoming culturally vibrant — a place people want to live. The train station is perfectly placed. But it has no local commuter use, which seems like a massive enforced error that will eventually put a damper on living in the area for people like me who have to commute out to RTP or to Durham, which is where tech companies are still moving to (all of the prospective plans of Apple and Amazon are focused there).

Raleigh will still survive, but with tech companies remaining in — and still thinking of moving to — RTP, it will be Durham that reaps the benefits unless commuter rail can step in. Most of the young people who work at my company (IBM) already live in Durham. Raleigh should want people to stay in Raleigh — it’s bigger, safer, and the belt line makes it easy to get around. Virtually no one seems to live in Durham and work in Raleigh. But if Raleigh starts losing ground, that could change. If you get a job in Durham, go and work in Durham.

Commuter rail is part of Raleigh Union Station Phase II as well as the new bus station across from citrix.

I’ve heard that, but I’ve always heard skepticism about whether it will actually happen. What’s a realistic timeline? Phase 1 is going to be implemented over the next 10 years, right? Meaning. construction of the commuter line would be several years behind that. A child born today in downtown Raleigh might be able to drive to Durham before the commuter line is finished.

Phase 1 is complete. Phase II involves building the second platform which would service the commuter rail and the new RUSBus station in the brick buildings next to the current Union Station. I’m not sure what the timeline is for those projects. Here’s some more info on the two phases:
https://www.ncleg.net/documentsites/committees/house2017-187/2017-2019%20Biennium/2017-10-02_Meeting/RaleighUnionStation.pdf

I totally agree, 200%. Raleigh seriously need to kick it Up a notch and not drag it’s tail about this. IF and a Gigantic…IF !! Amazon comes to the Triangle region Transit needs to be Top of the List ASAP. I’m for Light Rail and I can’t see why folks would thumb their Noses up at the idea. BRT is another way of getting around as well as extended Bus Service Hours. Each year traffic around the Triangle grows and so does the Headaches. I commute to work each day and it takes me longer to get to and from work…TWO HOURS A DAY. depending on traffic conditions. If something does not Improve… Raleigh/Durham/Chapel Hill area are Just asking for it. you think I’m kidding…Look at L.A. or NYC.and picture that here in 3 to 5 yrs. Raleigh is the fastest growing City in the USA now, and it doesn’t look like its slowing down anytime soon.

Exactly! I moved here from Miami more than a decade ago, and lack of well functioning transit was one of the (many) reasons I left south Florida. I had a short reverse commute while I lived there by design so I didn’t spend half my life road raging in traffic. I happened to score a reasonably priced rental in a great walkable area (South Miami) so I didn’t need to drive when I got home, but those places were disappearing fast. There was no way I could afford to buy my own place without a soul crushing commute (sound familiar?). Not the quality of life I was after.

There was expanded bus service in Miami using a “busway” down US-1, but few people chose to use it unless they had to because it was still slow AF because…traffic once you leave the busway. A cyclical problem. I really hope BRT can work better here!

When I moved here, I saw the writing on the wall early on because I’d already experienced living in traffic hell. But people don’t seem to think proactively, and because things were OK then, the general public and legislators didn’t see a need. Not enough riders to justify cost at this moment in time not accounting for how long these projects take and how fast things can change when you’re not paying attention.

Why we couldn’t have more frequent rail service of some sort between Raleigh and Durham right now that isn’t the Carolinian? We’ve taken Amtrak to Durham for the day before, and we got stuck in there once because the return train got delayed for 3 hours near Greensboro due to storms to the west. Uber could take care of that now, but this was well before Uber!

I think the real issue is that we need Federal and state funding. Look at the people in charge of both, and think if they’re going to be proactive and useful. Not holding my breath. I’ve watched my commute grow every year, and it’s just going to keep getting worse.

In addition to Bus Rapid Transit, the ten year Wake Transit plan calls for a 37 mile commuter rail line that would run from Garner > downtown Raleigh > NCSU > Cary > Morrisville > RTP > Durham > Duke U along existing rail lines. This is a crucial and progressive component of the plan that seems to have been overlooked to some degree. You can read more here:

The main rail line between Durham and Raleigh is owned by the NCRR and heavily used for freight. In fact, freight gets preference over Amtrak for timing right now.

GoTriangle is studying commuter rail right now. BRT is further along in the planning phase obviously, but CTR is a very important piece of Wake Transit. The transit tax district expects to provide $90 million a year in revenue. Additionally, BRT from Cary to RTP is very much in play.

The only way to get to currently get to RTP from Raleigh or Durham is a bus though, and the Wake Transit plan is the only plan that’s working actually connect into RTP with another transit option (Commuter Rail) outside of a bus. Durham and Orange have put all their eggs in 1 basket - connecting the two cities via light rail, which has great implications for land use, but if you look at actual commute patterns (IE the 40 conundrum) does nothing to resolve this connection piece. From that standpoint, Wake Transit plan (and Raleigh) are the only communities actively working to connect RTP to a city hub. I love the idea of light rail, but when it’s just connecting Durham and Chapel Hill, I don’t think it’s actually solving many of the issues we have to date with current and trending traffic patterns.

I really have no idea what you mean here. What implications for land use? What other baskets should Raleigh be investing in?

Light rail — whether it’s a subway or an elevated train or whathaveyou — is the way most metropolitan areas deal with traffic issues. It’s traffic independent and takes traffic off the roads and allows people to live where they want to live and commute to where they have to commute to.

Cities that have failed to use light rail, or have done it badly (like Miami), see their communities become segregated. It’s bad for everyone.

By definition anything that’s a fixed rail, in the ground, encourages density along it by being a permanent fixture vs. something that can be moved. I think we’re agreeing there based on your follow up comment.

My only point is that the DOLRT plan only addresses job growth in the Durham > Chapel Hill corridor and completely omits RTP as a destination, so no issue is resolved with that traffic pattern in their transit referendum. Wake County is the only plan that’s actually funding a solution to connect into RTP, via the Commuter Train portion which is proposed to run from Garner > Durham (via RTP). BRT when implemented well is also a very good option, it just needs ROW and dedicated signals, etc to be successful. It’s a great option when utilized correctly and I’m super pumped to see it implemented regionally!

I think the BRT is plenty exciting. I do think the devil is in the details, however. The downtown alignment is critical and it seems like they have somewhat punted on that up to now. I am of the opinion that the North/South BRT’s should be interlined, as should the East-West, and that every single BRT bus should serve both Union Station and Moore Square.

I view upgrading commuter rail to true regional rail, with higher frequencies, maybe electrifying, adding more branches, and also infill stations, as a possible “phase 2” transit program. For an idea of what that looks like, Denver’s first transit tax was in 1973 and they increased it for FasTracks in 2004; Charlotte’s first transit tax was in 1998 and they’ve begun the discussion and planning for a second round although it’s likely to be several years off. So somewhere north of 20 years from now, when everything funded by our current transit tax has been operational for 5 or 10 years, we’ll have the discussion of what comes next.

Just wanted to add to this, relevant that the state budget is putting up another blockade for the DOLRT project. Luckily Wake Transit relies much less on state funding as a source (after seeing how difficult it was to get for the Durham > Orange project) but I’m sure these type of funding blocks will be a hurtle for some of our projects as well (Commuter Rail?) State budget proposal could impact planned transit projects | GoTriangle