With respect to building parking decks, I think the days of the city providing parking is over. They are not going to do it directly but have moved to partnering with developments, like what happened at The Dillon. They needed parking for RUS and I’m sure a deal was made in some way to get the spaces into The Dillon’s parking deck.

This is a good way to move us (again The City) from providing the parking as the city can focus on transit instead while the current city-provided parking operates only to cover their own cost.

Someday, the city-owned decks will get too old to maintain and have to come down. The needle moves forward again when the city partners with a developer to build new mixed-use, probably with some parking, but with density that supports transit.

I see it as a very slow transition but it’s being done in the right way as transit takes time to take hold. For now, if The Edison needs to add more parking underneath office, that’s ok cause it’ll make the parking decks that have nothing on top more and more obsolete.

Currently, the top three floors of the Blount St. deck, with 531 spaces, are owned by Highwoods. The 706 spaces on the first five levels are owned by the city, with the understanding that 297 of those spaces will be made available for use by the office tower. Additionally, the tower will contain six levels of internal parking totaling around 330 spaces, and access to the Blount St. deck will be made on the fourth level.

Yeah, that looks like 14+6 to me as well with six levels of parking over a first floor Lobby level, and then 13 more floors. The top “level” appears to be parapet walls to hide rooftop services. Total height definitely looks sub 300ft to me. If I presume a nominal 14ft slab to slab for the office levels, 8ft for each parking level, 20ft for the lobby level, and a 8ft parapet, that puts it around 258ft. What’s the UDO zoning on this site? 40? 20?

I don’t want to start any rumors, but this plus the timing of the AAP announcement…I wonder if this tower can grow at all? This is a good site for something tall, 400’ or taller.

Do we even know that AAP wants to be downtown? Maybe I missed something but I’ve not seen where they are specifically talking about being downtown.

There was a thread awhile back that indicated as such:

TBJ has a report that Advance Auto is ‘looking downtown’. For those that are unaware, technically Advanced Auto is headquartered in Roanoke VA however all of their key executives are based in Raleigh have have been since they acquired Raleigh based General Parts. This is a Fortune 500 company. I don’t have access to the article as its behind their paywall. Anybody else able to read and summarize for us?

Whether or not they’ll only look downtown remains to be seen, but I think they’re off to a good start.

They already have space in Progress Plaza. 2 floors, I think. I mean, the Millbrook location is fine for now, but it doesn’t have the space they need unless they do some major expanding.

Yeah I remember it was additional parking built into the structure. I believe Urban Planet went over this pretty thoroughly with renderings too.

N&O has some information and TBJ has some…lol

From all that I have read:
AAP is keeping there “call center” in Roanoke VA?
Corporate in North Raleigh
R&D (Engineers) in DTR

Another image (likely to change) 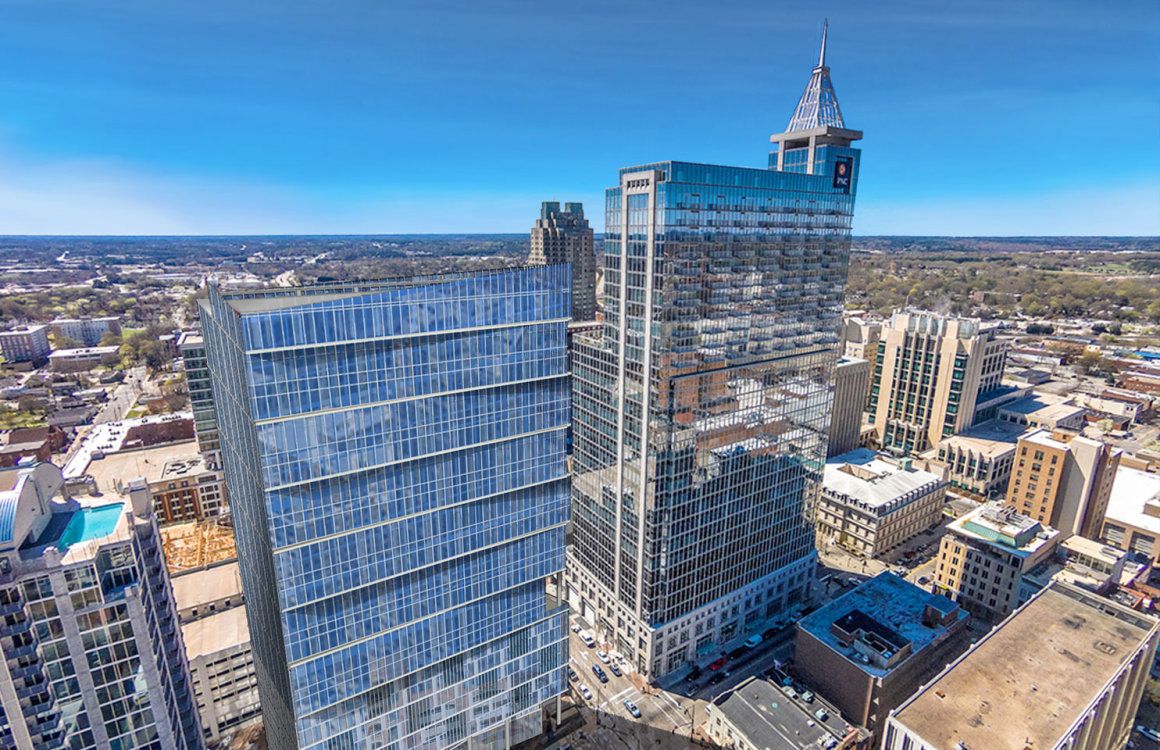 The final design I’m sure will change before they start. But I work in a building managed by them and they’re not exactly keen on spending money when they don’t need to. I’m sure it will be pretty vanilla the final version.

The agreement with the City expires and Highwoods doesn’t get the rights to those 297 parking spaces in the Blount St. deck.

Yeah the renderings aren’t great as far as detailing how large this tower will actually be. The first one posted makes it look fairly short. But the last one puts it in great perspective between skyhouse and pnc which definitely means it’s over 300ft.

With that said, they are supposed to be making tweaks so who know how accurate those current renderings are. Probably not very since they took them off their website

They definitely like to toe that line between looking like a great modern progressive developer while not spending a lot on the final product. Class A rents while spending class B money. I guess thats what you get with a shareholder driven company.

I’ll believe it when I see it because renderings have a way of overemphasizing the buildings they represent in relationship to their surroundings.

I was thinking the same thing. If it were in NYC it would somehow appear to rival the Empire State Bldg.

TBJ has an article saying highwoods is moving forward with this.
https://www.bizjournals.com/triangle/news/2018/12/04/highwoods-plots-20-story-building-near-moore.html