Okay, I poked around their portfolio some more. Their new developments page gives me a lot more hope. Those are actually interesting looking.

Very interesting. I’m guessing that this is planned for the SE corner of Martin and Dawson, based upon some of the owner names of those parcels, and the fact that @nipper.dwight reported a potential project coming here back in this topic:

Had a developer to tell me today that he is interested in building a 10 story project on the east side of Dawson / Martin Street across from Nash Square !

Here’s a screenshot from iMaps showing the suspected parcels: 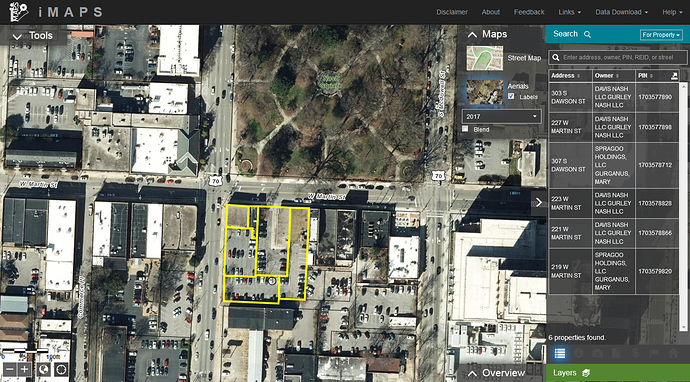 There are two parcels owned by “SPRAGOO HOLDINGS, LLC GURGANUS, MARY,” but I don’t think I’d be terribly surprised if they aren’t a part of this in some form, since they were both sold only 3 days prior (28 February 17) to the sale of the 4 other parcels owned by “DAVIS NASH LLC CURLEY NASH LLC,” all of which were sold on 1 March 2017.

Very interesting. We’ll have to wait and see what comes of this!

I really hope their website is NOT indicative of what they are considering building. Their ‘portfolio’ is awful, suburban, low-rise,…did I say ‘awful’ already?

look at their recent developments, it is a separate tab.

I realize that Nash Square historically had numerous hotels around it (big ones too like the Park Hotel and the Carolina) and only the Berkley remains form those days. However, at this point in time, I feel like a hotel fronting our precious downtown greenspace is a waste. Residential high-rises should be the top billing around the parks (walking dogs etc) with office space second (lunch in the park etc). The Dawson/McDowell arterial pair do suck horribly and hotels being adjacent to those make for good buffers (sorry about you good night’s rest travelers) so maybe this is the best outcome on that corner (assuming it isn’t a tan box)

Even the two “recent developments” on their website seem to be minor variations of one another.

The lots that Jack mentioned is about 40,000 square feet.

The Hampton they did in Portland isn’t awful…

Raleigh isn’t awful either. Will fit right in.

Some of their hotels listed lower down on the page aren’t so bad, like those in Madison, WI and Ft. Worth, TX. Far and away better than the more suburban ones that are listed higher up the page.

And here it is…
https://www.raleighnc.gov/content/PlanDev/Documents/DevServ/DevPlans/Reviews/2018/SiteReview/SR-098-18.pdf

9 stories, not too shabby. Hope the architecture is complementary to the park. Would personally love a nod back to an older style (IE 127 W Hargett). Fingers crossed that this is a success and actually gets built.

Haha sounds like the developer wanted to go lower but couldn’t. City of Raleigh strikes again!

now…if we could just get a rendering…

This used to facing Nash where the municipal building is
And this was where the N&O parking lot is.

Virtually anything offered nowadays is a lesser building than these.

WHY has Raleigh destroyed all our most beautiful old buildings???

The tower that was replaced by the awful First citizen’s bank Building on F-Ville is one I wish we still had the most.

One of my favorites as well.

This was my favorite 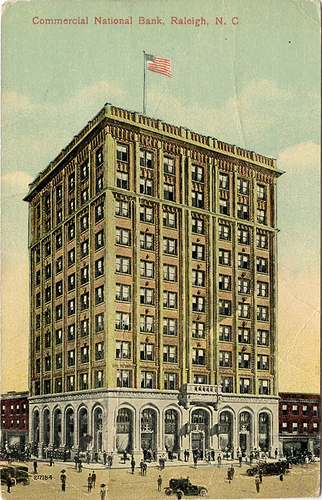 Good ol’ Commercial National Bank. Lasted until 1991. Should be a crime to steal this sort of historic architecture from society.