Looks like you can also support them financially as an individual or become a corporate sponsor, too.

You can also apply to this system to become a volunteer for the University Games. It sounds like the idea is you’re supposed to volunteer at other sports championship events around the Triangle, and you rack up brownie points to get higher priority to be chosen as a volunteer for the Games.

Also, don’t know if this is taken to account at all. Looks like South Korea has hosted this thing twice since the US has hosted it. Maybe that might help play here, but who knows maybe money talks at the end of the day.

Should the North Carolina bid be successful in October, it would only be the second time the United States, and only the third time North America, will have hosted the summer edition of the FISU World University Games after Buffalo in 1993, and Edmonton, Canada in 1983.
The proposed host is named the Triangle Region and is made up of the Raleigh-Durham-Cary-Chapel Hill areas of the state of North Carolina.

For Korea, the country is seeking to host the FISU World University Games Summer for the third time following Daegu in 2003 and Gwangju in 2015.
The combination of the cities and provinces of Daejeon, Sejong, Chungbuk, and Chungnam make up Chungcheong Megacity. At the geographic centre of Korea, this region is home to 5.8 million people.

I noticed that as well and have hopes that’s taken into account. I think what hurts us is probably facilities and hotel rooms. Not that I’ve done research to compare, but just based on the size of our area vs theirs. I hope I’m wrong and I don’t think the US would have selected us as their bid if we were deficient.

Their city is called Chungcheong Megacity, so, yeah, we’re doomed.

The “megacity” title is just a marketing ploy since neither of our metro areas meet the actual definition for megacities.

The Korean bid committee’s trying to collect 1 million signatures from people supporting the bid. This sounds very ambitious -until you realize the region’s four volunteer service centers have over 1.5 million members combined. So local and national support could be an advantage for them.

Still, it seems like the Koreans think we’d be tough to beat since we’d get to act as a pregame for the LA Olympics in 2028. We may also not be at a big disadvantage for hotels, since Daejeon, one of the two autonomous cities, is said to have about 1,800 hotel rooms. Assuming similar rates for other big cities in the area, it sounds like Chungcheong may need to work on building more visitor and athlete lodging as well. We may be at an advantage when it comes to transportation as well for the same reason.

EDIT: The TBJ has an article about this now, too! Turns out, the Olympic Festival that the Triangle hosted in 1987 had over 464k visitors -and our bid’s lead organizer thinks the World University Games could bring about 600,000 visitors to the Triangle!

No better location in America for “college athletics”

Yeah, I’m pretty famously one to tamp down the hype on these sorts of things, but even I think this would be a very cool thing for the region if it happened. The crucial thing is that all of the competition venues already exist, so there’s nothing to build, so it’s fairly inexpensive to host. The tourism revenue will be nice while the event lasts, and it’d be a great way to raise Raleigh’s profile internationally. Plus, if it came here, I would enjoy going to these events and watching them. (I hate that wrestling wasn’t chosen as one of the optional sports, but I get it, obviously.)

It’s not going to drastically change the trajectory of the region or anything, but it would absolutely be a really good thing if we get chosen to host this.

This would be a great ‘branding’ opportunity for the region…sort of ‘coming out party’ beyond the US borders. We have the event venues in Raleigh, Chapel Hill, Durham; even Buies Creek and ALL are 'university venues"… & the soccer stadium is coming (I promise). Hotels can easily be added (already are) before '27.

Hopefully the support from the US boosters is powerful enough…Hell, we should be able to argue “…we don’t have a crazy ass dictator next door who might randomly decide to shoot a missile at us!!!..”

I want to say I heard they would house athletes in the dorms at local universities.

I was going to say same. May was a previous WUG, but was some event a few years back, where they used collage dorms to house a lot of people connected to the games. That would indicate only have to find hotel and other rentals to spectators or others that would not stay in the dorms. Not sure but guess would be timed for when no students so would also open up the massive number to student apartments as well. .

Interestingly enough, isn’t it primarily American universities that are obsessed with sports associated with their institutions? I hear all the time from people who attended universities in other countries that campus tied sport teams aren’t really a thing.

That’s absolutely correct. The United States is the only country in the world that has chosen to merge the business of higher education with the business of minor league sports. Occasionally you’ll get something quirky like the hugely passionate rowing rivalry between Oxford and Cambridge in England, but they’re few and far between anywhere else in the world. (But competitors at the WUG represent their country, not their university.)

I wonder how athletes from other countries perceive this. Do they think that the branding of event as “university games” to be odd?

Well, the FISU has been around since 1945 and was founded by Europeans, so I don’t think that aspect itself is odd. At that time, there was still at a lot of classism in international sport, so I don’t know how much of this reflects a sense of attracting the “right kind” of young man (and it would have been all men at that time).

And it’s not at all unusual for universities in other countries to have sporting clubs for students, or that these would be breeding grounds for future Olympians. But the idea that UNC’s team is going to play NC State’s team, and lots of people are going to watch the game and care deeply who wins, that’s a distinctly American phenomenon.

But the idea that UNC’s team is going to play NC State’s team,

I used to care, and hope to care in the future, but my team sucks right now.

At least we got a top 5 women’s basketball team crushing it right now and a baseball team ranked high in the preseason rankings about to start! 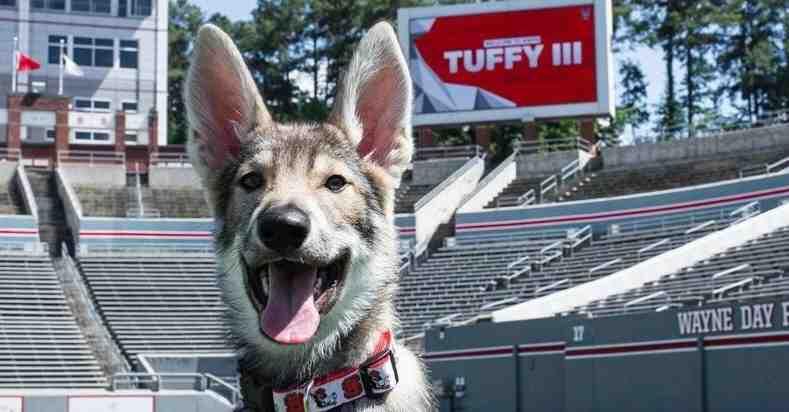 To @daviddonovan’s point, though, it’ll be okay. No matter if State (or Carolina or Duke or whoever you root for) is sucking, we’d all be rooting for Team USA in 2027. In person in our backyards, hopefully.

Hmm that’s what is always unique about us not everything is in Raleigh, personally, I wish it was all around NC State, but that my opinion in 1999 Raleigh hosted the special Olympics. Most of the events were in Durham and Chapel Hill maybe GOTriangle should speed up the commuter rail. Of that’s probably not gonna happen unless they realize an event like this is coming. However, there probably needs to be an Olympic park lie in Atlanta maybe it could be at Dix Park.

So I had this thought at 4am on a Saturday morning because I’m up all night like a kid, I’m single and currently in college and I have no class right now as I finished my English class early, and due to scheduling and class availability my next wake tech class won’t start till March later in the semester. So I wondered with the 2027 World University Games could there be a terrorist the last major Olympic event in America was Atlanta well Salt Lake if you count that. What if there was Something bad like there was in 1996 Atlanta Olympic Games. What if so Warning: I’m not tryna wake up the NIMBYs who will use my impossible scenario and highly unlikely one as a defense to go against the World University Games here in Raleigh. But if there were a bomb what if there was what will happen well this would happen. 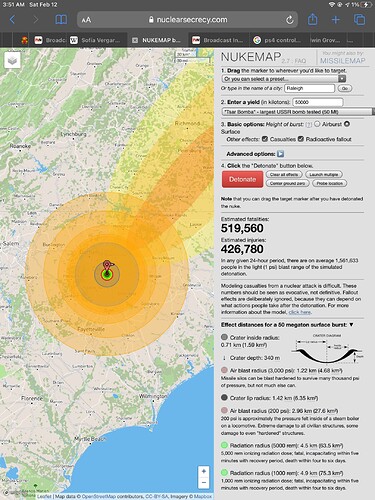 Taken from my IPad. The scope of the damage using the NukeMap connection the bomb place at the historic state Capitol where they do the electoral college count I place it there as the epicenter. Downtown Raleigh will exhilarated in fact all of it will. The city population would be wiped out and radioactivity would be seen for miles through all of the southeast even as far west as Canada. So I placed a flag and put some angles. You decide and do you think is Raleigh prepared for this. 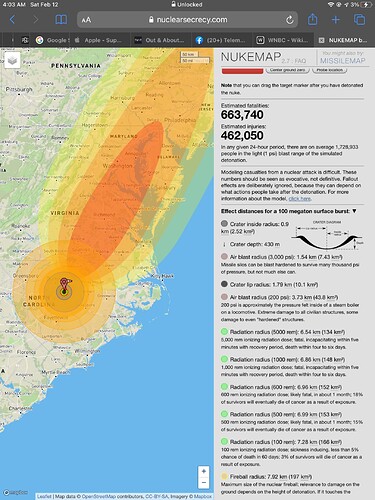 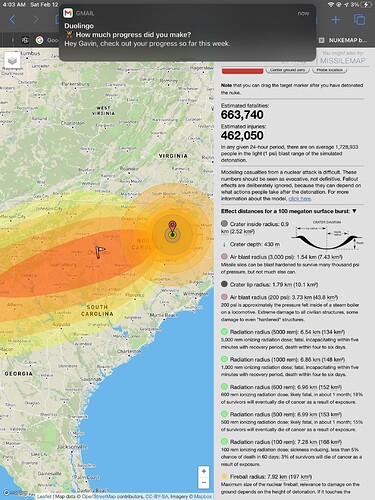 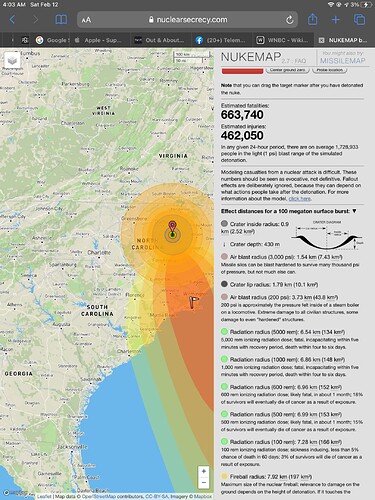 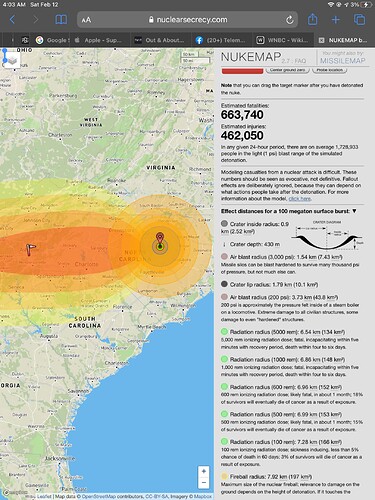 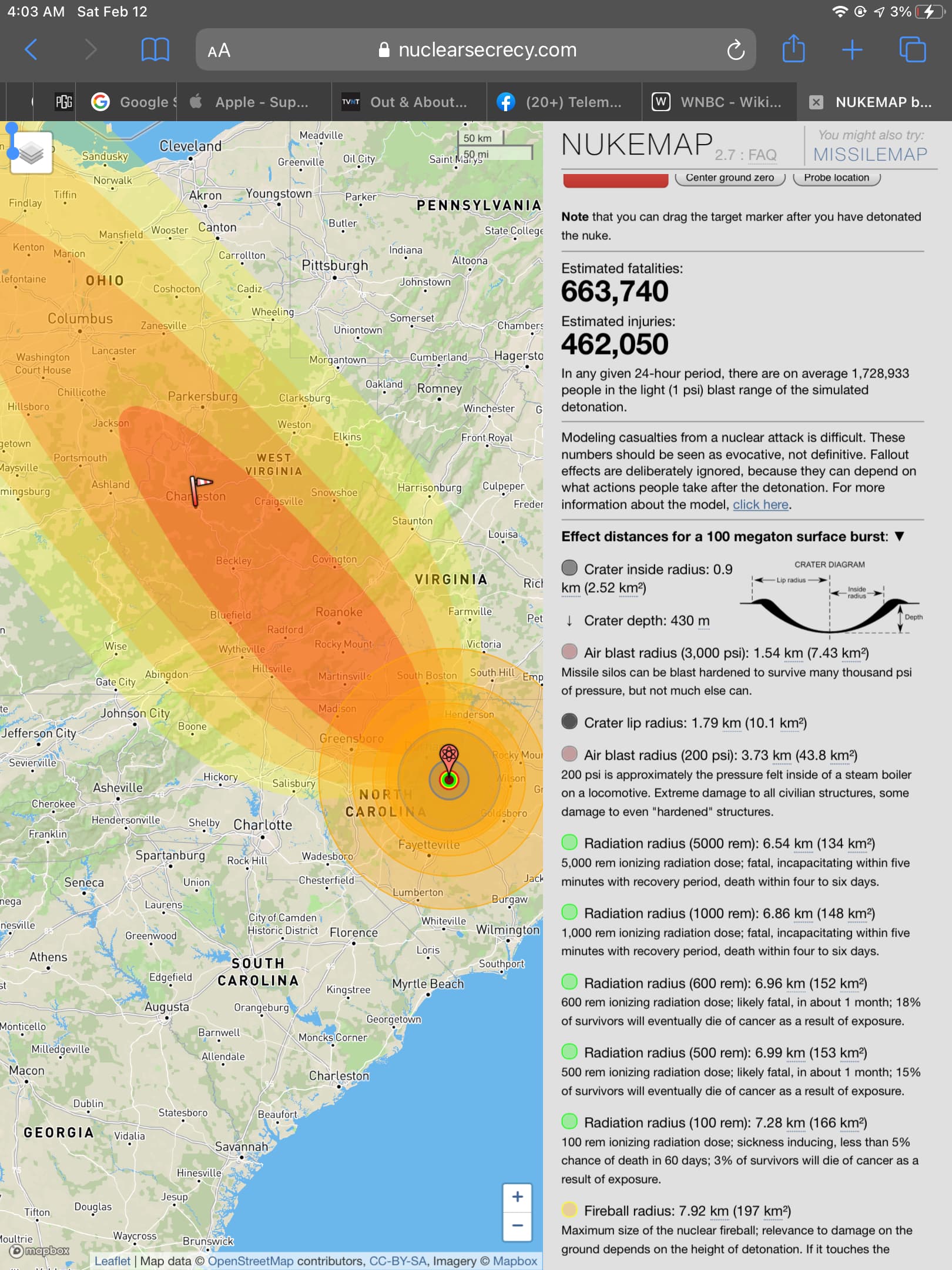