That’s interesting. I remember it being discussed that it was possible that in the future the outside lanes could be converted to BAT lanes for BRT (I’m assuming along with upgrading the bus stops to stations), but I don’t remember that ever being proposed as part of the initial phase, I know the council asked staff to look at a 4 lane alternative at one point.

It’s probably been 6-7 years. It was one of the early proposals. Maybe it was one of several options considered. But I do remember the NIMBY uproar about wasting 2 lanes to bus only. When you could use those for cars, to help ease to traffic congestion.

I thought my recollection was that it was originally a 6 lane proposal but some city council members wanted bus lanes added to the project? 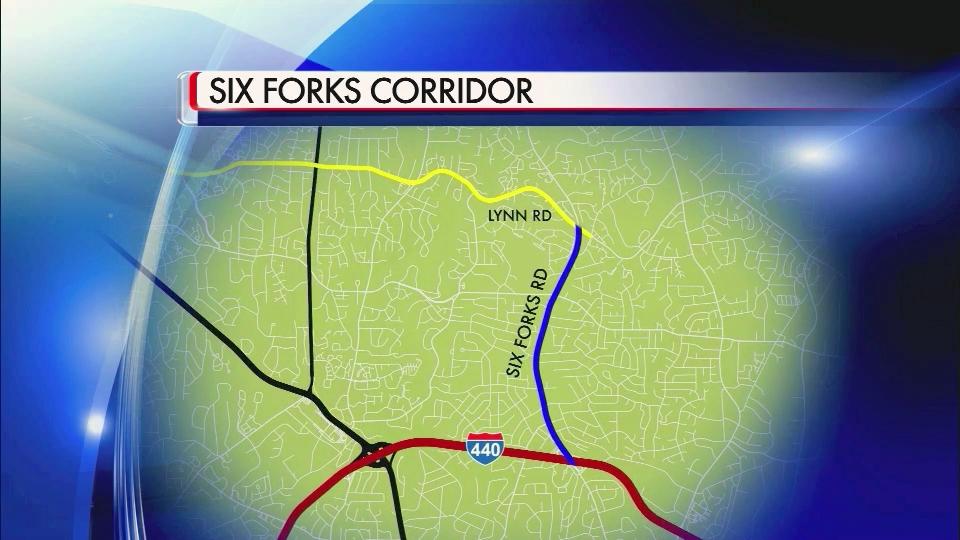 The Raleigh City Council on Tuesday sent planners back to the drawing board Tuesday for a possible alternative to widening Six Forks Road from four to six lanes.

After three years of study, city planners recommended a $45 million project that would add two lanes for vehicles as well as bike lanes, reduce the speed limit to 35 mph and install landscaped medians and extensive streetscaping.

Some residents said that would only increase traffic in the area and pose a threat to students walking to and from Brooks Elementary School.

The City Council has asked staff to draw up a plan that would have four wider lanes along with a median and dedicated bus lanes. Council members said they were concerned there were no provisions in the plan for public transit.

To be honest I don’t remember exactly what was initially proposed. All i know is that bus lanes were on the table, and then they were axed. And now we will get 6 lanes of all car traffic from the beltline to Sandy Forks.

This Tuesday, City Council will talk about buying three parcels of land for a park-and-ride (and eventual Transit Center) at the end of the New Bern BRT line.

The New Bern BRT end-of-line station will be located at the intersection of New Hope Road and New Bern Avenue. This property acquisition will allow the Transit Division to build a park and ride lot and future transit center parallel to the BRT station location on New Hope Road.

That “Transit Center” is not just a bus station, since means a specific kind of fancy bus terminal in Wake County’s 10-year Bus Plan. It’s meant to be a major hub for local transit that includes super-useful amenities like:

The BRT station and park-and-ride will be built before this facility -since the new services to justify it will be running after the New Bern line is open:

The city is expected to add a transit-overlay district around this future station on its own. So by the time BRT (and later, the transit center) is built, we should really be able to expect the New Hope station area to become much more walkable and friendly to car-free lifestyles!

im not sure about this. my blind mom went to a transit meeting back in the early 2000s and spoke about not having the no2. falls of Neuse route not going onto carlos drive…the bus stayed on Carlos drive and allowed for triangle town connections on the 25 easily for her and my blind dad. nimby never seemed to come into play here. back in the 80’s i seemed to recall some in quail hollow not wanting a bus to go down qual hollow drive…a bus my mom also used 5 days a week. i also recall a transit meeting around Creedmoor drive a few decades ago and one single complainer who worked at a Hardees up there said removing the bus would make her commute impossible.

I am hoping that this is the correct place for this project? 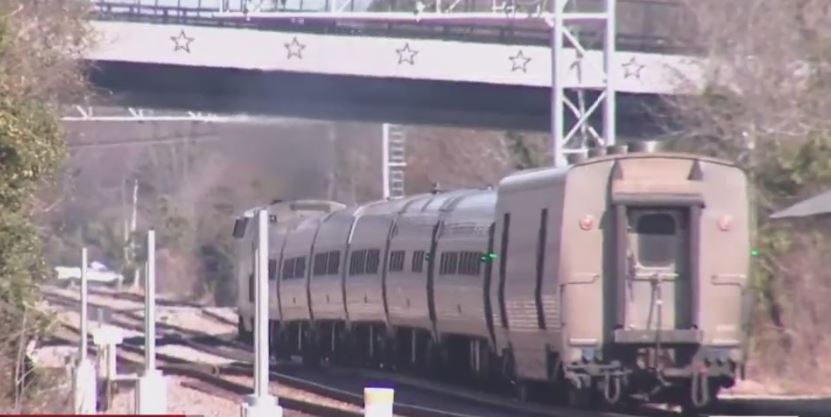 One option for the project is an eastern line going through Selma-Smithfield which would only take 45 minutes.

There’s a TBJ article on this that came out last week, so we’ve also been talking about it in the thread about pipe dreams for rail connections to Fuquay.

Speaking of pipe dreams for intercity rail service from Raleigh: it turns out Wilmington has been working on making it easier for Amtrak to eventually extend there!

The idea is that Wilmington has about 27 miles of abandoned rail right-of-way, and the state (which also owns those tracks) wants to bring back rail services there. They already built and opened a new downtown transit center there, and plan to expand it and add a train station there that could look something like this: 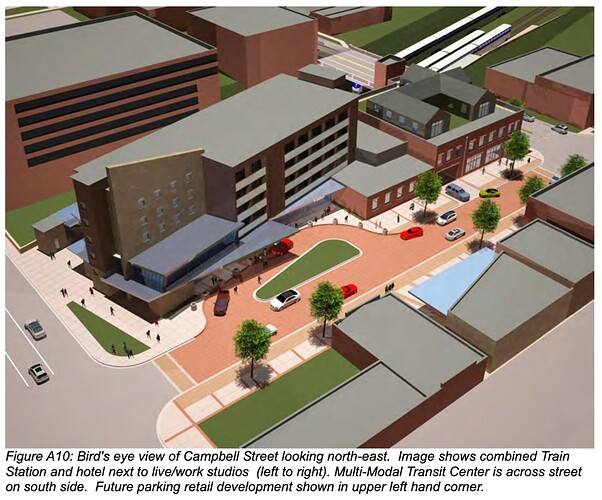 But just north of downtown, there’s a freight rail line that cuts across the future rail line -and it’s also laid out so that freight trains could block several dozen railroad crossings, getting in the way of EMTs and firefighters too. Wilmington is trying to build new tracks to solve that problem, and replace the abandoned path with train tracks and a greenway. They figured out a good way to do that, and are now working with the Coast Guard on getting the engineering right.

Near the Cape Fear Memorial Bridge, two new bridges are set to form...

The city of Wilmington continues to make progress on a rail project that's been in the works for more than seven years.

Once this bridge and rail expansions get built, it might be possible to go on weekend trips to Wilmington from Raleigh without a car!

Got an email last night notifying me that the Draft FY2023 Wake Transit Work Plan is now available for comment. For those who are less familiar, annual work plans cover funding for projects for the upcoming fiscal year (in this case, July 2022 through June 2023).

You can view the full draft plan and comment here, and you have until March 16th to do so. They’ll review our comments, revise, present a final plan in late April, and adopt it in June. That being said, you’ll never have a greater impact on this plan than during the draft process, so if there’s anything you’d like to see change, now is your chance. Have fun!

The Western BRT planning work’s already funded through the current fiscal year’s annual work plan. It’s also why we have slightly more detailed engineering and land use plans for that corridor, as of now, compared to the Wilmington branch.

This is a nice surprise! I thought this wouldn’t happen until after the New Bern BRT was complete.

I thought this wouldn’t happen until after the New Bern BRT was complete.

I do wonder if they’re simply setting the money aside for it, but who knows.

That does remind me of one thing I forgot to mention, though. I discovered in a somewhat brief skimming of the draft plan that they’re changing their land acquisition strategy for projects like park-and-rides and transit centers. Up until now, said strategy has been to complete design, then focus on land acquisition. However, with how rapidly this region is developing, they’re worried that they’re going to lose valuable land to developers. As such, they’re shifting gears to focus on acquiring land, then designing the project. Makes sense, especially considering that these properties will keep getting more expensive, but I hope they don’t end up delaying projects in an effort to grab land for other projects.

Okay that is actually awesome! Just to be clear, who are the “they” that’s changing that policy? GoTriangle, Wake County, CAMPO, or…?

As a rule of thumb from the commuter rail and BRT projects, it seems like GoTriangle, the city etc. like to budget six months to a year for right-of-way/landownership negotiations. I can’t imagine timeline to change too much depending on the timing? We’ll see if this turns out to be the case.

Yeah, I wasn’t sure what to put in place of “they.” Whoever spearheads the Wake Transit Plan, I guess. I’ve always assumed that’s collaborative, but maybe it’s primarily a CAMPO thing?

Oh! Yeah, then I think that’s CAMPO. It seems like GoTriangle is the one who legally gets the half-cent sales tax (and other transit taxes’) revenue, but CAMPO seems to always sign off on annual work plans before they kick in.

If you can dig up the interlocal agreement that kicked off the Wake Transit Plan administration, then I think the answer will be in there.

This Wilmington Rail Relocation is going to cost an arm and a leg. I have always wondered if they haven’t considered just moving the port across the river.

This would certainly be a billion dollar endeavor, but so will the rail relocation. And it has the added benefit of moving a heavy industrial use (and all the truck/train traffic) further away from the densely populated neighborhoods on the Wilmington side of the river.

It’ll definitely be expensive, but it might be possible depending on how much the feds are willing to invest. Wilmington certainly seems to be interested in putting in the effort for this rail relocation.

CSX would still have to build a new rail connection even if they move the port across the river, so I think that would be even more expensive (especially if the port relocation involves additional dredging, which is a touchy subject over there because of military involvement and wildlife habitat concerns). Besides, doing so would take the port out of Wilmington and New Hanover County’s borders, and into a Brunswick County island with an ecosystem that could be popularly seen as off-limits for industrial use.

I feel like both approaches would be equally beneficial for Raleigh (since both would prevent freight rail from literally getting in the way of passenger trains), so it really just depends on what their city and regional leaders believe is more important.

It would be a dream to take a train from RAL Union to Wilmington Downtown Station. There’s actually a sign that’s been in downtown ILM that has said “An Amtrak Community” for over a decade

Yes! I love going to DT Wilmington to eat and just walk around. Would be nice to head down for the day and not have to worry about driving down the ever boring I-40.

They have Amtrak “Thruway” bus service from Wilson haha