Will GoTriangle be considering high-level platforms at all stations to reduce boarding/dwell time? I know there are clearance requirements for track that’s shared with freight, but Brightline in Florida has developed a workaround using bridge plates. Another (probably more expensive) option would, of course, be to have the platforms on a siding. Thanks again!

Has GoTriangle considered going back to a more “Regional Rail” model that operates closer to rapid transit - with more frequent all-day service, level boarding, multiple-unit trains, etc? What would the impacts of this be with regards to operating and especially capital costs?

ANSWER: GoTriangle is currently studying an 8-2-8-2 service plan as determined through coordination with DCHC MPO, CAMPO, Durham, Wake, and Johnston counties, NCDOT and NCRR. Questions about the potential for more all-day service patterns have arisen throughout this phase of study, so we are looking into ways that an alternate service plan could be evaluated if the project moves forward.

Is there any breakdown of the allocation of these costs? EG, how much will be spent on parking structures, double tracking, platforms, vehicles, station headhouses/waiting rooms, ancillary streetscape improvements, etc.

ANSWER:
The cost estimate for the West Durham to Auburn 8-2-8-2 and 5-1-5-1 lines in the table provided breaks down as follows:

ANSWER: Phase 1 of the study identified the same infrastructure and fleet requirements for a 5-1-5-1 and 8-2-8-2. The study did not look at capital costs of an assumed service pattern higher than 8-2-8-2.

I’m curious to hear more about how, and to what degree, this service will interact with, and share tracks/platforms with, freight, Amtrak, and future high-speed trains. Is the light midday/late evening schedule (8-2-8-2 and 5-1-5-1) required in order to avoid interference with freight? Have you had discussions with Amtrak and Norfolk-Southern to talk about timetables and determine how this will work?

ANSWER: We are working with partners including NCDOT Rail Division, NCRR and Norfolk Southern to evaluate the capacity of the corridor. We should know more about how the corridor could support freight, intercity passenger and commuter rail services together once the study is complete.

I understand NCDOT has a substantial and capable in-house engineering team. Is there something GoTriangle to do to leverage this capability and expertise that already exists in a (hopefully) cooperative public agency?

ANSWER: If the project moves forward to implementation, GoTriangle would staff up to manage the effort giving careful consideration to developing an appropriate mix of agency staff and consultant support, in close coordination with NCDOT and NCRR. Already in this phase of study, GoTriangle, NCDOT Rail Division and NCRR are working together to leverage these entities’ experience managing projects and services in this corridor.

While @colbyjd3 explained the benefits of high platforms, has the benefit of cars accessible from low platforms, both locomotive pulled (Bombardier Bi-Levels, the fresh sheet cars Alstom is making for Metra) and EMU (Stadler’s FLIRT line, the EMU’s they’re making for Caltrain) been compared in contrast? They may be a bit more feasible in terms of cost and are largely proven.

Also, do you have a plan if Duke decides to sabotage this try. I know the suggestion for a planned West Durham station has shuttle buses, probably operated by Duke as they have the fleet and they rotate through buses as it is, but given their petty past can they be overriden?

ANSWER: There are no cars available in the market that would provide level boarding from the 8” low platforms required on mainline tracks in this corridor (such as the existing platforms at the Cary and Durham Amtrak stations today). Bombardier bi-level coaches, for example, have a floor height of 25”. GoTriangle is working with partners including NCDOT Rail Division, NCRR and Norfolk Southern to evaluate various ADA-compliant platform and station configurations for this corridor.

We are working with all of our partners including Duke University to ensure that we have the support needed to proceed.

Once we conclude this phase of study, that is an option we will explore!

Thanks for all the answers so far!

So, when we look at the original “candidate” stations here: 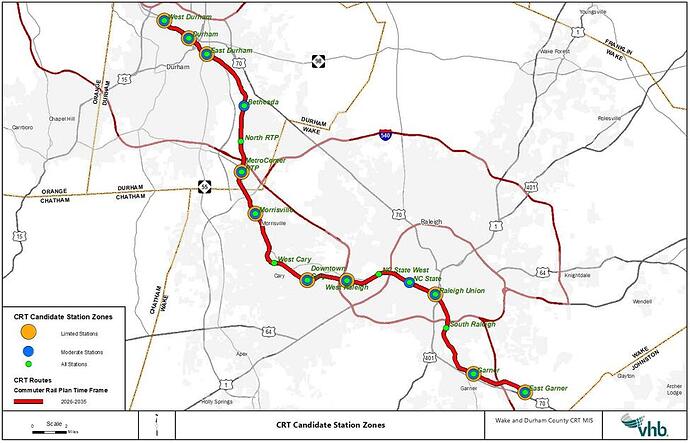 Versus what has been included in the most recent planning documents and reports: 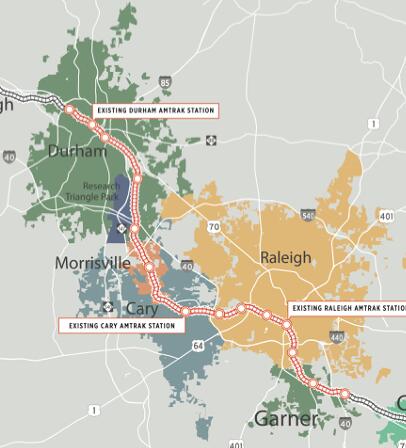 It’s clear that a few of the stations on the “bubble” have been kept: Fairgrounds and South Raleigh, while others have been dropped: West Cary and North RTP. However, repeatedly we’re told that the number and location of stations has not yet been finalized. At what point in the process will we be able to re-evaluate these decisions that were screened out early on?

I’m really big on the potential and need for a station somewhere near Cary Parkway or Morrisville Parkway. This is a nearly six-mile gap through a suburban, but rapidly growing, area with tons of apartments. The GTCR housing study even specifically calls this out:

I’m told that tracks in the area are too curvy for a platform. I’m also told that this is probably a solvable problem, but it will take resources to do so.

What’s your honest opinion about whether this sort of stuff could get added back in at some point, and if so, when would be the time to discuss it? Or are things pretty much set in stone on this by now?

What’s your honest opinion about whether this sort of stuff could get added back in at some point, and if so, when would be the time to discuss it? Or are things pretty much set in stone on this by now?

ANSWER: All station locations will require further evaluation as part of design, environmental review and engineering phases. It is possible that stations could be removed, shifted or potentially added in future phases of work, but the goal is to reach consensus as early as possible.

Could you give me some idea of what those future phases of work are, though, and when they might happen? Will it need to happen before it’s submitted for New Starts? Or will it be after? Or should I just carry on submitting this as a public comment at every available opportunity, contacting elected officials, emailng project staff, and just generally making sure that everyone involved hears about this as much as possible?

Thanks so much for your interest in the commuter rail project! We hope this was helpful.

Find our list of FAQs here: FAQ - Ready For Rail

Have you seen our interview with Raleigh Mayor Mary-Ann Baldwin? For the region we want, we need commuter rail, Raleigh mayor says | GoTriangle

Have a great day!

Thanks a lot, @GoTriangle! Thanks to those that submitted questions. Lots to go through here. This thread is closed but please continue the conversation back in the Commuter Rail - Garner to West Durham thread.