they tried a few years ago but people that lived along the route “Raised Hell” and it was canceled.

Yea, first time it went through Hongqiao, plane parked several 1000 feet from terminal and loaded us on bus to get to terminal. The Terminal also reminded me of the old original terminal at RUD. Seems they bulldozed the whole thing and built a new airport. First time flew into the new one my first reaction was “OH S… did I get on wrong airplane”

Does anyone know off the top of there head(s) when the next “phase of studies” is or will be done/completed for the Commuter Rail Transit C.R.T. ? I am really interested to see how the changes due to the DLR/money come into play?

GoTriangle’s website still says the same thing. ‘…completed in late 2019’ Well, we’ve got a week left, so it’s time to get cracking. (Now, watch the VDOT move in upping the stake in regional rail add another wrinkle in the transportation modeling, thus delaying the study further.)

@huler No, that was a 2027 deliverable in the @waketransit plan. Based on what I have seen and heard so far, I don’t think there is any chance that commuter rail will be on the ground and operating before then. But BRT most definitely will!

Bets on when we actually see commuter rail around here?

High-speed rail from Raleigh to Richmond just got a little closer to reality:
https://www.newsobserver.com/news/local/article238656743.html

The current step to plan out commuter rail is gonna take a lot longer than that.

Pages 63-64 of the Board of Trustees meeting on Dec. 18 - emphasis/formatting mine:

Schedule Risks - […] it is unlikely that the overall project will [move onto] preliminary engineering and environmental review within [the current fiscal year, which ends June 2020,] as currently scheduled in the Wake Transit FY20 work plan.

[There are] three primary risks to timely project progression beyond 2019:

GoTriangle’s regular status reports on capital projects are in the last pages of this document.

Reading between the lines, I’m getting the vibe that the Durham light rail cancelation combined with the potential speedup of the Hillsborough/Selma extension caused the whole thing to slow down.

…not that that matters much; our community’s probably the only place outside of formal stakeholder meetings where anyone would even care.

Addendum to post of 12/16. Guess we can only dream about triangle area having commuter services such as this.
Had a long chat with my Chinese friend last night. She mention that Suzhou has opened a new subway line (free rides until end of year) that has a stop right at entrance to her lake side condo complex in eastern Suzhou. She’s excited about it because she can now ride it to her work at Soochow University (old spelling of Suzhou ) where she is a linguistics professor (English, French & Russian) and her HS daughter can now ride subway to school. Cuts out 2 trips by car.

what we are getting from the transit tax[?] A whole lotta talk

I mean, I get how the lack of activity from the transit tax is frustrating. But at the same time, @R-Dub, what you said earlier is the same thing as being like “let’s just build commuter rail; I don’t care if NCRR/NS has any complaints, if there’s no evidence that people living/working near it will actually use it, or it will destroy natural/historical resources”. I don’t know about you, but doesn’t that sound … not okay?

I agree that these studies are just showing things we already know. But do you have a better idea on how to make sure you don’t step into a landmine?

I guess one solution is to be like China. …but… gotta love that authoritarian, “human-rights-can-go-f…-itself” efficiency lol

“let’s just build commuter rail; I don’t care if NCRR/NS has any complaints, if there’s no evidence that people living/working near it will actually use it, or it will destroy natural/historical resources”.

You took a lot of liberty to translate my statement to this!

I argue with your statement about the transit tax because you are factually wrong. In previous posts, I have outlined the ways in which you are factually wrong and you have dismissed them out of hand. If you’re not using bus routes on Sundays, or late nights, or at 30-minute intervals, or in areas like southeast Raleigh or Wake Forest, then yes it may seem that you are not getting much for your money. Fortunately there are tens of thousands of riders on the bus network who are seeing the benefits. Please read my previous posts because I don’t feel like explaining this again, but I will say that you seem to 1) have no idea how many rules and regulations and hoops that need to be jumped through to build and operate high capacity public transit and 2) you seem to think the progress that has been made in barely three years is insufficient because it does not benefit you personally.

Good points, @Kevin. You are correct that I don’t use pubic transport and haven’t read your prior posts. I have ignored expanded routes and hours. My frustration comes from seeing no progress on any mass transit beyond bus … even BRT seems very very slow. Thanks for your post … it educated me.

Thanks for the respectful reply. I know the lack of public progress on BRT is disheartening but I can assure you that it is moving forward through the design phase right now.

Hi all! I’m new to these parts, but I wanted to give you a heads up that NCDOT has a new survey out regarding their State Rail Plan Update. Raleigh DOT just tweeted about it. Hit that up if you can and advocate for commuter rail!

From today’s CAMPO TCC meeting, there is really only 1 viable option for Commuter Rail which is likely to meet the bar for Federal funding…the Durham/Garner most frequent (8 trains/day) option. That’s what they are taking forward. Tons of work and approvals ahead but they are still talking about 2027 or 2029 implementation dates. 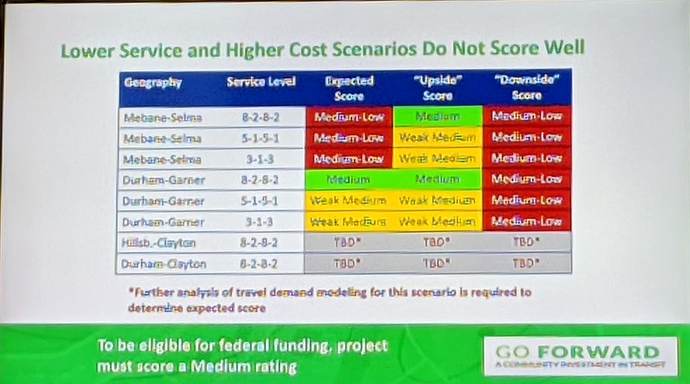 One of the big criticisms in the report that APTA prepared for GoTriangle was that they had bitten off more than they could chew with the DOLRT project. I think Mebane-Selma is an excellent long-term goal, but for the time being, it’s best to just get Durham-Garner up and running. Much higher chance of success if we start small.

Also, @djberryann, would you happen to know if that entire slideshow has been published yet? I can’t find it on the CAMPO site, but I’d really like to check it out.

WOW…and the thinking is these “scores/figures” are for the projected 2027 time frame and or afterward?

Am I missing something?

No, CAMPO now distributes their agenda and presentations via email to the TCC attendees so as a member of the public, I did not receive it. This is what the staff recommendation said: “ Greater Triangle Commuter Rail Alternatives Analysis Preliminary Results
Bret Martin, CAMPO Staff and Katharine Eggleston, GoTriangle Staff
One City Plaza 421 Fayetteville Street Suite 203 Raleigh, NC 27601
Agenda Item:
GoTriangle, as the designated project sponsor for the commuter rail corridor identified in the Wake County Transit Plan, is nearing completion of an alternatives analysis/feasibility study for a commuter rail project within the corridor. The study has evaluated: 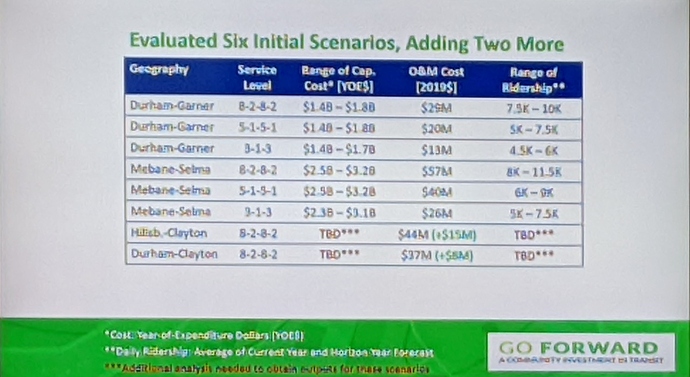