Yeah not the best branding but memorable at least lol.

Perhaps the parking lot for the baseball stadium flooded?

My thoughts as well. Probably in the 100 year flood plain?

Possum Track Road gets my vote.

When Raleigh first came into existence at the end of the 18th century, it was often called “a city of ...

The Jones Sausage factory became a ConAgra plant (where the fatal explosion happened in 2009), which is now the site of the new Amazon distribution center. So you know what this means now, guys, right?

My breakdown of the three concepts for Devereux Meadow. If you haven’t hit the survey yet, please do!

Take this survey powered by surveymonkey.com. Create your own surveys for free.

I’m sure it’s already been mentioned in this thread, but it’s a shame that the city couldn’t also acquire the garages and dealerships to the north of the park.

Hmm… Meander option looks very cool, but is this really a big enough creek to invest that much into it? I guess if they grade it to be more of a bioretention Creek it will collect water, but wouldn’t want a stagnant pond to be called a creek…

Yea, that was also my thought that led me to lean and vote for option 2.

‘Meander’ also cuts up the space and makes it less useful. It is sensible to highlight the creek somewhat, but to make it a centerpiece like that feels like it would be a ‘miss’ to me.

The fact that the earliest that this project could break ground is in 5 years, I’m putting this on the back burner of my mind because I’ve got but so much attention to give. At the point of the video where that was stated, I tuned out. A LOT can happen around this park in the next five years. I sure hope that the stretch of Capital doesn’t sit as is until there’s a park. The new boulevard is nice, but the adjacent landscaping is horrendous.

What about a combination of the Sculpt and Meander concepts, where the northern half of the park has the restored-and-rerouted river that gives off a more natural vibe, and the half south of the floodwater-holding basins are more open?

From a quick collage of the two concepts I put together and edited on PowerPoint… (the blue-gray area is the flood zone, and the gray block is the plaza that bridges over the creek) 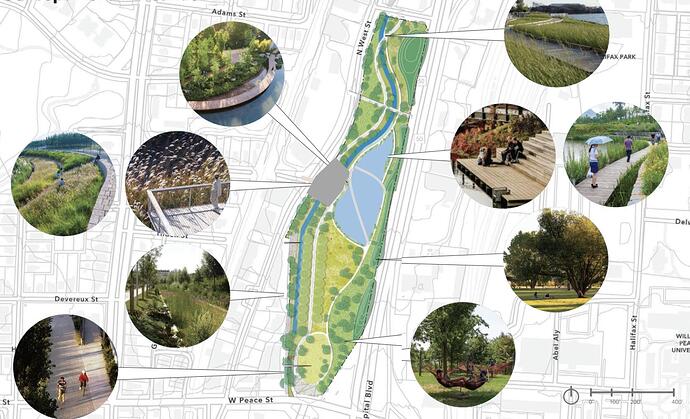 I put something about that in the comments of the survey. Just pick one and build it already, and stop doing studies and discussions forever. Moore Square took like a decade and all we got was some sidewalks and fewer trees, plus a hamburger kiosk.

Public monies must pass through public process…it’s the damndest thing.

I thought all of the proposals were great, but really struck by #3. It reminded me of NY Highline in the defined walking paths allow for dramatic vistas. Any of the proposals would be an upgrade from what’s there now.

Considering how often Crabtree creek floods downstream of this, It’s not surprising stormwater mitigation is a big component of this project.

Back in college, I did an internship with the City looking at stormwater retention/detention areas in the City. One of the things we discussed was identifying areas (near downtown) that could act as a retention basin for stromwater for large sections of impervious area.

Typically (in suburban settings) a developer must have an onsite retention pond/basin to protect water bodies from heavy sediment loading caused during the construction process. These basins are usually (but not always) left in place after construction. Another function of these structures is to slow the water down in its path to the rivers and oceans. It is a temporary pause along its ultimate journey, which eases erosion and pollution at points downstream.

IMO using the new park as an area that can be periodically flooded during times of heavy runnoff (IE heavy summer storms or hurricanes) where not much can be property will be damaged is a great idea. Once the storm water recedes, only minimal effort is required to clean up paths and plazas before you are back in business.

I believe there was a plan to build a new baseball stadium in the Shockoe Bottom of Richmond. There was a big flood in the Bottom while I lived there. Lots of businesses got flooded out and took months to reopen. By building a stadium in the flood area, not much could really be hurt by occasional flooding, and some power washers after the water recedes and you’re ready for another game. Very similar concept as what I mentioned above. The stadium would temporarily “hold” the excess runnoff from the surrounding impervious areas (buildings, streets, etc).

As a some one who works with storm water, you could not have said it better @Nickster. If you can have some type retention in urban areas, it can go a long way in preservation and prevention of flooding.