Then Bury Capital Blvd, you just need one tunnel going both directions until you reach MLKJR Blvd.

Then bury MLKJR BLVD and create a park over it. 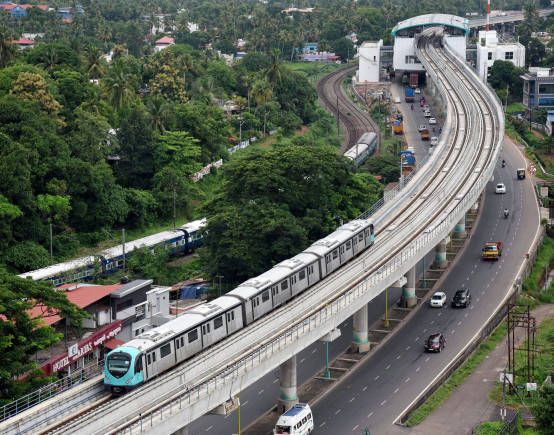 Maybe they elevate the railway and put the road underneath. I think the strip is most definitely not too narrow on most of it and could be widened out as needed. This is obviously all speculation as an cheaper alternative to a tunnel…

How about we just get rid of all the cars and live in a Utopian pedestrian only city?

Also… I love the pic, but it is obviously not in the US, note the the cars are driving on the left side of the road. Private property owners here aren’t really willing to just hand over their land to the government. One BIG issue in the US is that the railroads are privately owned companies, rather than government owned/operated (IE Europe or Asia), therefore they will never voluntarily hand over their property for “the greater good”.

FWIW, the couplet streets downtown were a compromise that prevented a freeway from plowing through the east side of downtown. It was the correct solution given everything.
As for dreaming big, I agree. However, and like I said in a previous post, I’m also a realist. In our current political climate, there is ZERO appetite for any city the size of Raleigh to pursue extraordinarily expensive tunnel type projects.
As for an elevated road, those too are expensive and problematic as they almost always cut cities into two pieces. Frankly, what’s the real difference between an elevated road and a freeway?
While it may seem as if Raleigh is just choking on traffic sometimes downtown, the reality is that daily rush hour alone doesn’t compel me to think about any solution other than improving the one that we already have. If anything, I can imagine putting the couplet roads on a lane diet after commuter rail is implemented. Slowing the speed limit, along with narrowing the lanes alone should also afford us more space for better sidewalk and alternative transport infrastructure. I’m certain that the NCDOT would push back on the narrowing since the couplet is a state road, but I’d really like to see the widths reduced to be more commensurate with the speed limit. I suspect that would be a battle between the city and state.
As I said before, I also support both reducing the speed limit to 30 and re-syncing the signals to allow end to end free flow for drivers who maintain that speed.
I also support removing all on-street parking completely off the couplet roads from end to end. At this point, most of it is already void of street parking. I’d rather give that space back to the sidewalks and boulevard landscaping.

Wow, I didn’t realize that so much support for tunnels was . . . buried (pun intentional) here.

I certain agree with @John that a solution to this would probably require some arguing with the state DOT. But I think that tunneling or elevating a roadway isn’t the right solution, at least now, and in this location, for Raleigh. The two streets now are fairly lifeless with regards to pedestrian activity, and I’m sure that the inhospitable nature of the roads are partly to blame for that.
I recognize that this is technically a major state and US highway corridor, but if we are to make a livable, pedestrian- and transit-friendly city the cars will need to be tamed. At the very least there should be a change in the speed limit or the signal timing.
But if we were to take this a step further, I think converting one lane of traffic on both roads to the opposite direction would be prudent, as it would make the pair a two-way corridor, though still with one direction emphasized. Furthermore, the lanes should all be narrowed a bit, to 10 feet at the maximum. This would probably clear up space enough for a bike lane on one side, and if that could be protected physically, it would be even better.

I believe these are State maintained roads and only the State can decide that which they will not. They are deemed primary arterial roads and have some capacity they are supposed to achieve (I forget but its like 30,000 cars a day…chime in more knowledgeable folks)

I’ve seen the aftermath of about 10 such wrecks since I’ve lived downtown. The most frightening one was a car landing upside down on the patio of what was the Borough. I chased down City and NCDOT officials (as a State PE I can get their attention) in an attempt to at least get bollards (attractive ones of course) installed on the downhill side of each intersection for Daswon and McDowell. The City punted and said they would not consider even funding them if the State allowed them. The State said there isn’t the accident data to support it. I was like you damned idiots, we’re trying to prevent injuries, not wait for enough of them to accumulate to justify installing safety measures. Really they should line the roadside edge of the sidewalk along the entire length of both roads. I stand about 10 feet back when I’m waiting to cross either one of these and regular flip off cars that accelerate through yellows or run a red. If I have one crusade in this downtown it is to make these two roads safer for pedestrians.

I suggest the city fix the crosswalk at Pecan and Saunders before they start tunneling pedestrian walkways. Or maybe adjust the crosswalk at Layden and Wilmington so that pedestrians have more than a couple seconds to cross six lanes of traffic. Its barely enough time to drive through that intersection let alone walk. Or maybe we could put sidewalks in on Wade avenue or any number of other roads that don’t have them at all.

I get that these are just suggestions for the sake of discussion but my point is that the state of pedestrian infrastructure in this city is utterly pathetic. There are so many things that need to be done before we start tunneling under Dawson that the city refuses pay for. How can we ever expect a pedestrian tunnel?

What is up with the crosswalks at Pecan/Carolina Pines and S. Saunders? The signal boxes have been in place for months (at least) but are still wearing “out of service” covers.

We shouldn’t shy away from thinking big, but let’s not ignore the easy solutions, e.g., make the crosswalks at Pecan and Saunders operational and sync the lights on McDowell/Dawson to incentivize driving at the posted speed.

The fucked up thing about this is the fact that it is the only crosswalk for miles along that corridor. There isn’t a ton of pedestrians but that intersection has the most foot traffic south of downtown, by far. You would think it would be a priority getting those signals online but its not and its sad. Its a symptom of a complete lack of respect for and even hostility towards pedestrians. Raleigh will never be a great place until there is wholesale attitude change.

I can think of infinity better uses for the hundreds of millions of dollars that it would cost to tunnel Dawson and McDowell.

My thoughts on these streets: (1) Remove on-street parking and dedicated turn lanes (2) Turn the space saved by removing parking and turn lanes into protected cycle tracks (3) Keep three lanes of through traffic in each direction (4) Keep the signal timing as is.

Using these streets as a bus corridor is also not ideal IMO because it does not get close enough to Union Station or Moore Square.

9 posts were split to a new topic: Development at Saunders/Lake Wheeler

Any plans on keeping the R Line…I think that it will help shuttle folks from Moore Square to RUS if Phase Two of the Development goes full speed ahead kind of like a trolley.

I drive a work truck through DTR every morning up McDowell and most evenings back down Dawson. Frankly if going from the south side of Raleigh to anywhere inside the beltline, straight through downtown is the best route.

Most traffic I see is through traffic, so I think a freeway type situation would be best, with no exits, just S Saunders to Capital. I’m curious if you trimmed these 2 down to 2 lanes, could an elevated road be put right on top of the current streets without greatly disturbing anything around them. Since traffic is split, the above freeways could be 2 lanes if needed as well for a smaller footprint. Mcdowell and Dawson can then have a lower speed limit and other traffic calming measures to discourage through traffic.

Failing that, I would be really against any traffic calming, lower speed limits, etc on those two streets. Likewise I’d be very against less lanes and narrower lanes. If the speeding on the road is the issue, then the city should adjust those lights so you can go from stopped on one end to out the other end, at 35mph, without stopping again. As it is now, you need to go about 42 mph, consistently, to do that.

Either way, someday the city is going to have deal with the lack of any sort of North/South artery.

Well coming from someone who owns a house in South Raleigh and is raising a family in South Raleigh - your morning commute is not on my agenda. Speeding and aggressive driving on S Saunders and Wilmington is completely out of control and something must be done about it. 60 - 70 mph is the norm on that stretch heading into downtown and in my 3 years in the neighborhood I have not once seen someone pulled over. The traffic laws are simply not enforced.

I try to avoid walking along McDowell and Dawson unless I absolutely have to; the speeds some vehicles travel at make it extremely dangerous. You’re just one curb hop from potentially getting creamed. Plus it seems that the way the lights are timed up actually encourages speeding as people race to get through each light.
The only place I’ve ever seen speed enforcement is when police sit under the Western overpass to get people coming from South Saunders where the speed drops before coming into town.

I wonder if, as we see development along this corridor and traffic gets much worse, if that will perversely help pedestrians by making it harder to fly through?

Depending on where you are coming from and where you are going, in addition to the beltline of course, I have sometimes ound Raleigh Boulevard to be a credible alternative.

Any elevated roads through downtown should be completely off the table. This is not the 1950s.

Raleigh considered building a north south expressway east of downtown in the 1970s connecting from Hammond on the south through to Capital on the north, through the heart of Oakwood. The plan was scuttled in one of the very few successful freeway revolts in NC history that I am aware of. If this plan, which was less disruptive than what you propose, got killed, in the 1970s, then no way could that move forward.

The compromise plan we got was to connect McDowell and Dawson under the RR and through to South Saunders.