I can see it being hostile as a pedestrian on Capital at Harrington. I wonder if there’s going to ever be a traffic light put in. The flow through from Capital is what is more than likely making it hostile. It would also cause phase 3 to be disconnected from the other part of the Hollow.

I think even if they just made the traffic coming off of Capital have a stop sign things would be better. I know there’s rules about a minimum distance off an interstate that would be needed before a stop sign is disallowed but Capital is only a 40 MPH expressway at that point and the ramp is pretty low volume and would not queue onto the mainline. There needs to be a stop sign there ASAP imo if signal warrants aren’t met.

They are definitely planning to redevelop Heritage Park for affordable housing. I have no idea what that will look like.

There are about 120 units today, if I recall. It’s a lot of land: about 12 acres. That much contiguous acreage downtown would be worth A LOT to a developer, so I can see RHA partnering with a developer with the land being their contribution, as well as maybe some AH bond money, and receiving a large number of affordable units in return.

Anything less than a total of 1000 units would be a travesty; 2000 is a better target in my mind. 2000 units at 25% affordable would increase the number of affordable units to 4x what’s there now.

Not to derail the topic, but do you know where “they” are in the process of this effort? I was under the impression from the recent rezoning approval of 328 W South St that there was some component of Heritage Park being redeveloped (for AH).

Yes, venturing further off topic, but… The current preliminary concept is very disappointing. Surface parking?? Give me a break!

They are setting aside a parcel along Dawson for future development, but that certainly won’t make up for the unambitious size of the rest of it. 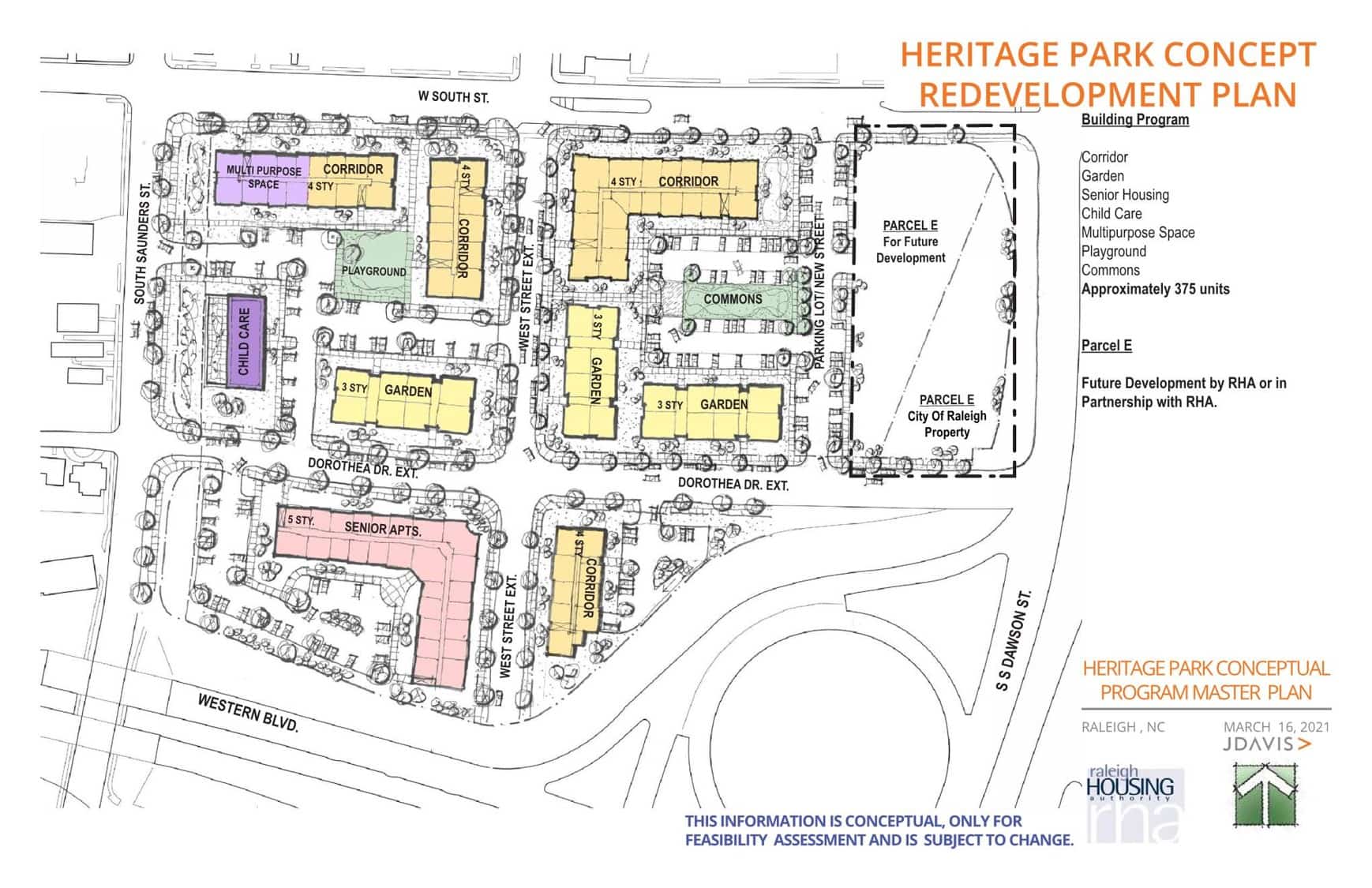 I don’t hate the layout and mix, but at least make the three 4-story apartment buildings something like 8-12 floors.

Well that’s a letdown! Why even bother razing them to basically put them back in place. Who’s over this kind of stuff?

Gotta imagine they are trying to avoid poking the Boylan Heights hornets nest.

I actually don’t mind the square loop as it helps create a contiguous street grid. Western/MLK needs to be slowed down a bit in the immediate vicinity of downtown anyway.

Some 65% design sketches of the New Bern BRT are available for review on the BPAC agenda for May 17: 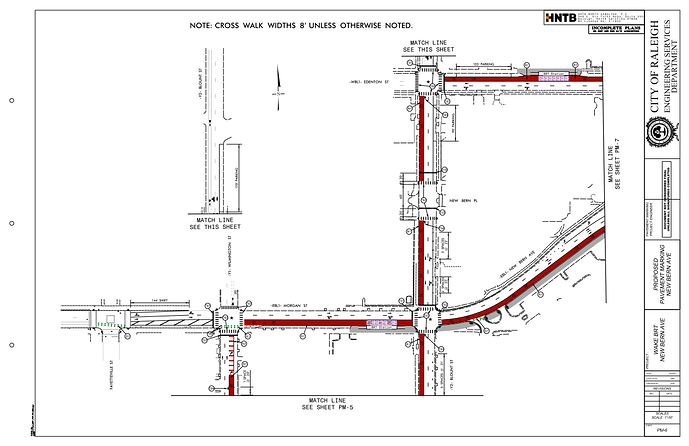 The whole route isn’t shown, but this gives an idea of what might be expected in terms of station placement and lane markings.

Is the bus lane shared with the bike lane??

I believe they are only shared along Morgan from where the bike lane merges into the bus lane just past Wilmington to just past Blount, where it transitions to the off-street mulituse path that will be constructed along with the BRT line. I don’t see any other shared markings.

Last week’s GoRaleigh board meeting included some updates! For example, the names of New Bern line station names are finalized:

There’s also a look at the Wilmington St. stop on the New Bern line. It’s basically in front of Tonbo Ramen and Blalock’s Barber and Salon so that the wheelchair ramp leads straight to GoRaleigh Station:

If you (don’t) like the station design, proposed Go+ branding, station LPAs etc., remember that the city wants you to tell that to their face by the end of this week.

The slides also include updates on bringing more seats to more bus stops (remember that article from last month?) and post-pandemic ads. Y’all can look at that yourselves if you care, though, since it’s off-topic from this thread.

That sounds like a very viable plan for the city to get affordable units by leveraging what it basically has to offer (the land) without contributing the upfront money that’s difficult to find these days.
Connectivity in this area becomes an issue with the sort of density that could come with maximizing the property (2000 as you suggest). For context, Smoky Hollow doesn’t even have half as many units at this point. The West St. connector @ Union Station certainly helps, and having RUSbus transit hub nearby does a well, but I wonder if something needs to happen with S. Saunders St. as well? Is the stretch of that road from Lenoir St. to the Dawson/McDowell merge the right section for future success, or does it need to start looking more like Hillsborough St. with a balance of transit/pedestrian/auto infrastructure?

Someone on twitter mentioned that some BRT stations will have secure bike storage as they expect people will need to ride to the bus station but not need to continue their commute lugging their bikes. That seems like a smart idea. I hope it happens.

At the BPAC presentation on Monday, they mentioned that there will be bike parking but I wouldn’t say secure bike parking at this point (I don’t think they’ve evaluated that yet)

On Tuesday, GoRaleigh’s route committee met and discussed the next step towards making the northern (Capital Blvd.) BRT a thing: sending Requests for Proposals to planning and consulting firms to lay out its future route, and see if this BRT service is worth it in the first place.

Remember, this is the last -and most complicated- of the BRT routes that first became a legit thing over half a decade ago. The Capital BRT was going to be a stub that ended near the Greyhound station on Capital Blvd. in the original plan. Recent decisions by the city gave life to the idea to extend it to a more logical place like North Hills or Triangle Town Center, but this means we now have to figure out:

The answer to those concerns are not obvious, right? But neither engineers nor funding agencies can do anything without having those constraints defined. That’s why the city’s doing a major investment study for this last corridor (unlike a simple LPA decision like in the other three BRT corridors).

Is there evidence to support the existence of this extended BRT corridor? Is it physically possible to make it work with the proposed Capital Blvd. redo, especially around the 440 interchange? How long will we have to wait to ride this (if it happens)? Can we afford a two-branch service without breaking it up into phases? Hopefully, we’ll have an answer to all of those questions and more in a little over a year. 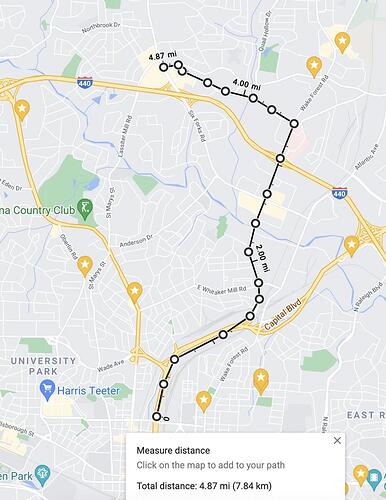 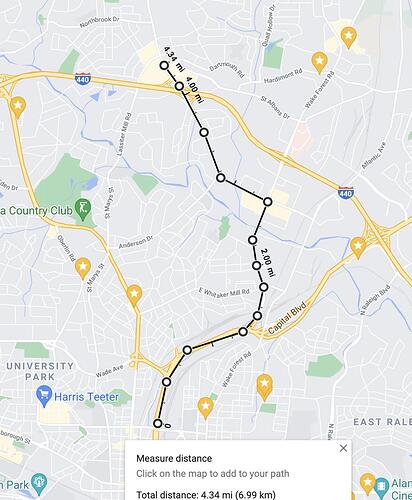 One of these routes makes sense to me. The first one if the Midtown Exchange builds up as expected.

Maybe the northern route can be split into two with Capital Blvd towards Wake Forest being a new line.

GoFast! Works for me.