? It is a red hat. I don’t get the fuss ? (The white logo on the building is a bit odd though to be sure)

Now I have my before and after shots. 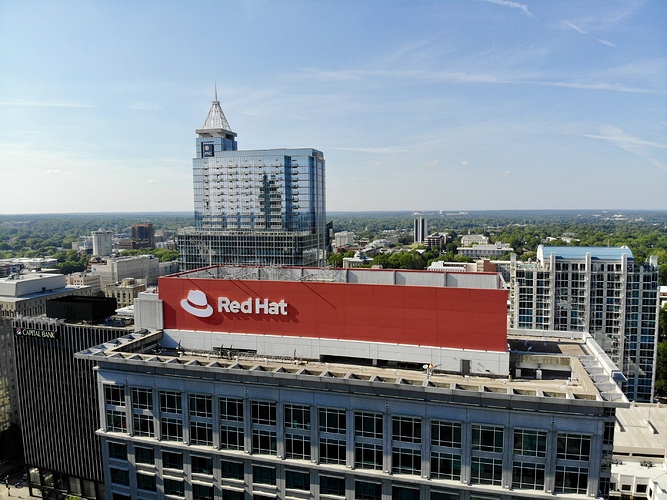 I was kinda hoping they would unveil the logo for us to a giant IBM. (that was a joke)

The logo shows up red at night

This article is reassuring Red Hat and IBM will remain seperate companies under the same ownership. IBM's Rometty: Red Hat will remain independent – 'I don't have a death wish'...

From the day the Red Hat-IBM deal for $34 billion was announced last October, concerns have been raised about whether the Hatters' innovative company culture would survive. IBM Chair and CEO Ginni Rometty reiterated Tuesday that Red Hat would remain...


" “I don’t have a death wish for $34 billion,” Rometty said in a conversation with Red Hat CEO Jim Whitehurst at the Red Hat Summit in Boston.

“I’m not buying them to destroy them. It’s a win win for our clients. It’s a way to drive more innovation.”"

Only time will tell…or…Actions speak louder than words…

For now, though, the market is working in Red Hat’s favor. It may help to understand what exactly IBM and Red Hat do to understand that.

Most supercomputer clusters nowadays use Linux (not Windows) to do their heavy-duty calculations, simulations etc. (myself included). As a hardware and cloud infrastructure company, IBM has their hands in a lot of the circuit boards, processors and all the other physical gadgets that power commercial networks. …but the software IBM makes is closer to an app on your phone than iOS/Android; that’s what Red Hat’s enterprise-version Linux OS’s do.

TL/DR: Red Hat’s not exactly a competitor of IBM, so it makes no sense to destroy them anyways. (They could destroy Red Hat via dumb mismanagement like with IBM Watson, but that’s a totally different problem)

This appears to be finalized.

Execs were swift to go back over the talking points – claiming in emails and Q&As that Red Hat will maintain its identity – even under a Big Blue umbrella.

And that’s particularly important, as analysts have said the deal’s value lies in the retention of Red Hatters.

In his letter to employees, Whitehurst said the promise he and IBM CEO Ginni Rometty made at the deal announcement “has not changed.”

“In fact, our commitment to that vision has grown – Red Hat will remain a distinct unit in IBM as we work to help customers deliver any app, anywhere realizing the true value of the hybrid cloud,” he writes. “This morning, we can share that the most significant tech acquisition of 2019 has officially closed and we can now begin moving forward.”

That probably explains this big meeting over at the convention center. Red Hatters were on the move today. 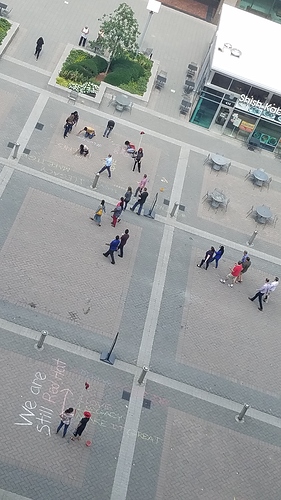 Okay, so when is a Red Hat not…? When it’s Blue…sorry I had to say it

And, you can “say” that your commitment and vision hasn’t changed…

But in fact the mere fact that you “sold-out or sold-to” Big Blue says that everything IS different. Acknowledge that fact, then move forward. And THEN let your actions speak louder than words blowing in the wind on Fayetteville street in the dead of winter…lol

WRAL made a good point that this acquisition leads to a lot of newly rich Red Hatters who could pump cash back into Raleigh through home purchases, investments, or new businesses. This quote stuck out:

“Losing a corporate headquarters is a negative, but this is overwhelmed by the cash infusion,” Walden told WRAL TechWire. “I would expect an uptick in entrepreneurial activity, which is the real engine of economic growth.”

Would love to see more startups (like Pendo) come out of this and stay downtown.

That was a physics joke son.

A quote from TBJ today:

But some say that position could get even loftier, as rumors are swirling that he could be in line for the CEO seat should Ginni Rometty retire.

That would be the only positive outcome to all this but not likely.

Found this little tidbit a couple of days ago.