Chavis Park is most likely overshadowed by all the planning and work being done at Dix. Would you consider Chavis Park to be downtown’s park? It’ll certainly look real nice in the coming years.

I was at one of the Central CAC meetings where they talked about this and showed some renderings. Looks really nice!

Your next area to fly over!

Chavis Park is outside the downtown element, but it’s close enough to count as a downtown park IMO.
Since you mentioned DT parks, I went to the DT element map, and besides the 2 remaining squares, the only park that will officially be within it will be Devereux Meadows after it’s restored.

I was unable to attend the meeting where they gave a timeline for the beginning of construction.
Does anyone know? The city website says Spring 2019, but I haven’t seen any work so far.
Also the distance from Fayetteville St. and Chavis Park is almost identical to the walk towards the planned Devereux Meadows park. They just don’t seem similar since you are walking towards single family homes and the development of downtown basically ends at Blount St.
I used the Wells Fargo Tower as a starting point. 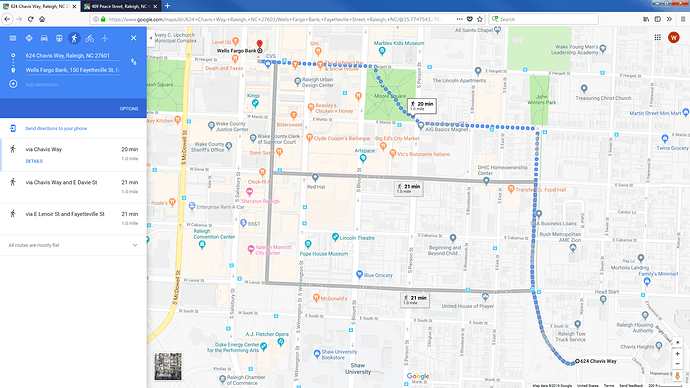 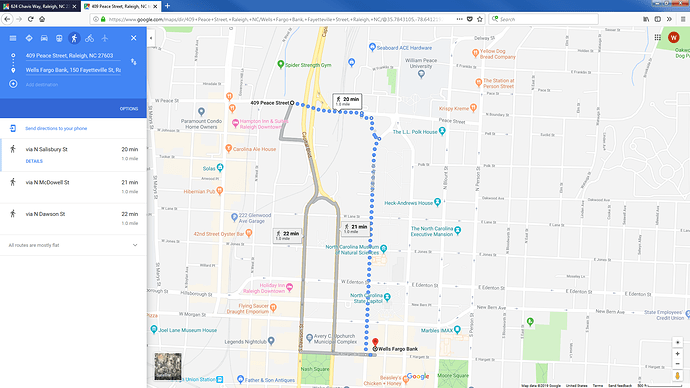 So of course, it depends on where you are coming from, which park is closer. What would really be cool is to see Dix, Devereux Meadows, and Chavis each have unique features so that everyone participates in each in different ways.

I’m actually looking forward to the Aquatic Center at Chavis. The other two won’t have that.

Bikeshare and scooters would make bouncing between parks much easier than in the past.

Let’s not forget about Pullen Park, the OG! They also have an aquatic center!

150-200 ft observation towers at each of the 3 parks would give differing views of skyline and city. Each could have a line of sight to the other observation towers to give a sense of place/scale. Buffered bike boulevards connecting them for looping between them.

So of course, it depends on where you are coming from, which park is closer. What would really be cool is to see Dix, Devereux Meadows, and Chavis each have unique features so that everyone participates in each in different ways.

Yeah, the city center is actually well positioned with the dispersion of the available parks with Chavis supporting the SE quadrant by foot, Dix serving the SW, and Devereux Meadows eventually serving the north side. Even Pullen supports the far western side and adjacent neighborhoods by foot.

The original timeline said the pool would open this summer. Something tells me it might be slightly later than that

Chavis construction is finally going to begin as the council votes to move forward; all in attendance in favor with the exception of Dickie Thompson who wants to send it out for rebid. He was told that the council had voted and would be moving on. He objected. Then he “strenuously objected” then he threw a little fit. Didn’t know much about this guy before but really don’t like him now.

Thanks for the update. I’ll be sure to look for this piece in the video.

I wasn’t able to attend the meeting last night, did they give any type of timeline or schedule?

Nothing concrete (or I may have missed it as I’m “working”) but they did say it is going to be slow because they will be keeping the park open throughout.

Dickie Thompson is a General Contractor, owns JM Thompson and is probably the most developer friendly council member we have. In my opinion he’s generally an all around good guy as well.

I don’t know the background on this, but if he wanted to have it rebid it was probably because he read the contract and saw something in there that was deficient, had been overlooked, or it was just a bad price.

His best option when he sees a problem is to vote against something or object to it. The other council members know his background and if they want to disregard his opinion then that’s their prerogative.

I haven’t heard that Dickie is re-running. I think he’s frustrated by the antics of several other council members and the general dysfunction that’s going on. He doesn’t need to be on the Council to increase his profile and I think he was serving with the best of intentions. I’ll look at it as a loss if he decides not to run again.

All of that might be true but when you’ve been out voted 6-1, it’s really pointless to keep beating the dead horse.

I wouldn’t let his “strenuous objection” be the only thing that influences your opinion of him if you don’t know the reason behind it.

A good analogy might be if you had 6 pastry chefs recommending a lobotomy and one neurosurgeon strongly objecting. I hope the neurosurgeon wouldn’t vote for it just to avoid beating a dead horse.

Yeah but he’s not a neurosurgeon or a pastry chef he’s a politician.
And I’m going to judge a politician by their words and actions. He said a couple of other things that I didn’t understand what he was getting at, about “his district helping” I’m not sure what he was all jammed up about but that’s in part his fault for not communicating better.

Hopefully whoever ends up running for that spot will be a better politician.

N&O posted an article going into more detail about the timeline and voting decisions behind Chavis Park renovations. Says the reason Dickie Thompson voted No was because the bid was $3.6M over budget.

"The council should have waited six weeks to rebid the project, said council member Dickie Thompson, who called the decision irresponsible, given park needs across the city. “I just think that was a colossal waste of taxpayer’s money,” he said. “And it was an election year, knee-jerk reaction.”

Also says the construction could start later this year or in early 2020 and take two years to complete.