I’m sure elevation was the factor but I can’t believe they didn’t try to have it bridged originally.
Just make sure this is one of the gondola stops and we’ll make it work

There is already a tunnel under Dawson/McDowell there, although passing through it doesn’t exactly inspire warm fuzzy feelings of safety.

A bridge there would have a great view, to be sure, and could definitely serve as a gateway- but it just wouldn’t match well with the lay of the land. The trail is ten or twelve feet below the pavement surface of the Dawson/McDowell connector, and to bridge over it you’d have to climb to 20 feet above it, or a total of 30 feet, which means a 600 foot long, 5% steep grade.

So from a transportation perspective, I kind of think they’d be better off rebuilding the tunnel to be wider, more open, and maybe have a skylight in the median to make it feel like less of a… well, less of a dank hole in the ground.

I’d vouch for leaving the tunnel intact and basically having a “detour scenic route” as the bridge for people just coming for the view and pictures.

This would be purely an aesthetics / tourist type thing and since the main path would still be in place you might be able to get away with some steeper grades. You could even make it a stair case and provide a wheelchair elevator as they’ve done on some high grade parts of the Atlanta beltline

I wouldn’t call them stroads. Wouldn’t Wake Forest and Capital north of downtown be better definitions of stroads? I’d also consider S. Saunders out by DTS, and Western Blvd stroads.

I call them all roads…

Are stroads just a way of saying “stupid roads”? In that case, I call them all stroads.

I don’t know, what does StoakCityDylan mean?

Every highlighted road in the jpg is a State Road. Roads that NCDOT pays to maintain. Not the City of Raleigh. State Roads also includes most roads (including those in subdivisions) out in the non corporate limits of Wake County. 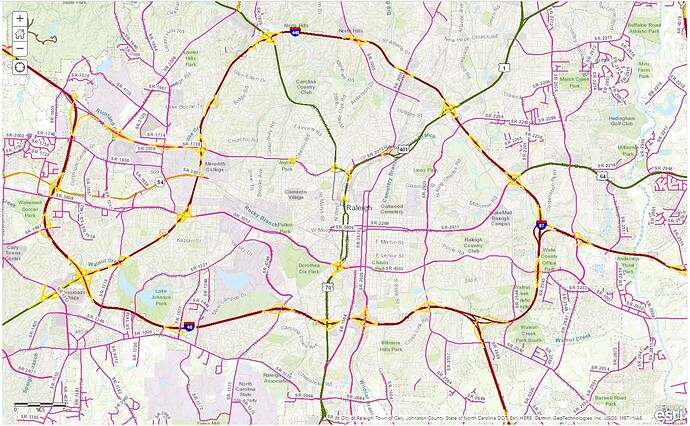 After reading both StrongTowns books, I’ll respond from that perspective.

I would call Saunders/McDowell Stroads because they are designed to be high speed connections between destinations with highway scale features, yet they encounter tremendous amounts of complexity with crosswalks, bikers, cross-traffic intersections, and business entrances. This combination of highway design and complexity creates dangerous interactions that result in pedestrian fatalities and driver fatalities. Saunders/McDowell are designed for two competing objectives, and thus fail at both. They neither succeed at being an efficient high speed connection (road) nor a low-speed platform for value generation and commerce (street).

The solution is to determine whether McDowell/Saunders should be prioritized as a high speed N-S connections, or a low speed platform for generating wealth and value for Downtown. I would think most here agree McDowell/Saunders should be tamed down into a Street, and if that’s the consensus, then we need to slow them down, possibly remove travel lanes, possibly convert to 2-way, add raised intersections, bollards, and/or a host of other traffic calming measures. Then maybe, they will change from a pair of Stroads to a pair of Streets.

On the counter (and I haven’t read either book), if they’re determined to be “high speed connections” between N/S, I imagine they’d need to be either elevated for separation, or perhaps sunken with cross streets at-grade but not impeded by the high speed roads.

Neither seem to make any sense and would be incredibly expensive.

And to make an obvious point, a lemonade stand on the side of I-40 wouldn’t be a very prudent business model. High speed connections are not platforms for building wealth and value, rather they connect places of wealth and value together.

designed to be high speed

Tunnels!! Right under the core of DTR and let the thru traffic zip through!

Stroads are the crap we see up Wake Forest/Falls of Neuse, out Glenwood past Crabtree, up Capital north of downtown and especially between 440 and 540, etc. They are neither a street (which is what we have in the downtown grid), or roads (which are like NC 50 north of 540 and take us from one place to another). While the couplet of one way roads may pass traffic through the core of the city, they do not meet the definition of a stroad. Most of the stroads we and other cities have used to be roads that have absorbed the role of a stroad as suburbia transformed them over time.
It’s perfectly reasonable to not want pass-thru traffic patterns of the couplet downtown, but I’d remind us that this was the compromise that kept a freeway from plowing through the east side of downtown, and I think that Raleigh was damn lucky to have made that deal with the state. While there is definitely traffic that just passes through downtown on the couplet, their north and south terminuses also represent the main access points to downton from points due north and south of the city center.

Better yet, regional rail service to do more of the heavy lifting.

Stroad is a combination of “street” and “road,” in the case of a corridor that tries to prioritize through traffic while also building wealth in the form of businesses and residences along it, and fails at both tasks.

Stroads are very simply just any subdivision street, road, highway, interstate that is maintained by NCDOT. That is it. Nothing else. Speed limits don’t matter. Number of lanes don’t matter. Nothing else matters. If you noticed on the picture that I posted earlier that Hillsborough St (Between Glenwood and 440) and Lake Wheeler Rd (Dix area) are no longer stroads. Raleigh has now taken over these in order to construct them in the way that they desire.