Let’s do a WebEx or Zoom or something. Send me a private message if you’re interested and we will work out a time/ method

OK, I’ll go ahead and let this loose into the wild. Looking at our idea of re-engineering the legacy rail corridors in/out of Raleigh with multiple, non-automobile, uses, I dub thee… 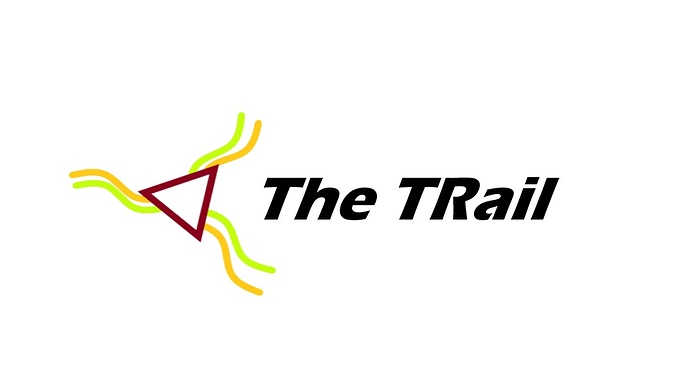 Can somebody share the powerpoint presentation for the rail consolidation? I can’t find it anywhere. @orulz that was your creation correct?

Thank you! I hope you don’t mind I shared this presentation with the Raleigh YIMBY listserv

TBJ has an article today on the possibility of Raleigh-Fayetteville commuter rail. Apparently in January Fayetteville City Council expressed support for the second phase of a study into a possible system. 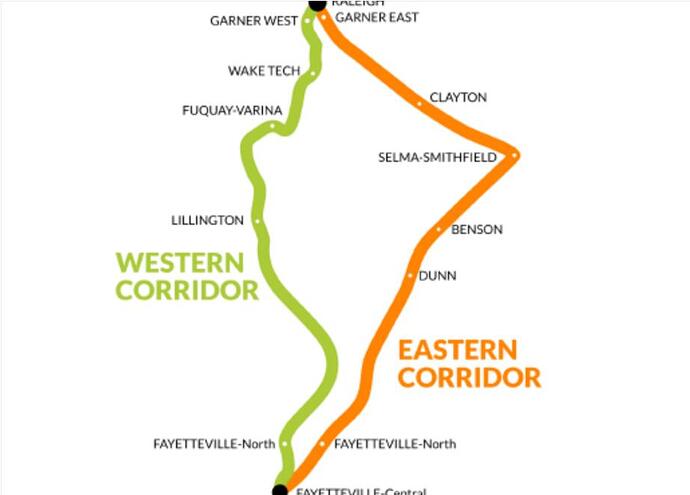 Some highlights from the article:

One of the biggest differences between the two routes is travel time. The western corridor contains more turns, meaning the train could only reach speeds of around 25 miles per hour on most parts of the track. The eastern corridor, however, contains more straight lines. The train can reach speeds of up to 70 and 79 miles per hour for large portions of the journey, the study said. Graham said the time difference between the two options is about 45 minutes to 90 minutes for the eastern corridor, and between 90 minutes to 2 hours for the western corridor.

The capital costs of getting each line ready for passenger service differ, too. Projected costs for the western corridor would be around $131 million, compared with between $169 million to $175 million for the eastern corridor, the study said.

The study also said projected ridership would be 13 percent higher on the eastern corridor.

Phase 2 of the study will develop more fine-tuned cost estimates for each corridor. Graham said Phase 2 will eventually pick a preferred route for the rail service.

Graham said it’s still early in the process, and it’s not known if a new organization would operate the line or if it’d be the North Carolina Department of Transportation’s rail division.

“We’d probably end up maybe implementing some type of special transit tax, maybe a penny sales tax in order to pay for the initial local match cost for implementing the service from scratch,” Graham said. “Maybe we’d have to build a new station in both locations, or a midpoint station in Selma.”

It’s surprising to me how optimistic (or at least, not immediately defeatist) the Fayetteville MPO’s director sounds about putting a penny sales tax on a ballot. Then again, they did go out of their way to build a new downtown transit center near their Amtrak station and invest more in their transit system despite not increasing property taxes last year.

I really hope this second phase of the study can come up with clever solutions, though. Judging by their proposed goals, it sounds like planners aren’t sure if the freight rail companies, NCDOT, and other rail projects (SEHSR and GoTriangle’s commuter rail, for starters) would become supporters or obstacles. Depending on that and how their engineering scope/cost estimates go (read: if trains can run quickly, frequently, and cheaply enough), we could go anywhere from a surprise endorsement of the Artery to this project being dead in the water…

Oh by the way, since no one posted it on this thread, here’s the full report for Phase 1 of that study:

f this is the case then the Durham-Raleigh Faquay Vaein Commuter rail Line should be accelerated. Obviously Fayetteville commuter plan isn’t expensive if its $100 million or a little to build it,

I’d be very surprised if they opted for the western corridor. I like the routing better, especially considering that the eastern corridor overlaps with the Clayton-Durham line (which will probably be extended to Selma at some point) and existing Amtrak A-Line service, but 25mph isn’t going to cut it, and upgrading to anything better than that is going to be expensive. It’d be huge for Lillington and Fuquay-Varina, though.

Here’s my (uninformed) two cents, since they absolutely should make this corridor happen one way or the other: pursue the eastern corridor. Split the cost with GoTriangle for double-tracking the H-Line; that needs to be done anyway, might as well get FAMPO to chip in. Build it out, establish a ridership base, and start working on NS/VF line upgrades. If we do a good enough job with TOD and what would, by then, be three commuter lines into Raleigh (GoTriangle, S-Line, Ral-Fay), public perception will have shifted in favor of transit for this region (and I’ll be, like, fifty lol). That shift gives you permission to just start overhauling every single line in the Triangle area, and suddenly Fuquay and Lillington have frequent all-day rail service. I cite Denver’s rapid (by US standards) regional rail expansion as an example.

That’s my pipe dream. I might be dead by the time it’s fully realized, but maybe future generations can enjoy it.

If it helps at all, some of the rail improvements that they’re proposing (and should’ve factored into cost estimates) for the eastern option involves making them fully double-track. The report has this map of current and proposed track features; notice how only the eastern approach will end up being fully double-track: 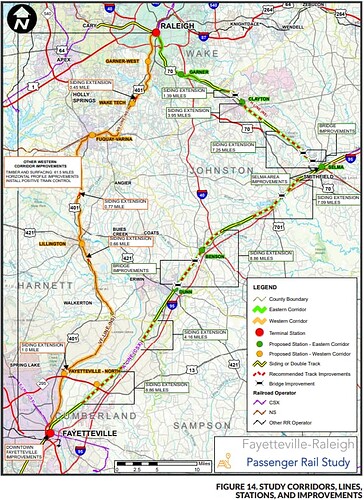 The report included a comparison of benefits and concerns for both eastern and western fronts concerning how to operate trains and what features stations must have. I felt like the eastern option had fewer pain points, too, but it also depends on majorly redoing a rail track crossing in downtown Selma that costs more than $10M.

The paper suggested two options: a cheaper one where a short line of tracks are built where trains could stop and switch directions (this involves train operators moving back and forth within the train, so it’ll take longer and look kind of silly), and a more expensive option that looks like something
@orulz thought of a while back: 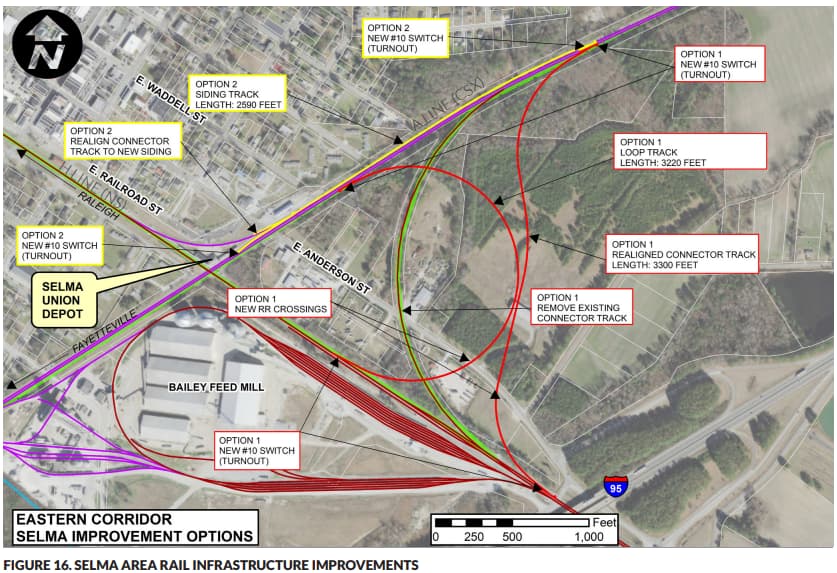 The TBJ journalist didn’t do the math right, though, since it seems like they only looked at one of several things they’d need to build. Here are the numbers I read and summed; the cheaper item is bolded:

Is the worse service on the western line worth it because it’s cheaper to build? Sadly, that’s hard to say with the data we have now. I don’t trust this study’s ridership forecast because their prediction model might not reflect the services or passengers we’ll truly see. It’s based on Amtrak’s past services where trains run 4 times a day.

I hope this project happens, too, even if it means I’m old and senile by the time it’s running. But I’d like it to be done based on sound math and economics, and we’ll need to see Phase 2 of this study before we can say one or the other

I say the east route because the Raleigh to Fuquay-Varina corridor could be part of a rapid transit rail system, like a metro due to future density in this region.

That’s an interesting idea, assuming you meant west route. Maybe they could do something like the Sprinter, a peculiar little line that runs from Oceanside to Escondido. It operates kind of like light rail, but shares the ROW with freight and runs with small DMUs. Service runs every thirty minutes, so it’s not quite light rail, not quite commuter rail. San Bernardino’s Arrow, which is expected to open before summer, will run a similar operation.

Lots of opportunities for TOD on that route too (for now). The biggest problem, of course, would be that Norfolk Southern owns the line, and they… do not play nice. Ever.

For some reason I could see higher ups going with the West route as it touches a Wake Tech campus and could also help out Campbell University too by going through Lillington. Lillington and Buies Creek are not far at all and could see some BRT built into the Lillington station.

EDIT: Just realized that’s the same Wake Tech campus off 401 where the 540 expansion is supposed to go through. Don’t know if that would add an additional layer of complications or opportunities? Having a train station near the big 540 interchange and a main thoroughfare (Highway 401)…

Agreed, Wake Tech is the easiest ridership win of both routes, especially if you can run all-day service. Didn’t even consider Campbell, but imagine how great it would be for students to just take a shuttle to Lillington and hop on a train to Raleigh. Makes that campus feel a lot less isolated.

Also, here’s something that seems to blow my primary concern out of the water: 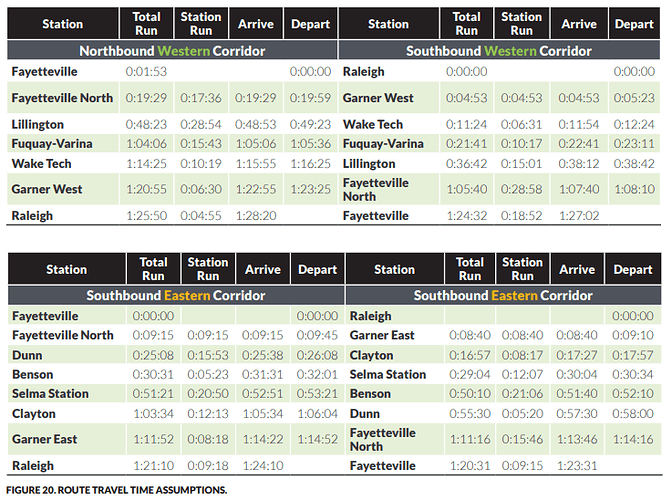 You’re only looking at about a four-minute difference between the two routes, and only fifteen to twenty minutes more than driving (assuming there’s no traffic). That definitely makes west a more viable option.

Factor in too they have their law school in downtown Raleigh not at all far from Union Station. Would make traveling back and fourth between those two very easy.

Hey, good for Fayetteville trying to link into the Triangle in this way. I think they smartly realize that their city/region could become a very affordable outpost for Triangle workers if this comes to fruition. Big if.

Can you imagine threading the Boylan Wye backwards and forwards with every operational move by using the ‘Western Corridor’ alignment? It boggles the mind that they even thought to include that in the analysis and stated it with a straight face.

This is really interesting news. Do you have any more details, or a source? How long are the terms of the lease?

I wonder why they would sell it south of Fuquay, while merely leasing it to the north? Do you have any details about active customers on this stretch? About the only major customer I see on this line is Johnson Concrete, ad that’s at the very southern end. There are a few spurs just south of Tryon Road but it doesn’t look like they’re very active. Not that there is zero potential, but there just isn’t really much there today, at all.

Does NS view Raleigh-Fuquay as strategically important to their network somehow? Or are they holding on to it thinking they could sell it for a tidy sum to a government entity, as a transit route, rail trail, or some such?

What are the (rumored?) southern limits of this sale/lease? There are some pretty big shippers on the line in Fayetteville like Goodyear and Fay Block, and it’s hard to image NS letting go of serving them directly - but then again, Fayetteville is a dead-end as far as NS is concerned, so I guess that’s what’s on the table.

What about the currently inactive line from Fuquay to Brickhaven? Is that in the sale/lease limits as well?

Any thoughts or ideas on how RJ Corman might plan to operate this line? Would they operate it from the north out of Glenwood Yard? Or could they operate out of Fuquay, and interchange with other RRs at the endpoints in Fayetteville, Brickhaven, and Raleigh? If they do interchange in Raleigh, would they need access all the way to Glenwood Yard, or would the interchange tracks on the southern leg of the wye be enough - leaving a possible opening to close/eliminate the diamond crossing at Boylan?

This obviously has some implications for the Artery idea, although I’m not entirely sure if it’s an opportunity or an obstacle? 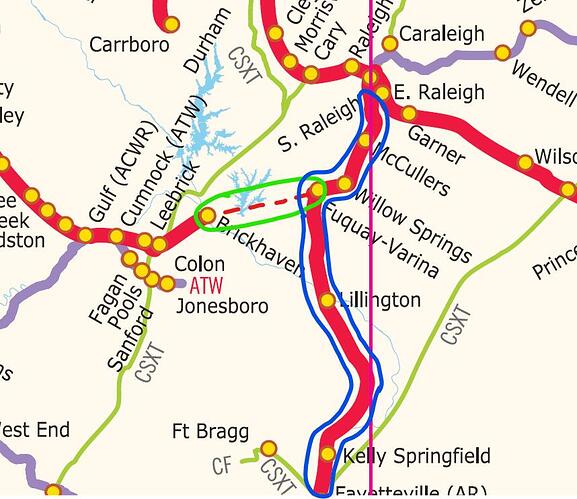 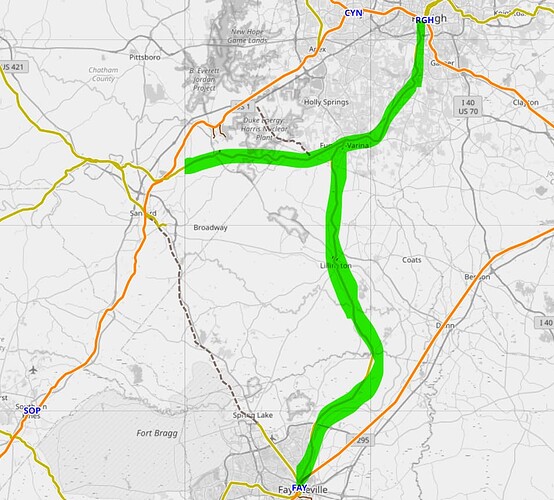