Federal, State, County, and City properties all do not pay property taxes.

The current legislature is NOT going to do anything that benefits Raleigh…period…“too many liberals…”. They’ll ignore the fact that Raleigh is also “their State Capital” and a that a healthy State Capital is good for the State…

So don’t hold out hopes of seeing anything like this materialize anytime soon…unless a building collapses…and then they’ll probably try to move the jobs to Granville County…'cuz Rawleee has too much stuff…so we’ll just pull jobs and put them in some backwoods county, citing ‘eco development of a poor county’…

I’ve kind of come around the bend on this actually. There are very few buildings above 200 feet in Washington, D.C. yet it’s one of the densest, most walkable places in the United States. And as long as we have so many redevelopable lots so close to the center of everything, building medium height (lets say in the 6-12 story range) on the outer band of our already urban areas will continue to be the most economically viable for most developers (and thus also for potential tenets).

The below swathe of land starting directly next to Red Hat is 90% unbuilt land, surface parking and 1-2 story buildings (mostly SFHs). This starts only one block from the tallest building and the densest street in Raleigh. That’s a chunk 15-18 blocks of basically non-urban form land use within easy walking distance of the core of downtown. While I would love if we got some 15, 20, 30 or even a 40-story building over here to really pull the border of downtown out over here, If you put even 5-6 story buildings on all of these plots, it would likely suddenly be the most dense section of Raleigh outside of Fayetteville street (and maybe Glenwood South once Smoky Hollow is done?) 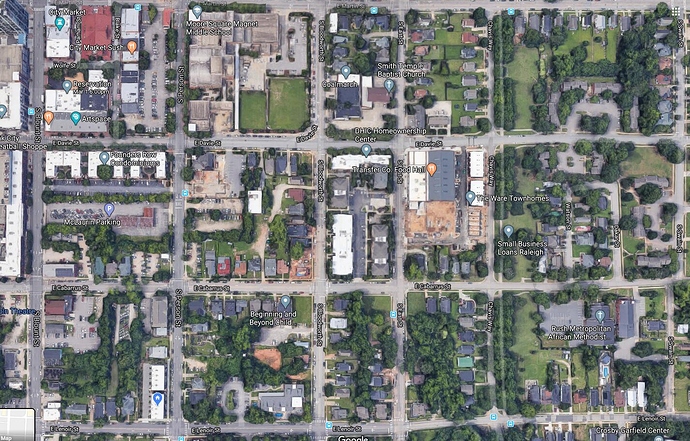 That all said, I do think anything that’s only 3-4 stories that’s already in the middle of downtown surrounded by dense development could be seen as a missed opportunity. I just think saying essentially “if it’s less than 15 stories, it’s pointless” is probably unrealistic when there’s still so much untapped potential in Raleigh. We’ll get there eventually, but there is a lot of ground to cover (literally) before we do.

Sorry, I didn’t mean to pick on your offhand comment Jake; I just started typing, entered a fugue state and ended up here.

Thanks! I appreciate that information.

No, I get that completely. Definitely happy for more density, no matter the height, but will always pull for taller development whenever and wherever.

I was walking around this neighborhood the other day and I agree with you. I would hate for there to be a lot of teardowns because I think the neighborhood has a lot of character as-is, but all those gaps in between buildings would be perfect for 3-4 story mixed use, gradually getting taller as you close in on Moore Square, which I’ve said before is the city’s biggest non-Union Station transit hub and thus needs be densified big-time.

Looping back to the state government complex, I know that the legislature in its current composition would rather demoralize its employees and have the buildings fall apart around them than do anything constructive with their potential gold mine of real estate in that area. McCrory, for all of his problems (and God knows there were plenty of them), was on the mark with Project Phoenix.

I really feel it for the employees basically being forced out. At the same time, I’m hoping this site can be sold to a private developer.

If it is, I hope the developer will offer some serious transit-based improvements, height, AH units. This site has/does benefited from a lot of public investment and will be right at the BRT stop and still within walking distance of other employment opportunities, parks, community ceneters, etc. No 2-3 story brownstones or even Blount St. Commons-type proposals.

…you know it will end up a parking lot for a very, very, very long time…

Sadly, because the property will be with DoT (not automatically sent to Disposition), this is especially possible. But hopefully not… It will be a while before anything happens there no matter where or who it ends up with Private/Public/etc.

NO taxes, but seems i have heard state does contribute some money for fire and police protection but that was years ago.