Nice one popped up on the wire. Will have to dive into it later but feel free to look over the submission and share what you see.

Pretty run of the mill design. But apartments are 100% needed in downtown, so this project is welcomed.

Screenshots from the file: 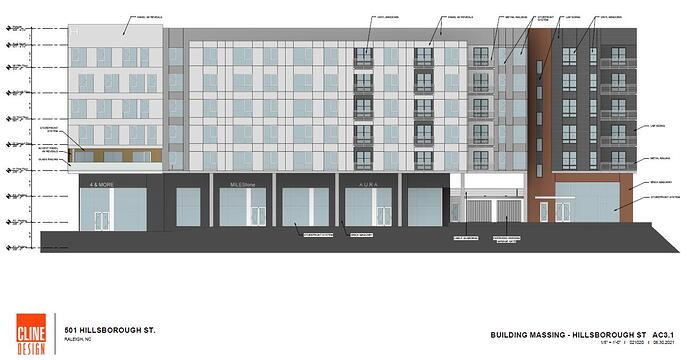 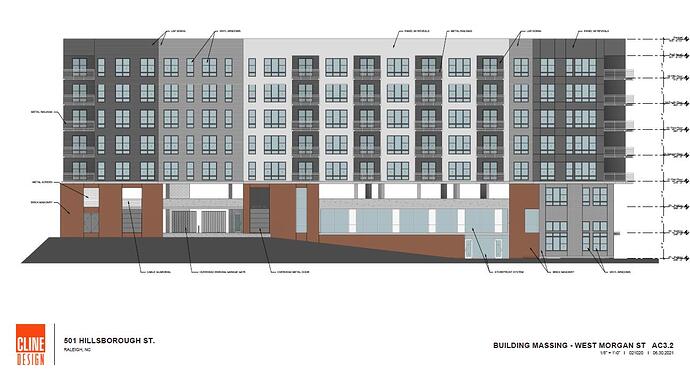 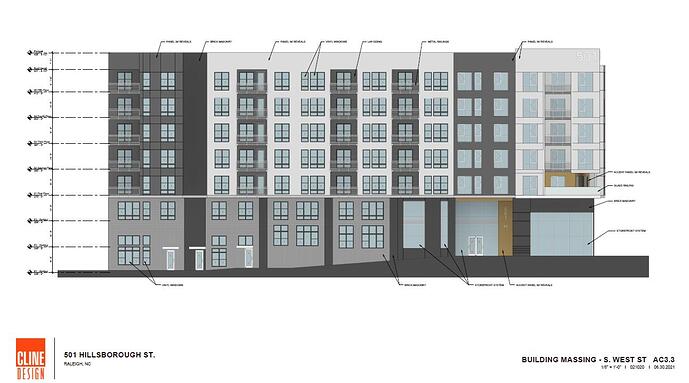 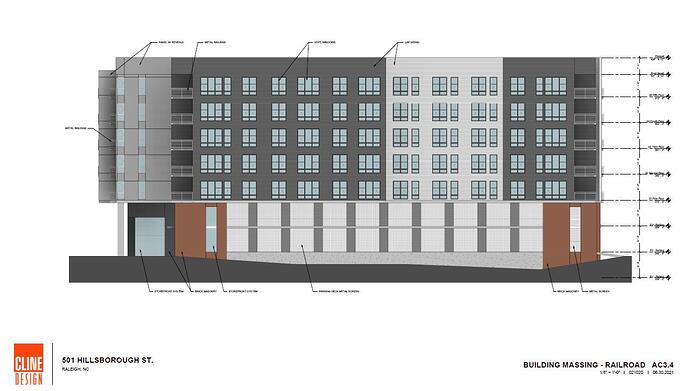 Here’s the location, in case you were wondering: 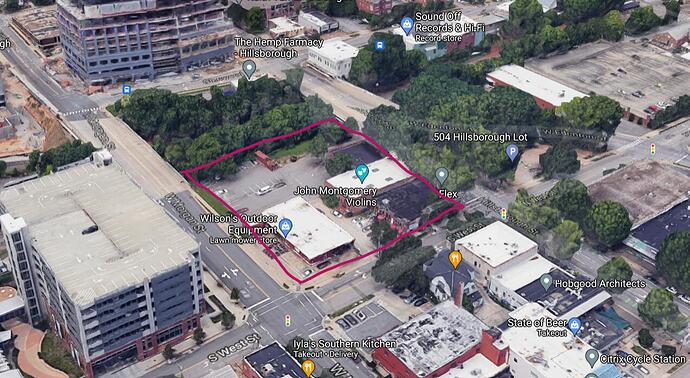 Was not there something proposed for this block a couple of years ago? Was thinking it was something like B83 sized???

This is more good than bad, but man I sure would love a smaller project that fills in the gaps of these snaggletooth lots instead of the raze and McApartment treatment… I like the vibe on Hillsborough with those older storefronts, and it would be great if there was vertical infill along Morgan and West, and remodeling along Hillsborough. I know I know… Armchair developer here… but the same approach could have happened on the 401 block and that portion of Hillsborough could be a more pedestrian scaled corridor…

Ugh I hate this. We should certainly try and keep those storefronts and I will miss Flex so much

Those storefronts have been derelict, virtually empty, and crappy looking for the 12 years I’ve lived here. I wouldn’t mind keeping all the smaller scale older stuff there, but it’s obviously not working. This is better than nothing, and helps continue the connection-building between the different districts of downtown. Still wish 401H would get going (and phase 2 of Raleigh Crossing).

Is it the location’s/buildings’ fault they were derelict or the owners of the building. Or being good stewards. It’s like no one ever tried. These are great small spaces that we all clamor for, but the owners never did anything with.

(Opens thread)
501 Hillsborough… I don’t recall seeing a rezoning for that address. This is a bit of a surprise!
(Checks map)
Yep, those buildings are past due for redevelopment, checks out
(Reads details)
Oh, there’s no rezoning because it’s just an 8 story apartment building. Boring, but, fine I guess.

Never a fan of the old council’s move to rezone downtown Raleigh with such low as-of-right heights. But at the same time, nearly 200 units per acre isn’t exactly disappointing, either. (side note: if private capital can build this density, then so can RHA at Heritage Park)

This close to Union Station, however, I would honestly prefer more office. Block 83 and Dillon get this right. It’s like:

This does nothing for me. Glad for the density but it’s beyond underwhelming.

Anybody see how many parking spaces? (So I can be mad at the probably outrageous parking ratios)

A bit nicer than a traditional 5 over 1 and at least the parking deck is mostly hidden. Glad to see some action on this block but this is in my opinion one of the most prime blocks in downtown. Would have liked to see 12 stories. But with the state of things right now we’re probably going to see nothing but residential the rest of the year. Not a bad thing per say because it’s more residents but new office is still dead for a while. Hopefully we can get some hotel / condo tall surprises soon.

For such a key block that connects the Warehouse District to Glenwood South, this is highly disappointing. Just the other day I walked along that strip of storefronts and enjoyed how it felt to be there and dreamed of them being more engaging and activated.
I swear to God that I’ll scream if they rip out the oaks that line Hillsborough there and plant baby ones in return. There’s a really pleasant and formal rhythm of trees on that section that’s befitting the approach to the Capitol.

York Properties had a 12-story proposal like 10 years ago. And yes, I remember Heritage (Bloc83) hinted at high-density residential for this block a couple years ago - which I assume would’ve been taller than this. But that was before they shifted their next phase to the old Moonlight Pizza corner.

I’m with everyone else here, I can’t complain about the additional housing units in such an in-demand location, but I really think the developers should’ve aimed a little higher (no pun intended) for this parcel, considering it’s walking distance from RUS and has Bloc 83, Citrix, etc. surrounding it.

This is ATROCIOUS. It’s bad enough it’s yet ANOTHER B.S. stick-built apartment building that LOOKS LIKE AN EXACT CARBON COPY OF EVERY OTHER DAMN CHEAP P.O.S. APARTMENT BUILDING that is PLAGUING the entire country, but IN THIS LOCATION??? BOOOOOOOOOO!!!

Don’t scream without me. Just let me know when and where.

Were the oaks removed for Raleigh Crossing? I can’t recall, will have to take a look later.

I have confidence they will be able to save these trees considering the good job 301 did with saving the ones on Hillsborough.

Luckily the developer is adding retail facing Hillsborough St. but they will never replicate the previous brick ones. I’m hoping the best and maybe new residents living upstairs will help, but this is a fickle location for successful retail. Walking across the bridge coming from Glenwood on that narrow sidewalk feels like your going to get clipped by someones mirror. Or even trying to navigate that awkward Y intersection on foot isn’t a good idea either.

My biggest take-away from this block getting redeveloped is Wilson’s Outdoor Equipment. I’m sure most on here don’t care and even a majority of downtown residents don’t care. But there is no where close to downtown that sells small engine and lawn equipment like they do. Two weeks ago my weed-eater blew the top-end of the engine and surprisingly they had all the parts to fix it, Ace hardware, or the Handy Man Hardware wouldn’t have 1 of those parts.