Bike Lanes in and around DTR

exactly. How many of these 8 cars that are X-ed out are actually his customers? And how many new customers could come by bike?

Agreed - love the place BUT this is why small business owners can be their own worst enemies.
Embrace the change out your front door…
Otherwise, something like the Cardinal figures out your program and improves it…

I think all lunch oriented restaurants are struggling because most of the workers haven’t returned yet.

I’m not saying that they have to abandon their old school charm or anything, but at least make the place look like it’s open, not run down and closed.

That is my feel too. I have been 2 times and they were both times I was walking around the area and happened to be hungry so I went in. I think I may have parked 3 or 4 blocks away once but never in front of it. 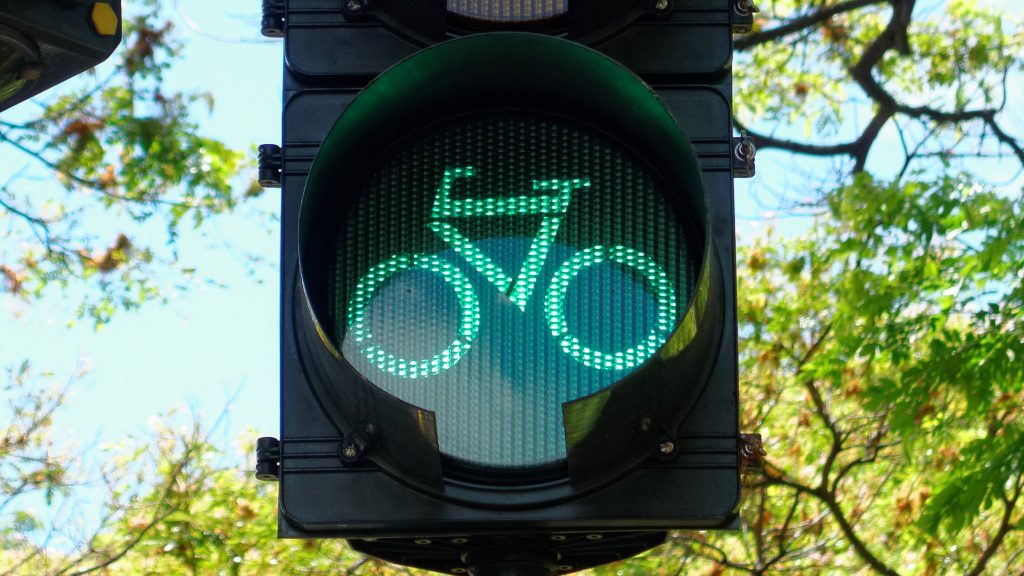 "Bicycles are making our cities better, but what about our suburbs?"

Looks like the Triangle Bikeway’s preferred alternative is starting to be put together! The Durham-Chapel Hill-Carrboro MPO’s meeting this Wednesday will have a presentation with updates on this project.

(Note: CAMPO is also a stakeholder agency for this project, but it looks like they just stick to verbal updates about this project.)

The study team seem to be converging this preferred route: 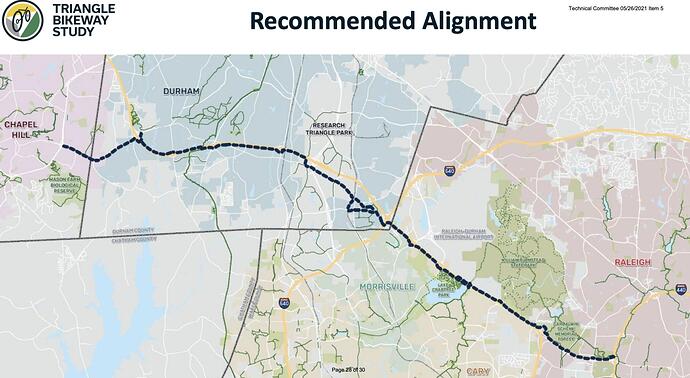 It looks like the route east of RTP’s largely a greenway entirely separated from I-40; it will not just be stuffed into the side of NC54 or another local road. Here’s a preview of plan sheets around I-40’s exit at Aviation Pkwy. You can see raised mounds on the edge of the highway’s right-of-way; this is where the greenway could run.

I’d take this study’s conclusions with a grain of salt, though: the study grouped together responders to four categories of cyclists and used the Portland Bike Study as a baseline to see how skewed their survey sample was. If you assume Triangle residents as a whole have the same distributions of attitudes toward cycling as Portland’s, regular cyclists who know what they’re doing are very over-represented in this study while non-cyclists are underrepresented.

We don’t have pretty renderings for this project, yet, since there’s several aspects that are not yet defined. There’s a survey coming out later this month so the project can learn from you about specific design features like:

I love the idea of this, as the area between Raleigh and RTP is lacking some serious bike connectivity. This may get me to bike commute to RTP. I have looked at routes and nothing currently seems very pleasant.

I hope its to be done right. I can parallel I-40, but not right next to it. The last thing a biker wants is 8-lane traffic noise and exhaust fumes in full sun heat. Hopefully it will be separated some, with some shade cover trees.

There’s 80 feet between the outer edge of the shoulder and the bikeway (see the last non-hidden image, highlighted in yellow). From the bigger map, it also looks like there’s plenty of room for trees to remain intact there, too. I’d prefer not to bike right next to a freeway, either, but I think that’s more than enough of a separation to be and feel safe.

Yeah that actually sounds pretty good. Didn’t mean to be critical. Almost anything will be an improvement to what we have now - no practical (safe) bicycle connection between Raleigh and RTP.

Citylab article on proposed Greenway Stimulus. Mentions Atlanta’s beltline and the East Coast Greenway which is based in Durham goes through Raleigh.

atlantic always seemed busier to me near the spring forest area and pattern busy near highwoods mostly going north. i used to ride Atlantic to downtown raleigh quite a bit and from six forks to in town it was pretty empty. that was a few years back however.

TC-3-21, which will amend the Raleigh Street Design Manual to make curb-separated bike lanes standard on arterial roads is open for public comment until June 11. 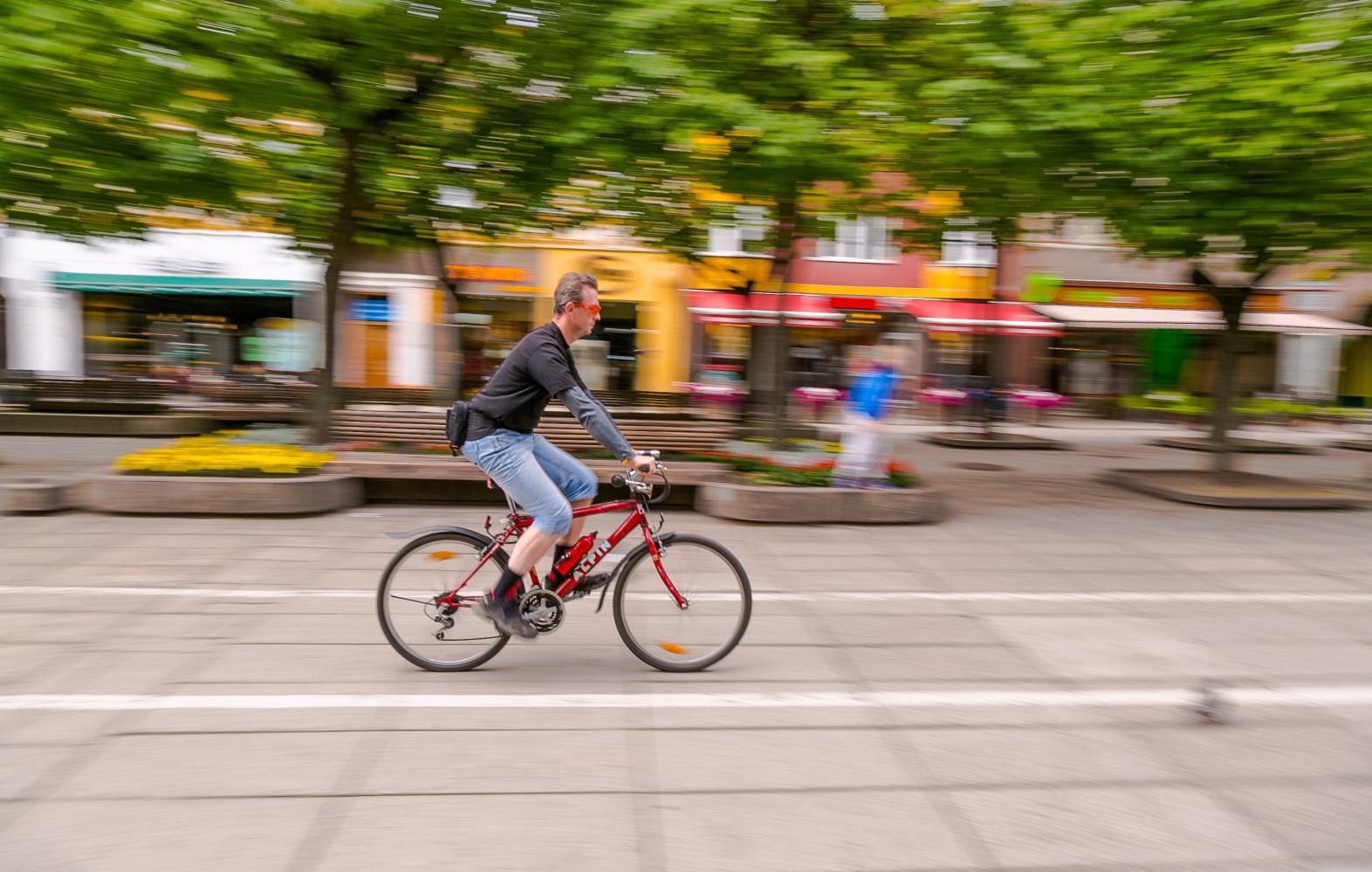 This text change proposes to: Amend the layout for the avenue street types. This allows the City to move bicycle lanes out of the roadbed and behind the curb; and Revise corresponding sections in the Raleigh Street Design Manual Read the full...

The Triangle’s contribution to the East Coast Greenway can hold its own with any other place along the route with much of its part being off road trails compared to much of it still being on-road.
For the last 18 years, I’ve ridden my bike from Miami to Key West on fundraising ride, and every year the “greenway” has improved and made the ride more enjoyable and safe through the Keys.

Next week’s meeting for the Planning Commission’s Transportation Committee will discuss changes to how some roads and bike lanes will be laid out in the future. Here’s an example that’s relevant for downtown:

…and how different lane widths (in feet) could be for a 3-lane (1 each way + one turn lane) with curbside parking with this proposed change: 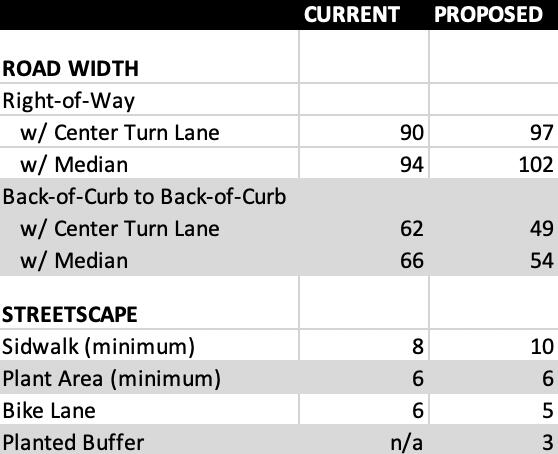 Basically, they’re proposing that future bike lanes be pushed behind the curb so that it’s more like a bicycle-only sidewalk rather than a bike lane on the road. This change may require additional road-bike buffers (read: buy more rights-of-way). But in return, they could be be cheaper to build and feel safer for cyclists thanks to the grade separation.

Also, shout out to @RaleighBikeLady, whose name I saw while scanning through the public comments!

I used to go to school on that same block!!!

2 public input session on this tomorrow. 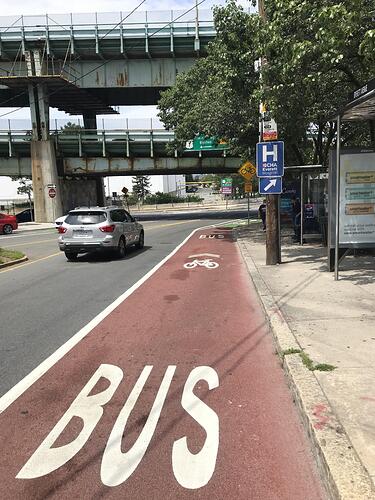 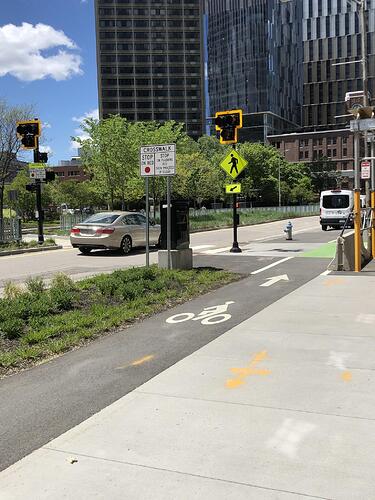 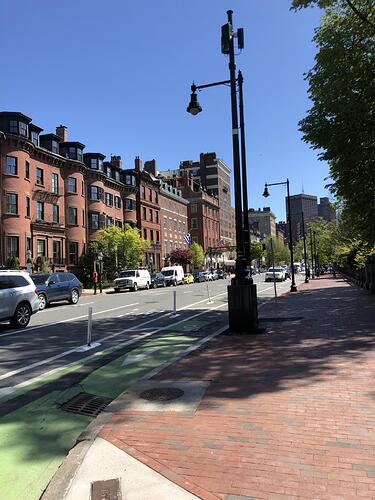 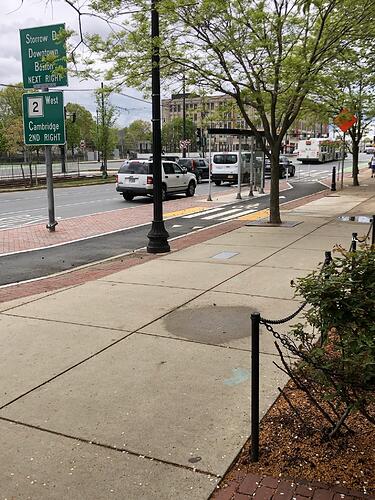 I just hope the NCDOT and RDOT can collaborate to make something like this happen on this street.