Bike Lanes in and around DTR

State maintained street improvements (US 70 & NC 50) will be a state government decision. I had hoped for a roundabout or perhaps a divided thoroughfare with a stormwater structure between the lanes at Glenwood-Anderson-St Marys, but the city is developing a stormwater structure on the city owned pocket park at Wake Drive. No coordination between the 2 bodies and thus, good luck with the state & the coordination of bike lanes. Outbound #6 bus-stop at this intersection lacks access for pedestrians coming from the southeast quadrant and for any Anderson Drive pedestrians. What a cluster for nonmotorist. Be prepared to sprint through a couple of nonmarked crosswalks and drivers hitting 60 mph+ on Glenwood. A coordinated plan could have been a shovel ready Fed infrastructure project. But alas….

As time goes on, state DOTs are starting to think more outside of the box. I mean this in the most PC way possible but typically state DOTs are more “stuck in their ways” with their thinking but as younger decision makers work their way up in the ranks it is changing.

It’s literally a major city street so it’s hard for me to understand the pushback for change that will make the street more accessible for bikers and pedestrians. I do understand that there are a lot of loopholes that deal with state regulations and such but dang can something change before 2800.

Unless the city agrees to assume all engineering, ROW, construction, and maintenance costs (it’s not going to happen because the city has to worry about their own streets) it’s an uphill battle. The state roads primary focus is to move freight and vehicles as quickly as possible from city to city which is understandable since that’s literally the state routes job.
But, my hope is, maybe the city could buy a 12’ strip of ROW on the side of the road and put in a cycle track. Thankfully, until you get past ST Mary’s, there’s not many houses right on Glenwood so you wouldn’t face much pushback for ROW purchase.

South of St Mary’s that’s where we get a little dicey. We have sidewalks on both sides, but the yards are already pretty tight so there might be resistance. We have the TWLT lane which I don’t think residents would want removed since it really helps with left turns safety wise.

If it’s any consolation, we do have the greenway that isn’t too far off Glenwood. If we could somehow tie that into Five Points while still at the very least extending the sidewalks all the way. Not perfect but we can figure something out.

Hey Raleigh bike advocates, we (the MLB Raleigh crew) saw a big market for the model of designing/selling civic merch and using profits to help fund under-funded non-profits. We decided to set up a project that does what MLB Raleigh does, but for things outside of baseball.

Oaks & Spokes (Nick Neptune and fellow DTRaleigh contributor @RaleighBikeLady) reached out while this was still in the “that might be a cool idea” phase and wanted to be the pilot group.

So this week we launched 919Collective.com and are selling shirts designed for Oak&Spokes, with most of the profits going back to them to help fund their cause and grow their influence.

We’re already low on stock but wanted to introduce the idea on here and point those of you who support O&S to this initiative. We’ll also be helping them out with a couple of events and their membership drive which is coming up. (we’ll be introducing other non-profit partners in the future) 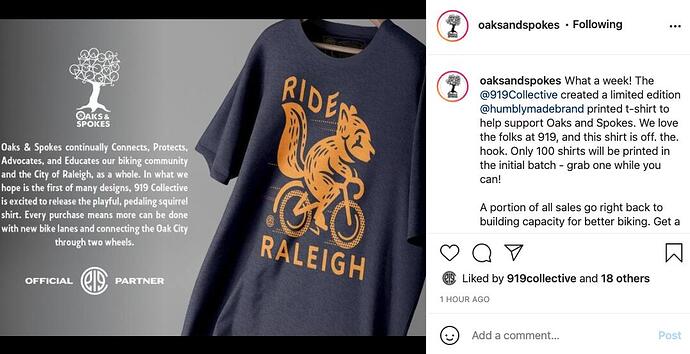 Damn we need a squirrel emoji!

Thank you so much for the partnership, Lou! Love seeing online conversations move to in-person collaborations! Have met many folks off this forum now in real life, and look forward to connecting with more of y’all over time!

Is this offered as a cycling Jersey? Would love one.

Good idea, but not at this time. Sorry!

Wasn’t sure where else to put this (sorry Leo), but there appears to be a virtual open house that just opened up for phase two of the Blount-Person two-way conversion. Video presentation is included. Not too far into it yet, but it looks like they’re only planning to convert to two-way north of Edenton… for now. 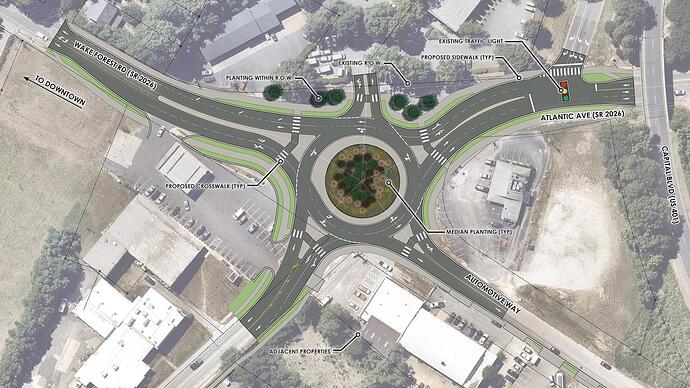 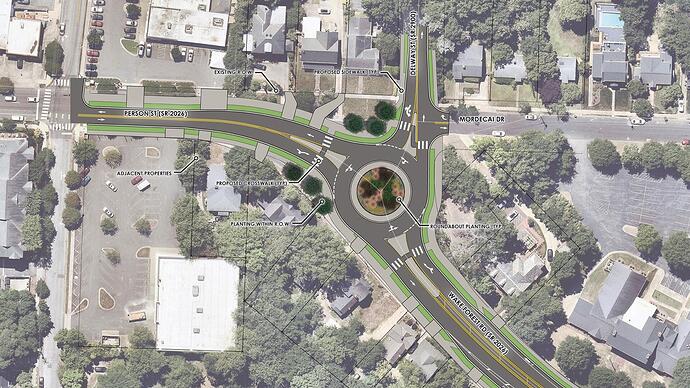 Lets hope in 7-9 years when theses are finally built, people will have learned how to navigate a two lane round-about. I’m not holding my breath considering the one at Hillsborough and Pullen made it less than a year before being converted back to 1 lane.

I am SUPER PUMPED about the high prioritized new trail connections, seen below in pink/purple stripe. Particularly, the new trails DT E-W and N-S, and especially for my hood the proposed trail on Lake Wheeler Rd. South of the existing greenway over the beltline. 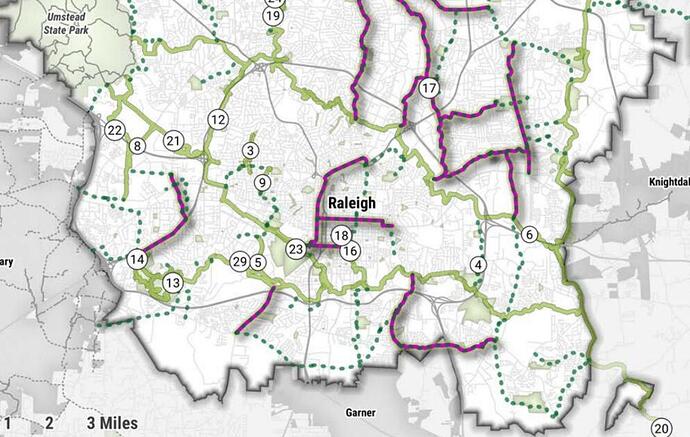 It looks like bike lanes will be coming to the Atlantic Ave bridge on or before Oct 15th. 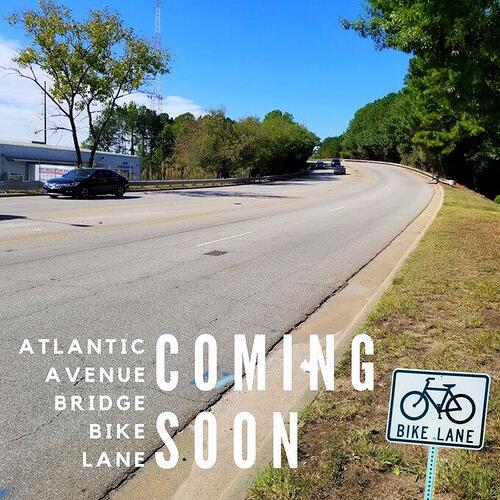 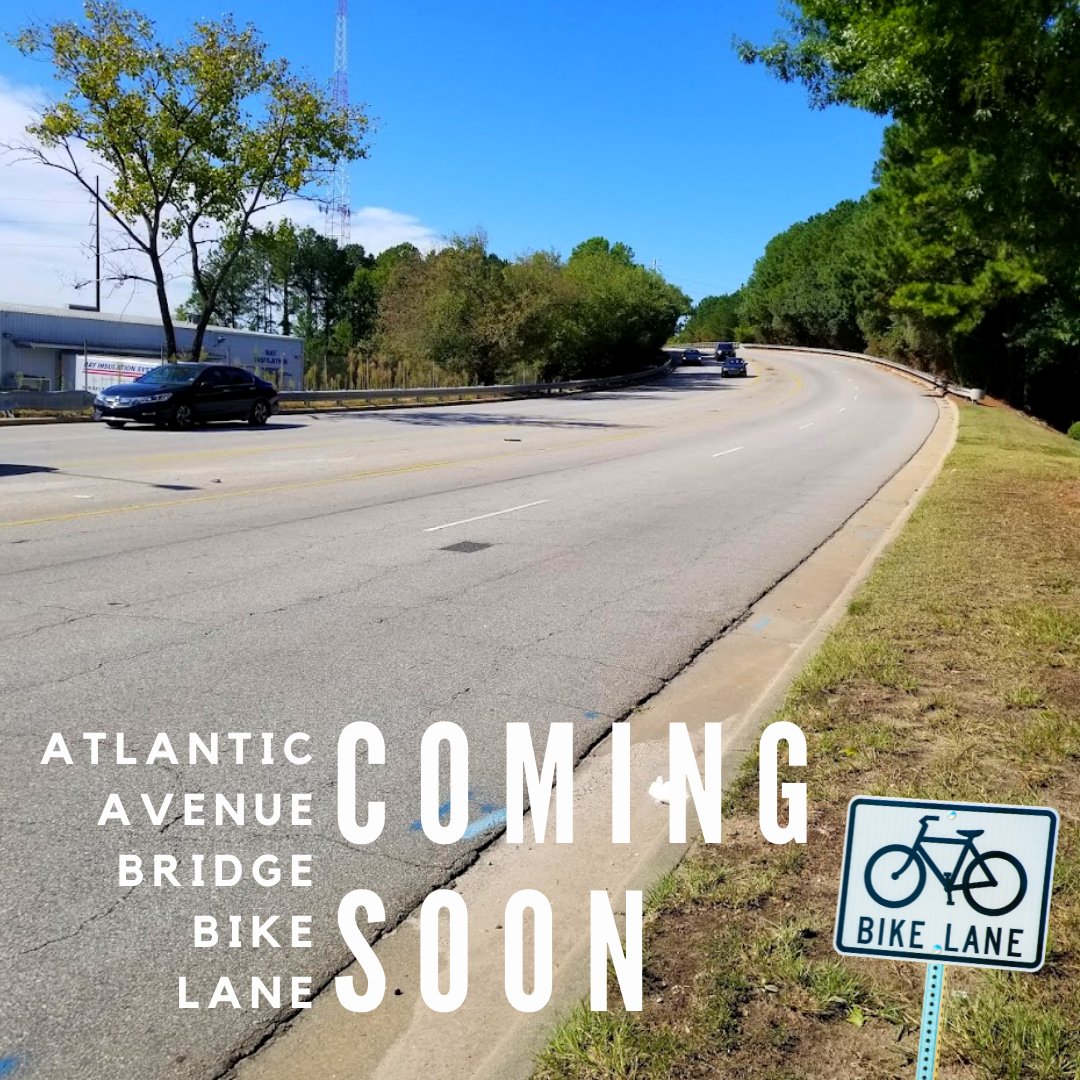 ANNOUNCEMENT! We followed up with @RaleighTranspo and got word that the new bike lanes over the Atlantic Avenue Bridge will be happening on or before October 15th (soon!). Get ready to roll down to At-lan-tic Avenue. 😍

I have a bad feeling this will be one of those budget bike lane additions, where 2 car lanes are stripped from the asphalt, left unfinished with new painted lanes. I want bike lanes on every street in the city, I just wish we could be more realistic when creating them and not always subtracting a car travel lane.

I think these lanes are quite wide and can be narrowed to 11’ and maintained.

Edit: Yup, looks like the outside lanes are about 15’. Should be able to stripe for a bike lane and leave the two travel lanes. I think more study / notice would have had to have taken place if they were removing a travel lane.

They are repaving the street on Atlantic, which is when they will be adding in the new lanes. Should be very nice (smooth!) new surface once they are in.

Also wanted to share that Planning Commission approved text change TC-3-21 today (with a vote of 6-3). This will now move forward to council.

Just the bridge but Loading Dock should have onsite road improvements that will connect up toward the greenway. I will review their site plan again to see what is coming online with that project.

all the lanes will actually be staying but just being narrowed to 11’ (which isn’t really ideal from a bike standpoint to have unprotected lanes there but at least it’s better than nothing). It will be from the Capital ramps to Whitaker Mill Road last time I saw

I’m glad my assumptions were wrong, that will be nice!

I was afraid after I saw Brentwood Rd. off Capital and N. Raleigh Blvd. just got this budget lane stripping and repainting work done recently.

On Saturday I almost saw a serious accident where a bike was in the new lane and a vehicle thinking the second lane is still there went to pass and clipped the bikes handlebars sending him into the curb.