Yes it does actually, make the stadium less viable, and it does have something to do with the money if MLS wants an expansion again and he wants in he might have to pay a billion I’m starting to believe that. Quite honestly with one team it just wouldn’t make sense this whole thing didn’t make sense without MLS. I’m more focused on Ml B which I have a great feeling will come to Raleigh. If we’re loud enough to attract some billionaires. with MLS and NWSL there will be no MLS. I think this guy Malik is trying to rob Raleigh and were taking the bait.

And there it is. You realize baseball is about as exciting as watching paint dry? I played for the record. I never played soccer.

Raleigh nor charlotte USA can handle an MLB team. 82 home games? You’d have to combine the cities to make it a viable market.

Nope Money… Raleigh pretty viable on its own. and I think MLS in CLT apparently has 22k deposits probably more. Eastern NC has to completely turn off from MLS for us to get a team cause now the pro-sports landscape looking really narrow for Raleigh.

@UncleJesse You may not like baseball and you may think that baseball is.a long shot for Raleigh, but let’s stick to the facts.

So saying it’s boring is subjective, and the attendance numbers certainly don’t seem to support that notion.

Meanwhile, baseball saw A RECORD $10.7 billion in revenue last year. So baseball is not only alive and well, it’s popular, thriving, and likely expanding.

Also, as far as population goes, if Milwaukee, Kansas City, Pittsburgh, and Cincinnatti can support MLB team’s then the Triangle certainly could. Based on density per square mile, We rank right in the middle of those 4 established markets.

Point is, I know you get real mad about Raleigh missing on MLS, and you don’t want baseball here, but spare people the misinformation, please.

It outdraws every pro-sport in per-game attendance, except the NFL.

This surprises me. Are these ticket sales and not actual attendance numbers or is that even a possible metric to get?

That’s a good question. But whether it’s ticket sales or actual gate numbers, it’s wayyy more than any other sport on an annual basis, simply because of the shear number of home games (81). Which, IMO, is another reason any public money spent on a sports stadium would be best spent on baseball because the building is guaranteed a minimum of 81 “activations” per year—before you add in concerts, tournaments, etc. etc.

So, Major League Baseball for the win!

When this team starts up in the Triangle, it’ll be the only one between Atlanta and DC.
… serving a region of over 20 million people (rough population of SC, NC, VA)…

The metric used was ‘attendance’ which is the official number these leagues give. Now, you’re right, it’s not specific on if that is ticket sales or actual bodies through the turnstiles. But as @wmgadd points out, the numbers are so far in MLB’s favor that it really doesn’t matter. Here is the breakdown…

I honestly think this is something no one talks about and it’s a very important stat to realize when the city/county talks about using tourism tax money for investment.

ALL other major pro sports COMBINED only bring an average of about 39k more fans to a home city than an MLB team does. That is CRAZY and a number that should be brought up anytime someone says ‘baseball is dying.’

It also should be brought up with a city that is thinking about dropping HUGE amounts of money on a potential MLS stadium that would bring in 371,841 per season while MLB is talking expansion ( and you’re living in a city that is viable population-wise, growing faster than almost any region in the nation, and sitting in the middle of MLB’s largest east coast dead zone. )

Argue however you want to about this, there is ZERO reason Raleigh’s leaders should not be vocal about wanting an MLB franchise and their willingness to work with MLB front office and potential ownership groups to make it a reality.

I don’t think attendance will be an issue at all for this area. If they put it in the right division, there are enough MLB allegiances to other teams here that the home games will be huge draws. My worry is ticket sales for most teams are becoming less of a revenue stream, and they are more dependent on tv revenues and corporate sponsorships. Do we have large enough of a media market to make it a successful team, which in turn drives long term big attendance and better sponsorships / tv contracts.

Personally, I feel like we have a large enough media market but idk

Here are last year’s numbers. You can read the whole piece on media market here ( The Data – MLB Raleigh )… 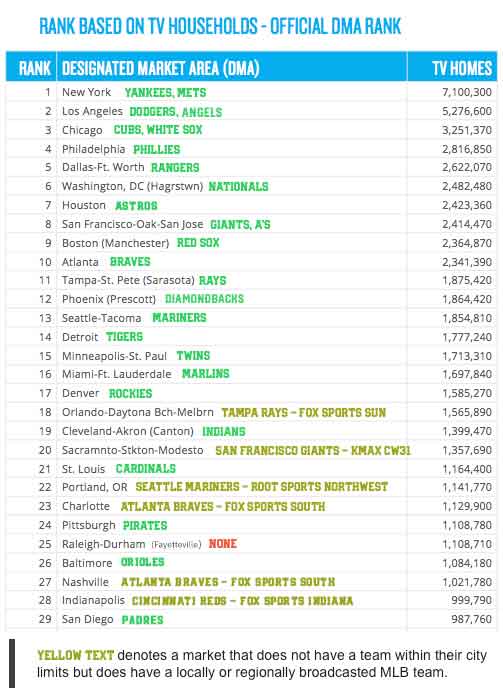 But our market is THE largest in the nation without a locally or regionally broadcasted MLB team. Braves only extend to Greensboro and Baltimore/Nats share rights but are blacked out. This is the biggest dead zone on the east coast for MLB. With our proposed growth, by the time a team start playing (5 to 7 years) we should be approaching mid-sized market numbers.

Of the listed potential expansion teams, Nashville is below us by a bit, Portland is above us by a bit, Montreal is way above us (but not listed on US lists), and Vegas is way below us. So we’re pretty much lumped right in with the cities MLB is currently looking at.

This is disturbing, I’m going to screenshot this and send it to Tim Sweeney Epic Games/Fortnite founder and CEO, and try getting Dundon on this too. Raleigh MLB is the spot and while there not looking at us we need a team.

I am baffled by the numbers that they use in this ranking. Wake County alone has more people than they are attributed to Raleigh-Durham and Fayetteville.
Similarly, Miami-Ft. Lauderdale has more than a million less people than just MiamiDade County alone.

It’s TV homes and not population.

I didn’t see the TV homes label. This makes sense then as it’s based on number of households. It should be lower than actual population. New York metro has about 20M in population but they list 7M tv homes

I’m gonna go ahead and mute this thread. Someone DM me if they ever build a soccer stadium.