Today’s TBJ has a article stating that Penmarc is the location for Mr. Malik’s proposed soccer stadium .

It’s the most sensible area but I would have preferred the Cargill site as it would have had the best city view and rail connection but something else could go there in the future.

I’m disappointed it’s not closer to downtown proper. Walk-ability isn’t that strong from the core of downtown to Penmarc but perhaps there will be focused transportation options.

One thing that may be flying under the radar about this location is that it’s on the Greenway. This certainly isn’t the most direct path, but with bikeshare, one wheels, e-scooters, and private bikes being increasingly prevalent, you could get from downtown to penmarc in 10-15 mins via Rocky Branch Trail > Fayetteville St > Walnut Creek trail. Google maps picks it up as 11 mins by bike from Boulted bread. The tunnel under Dawson/McDowell is the ticket.

There would need to be some work done on those tunnels (not a difficult task I’m sure) to make them a bit more weather resistant. Unless something has changed recently, they become nearly impassable by foot or bike after a good rain as they get very muddy. Also, unless you’re using a ride share option, and those systems will have their limits en-mass, there needs to be some kind of creative solution for storage. I’d love to ride my OneWheel down to a game, but then what do I do with my OneWheel? I’ll take it to a bar/restaurant and set it under my chair, or at the bar. That’s pretty straightforward. But I doubt if I were to take it to a game that they’d let me take it in. I’m not asking the stadium to accommodate for my specific use case, but maybe adoption of personal electric transportation could be considered for storage/lock cubbies/something for people that own vs ride share.

Penmarc it is! With the Five Horizons project to the North and this project anchoring south Saunders, Raleigh will finally have the opportunity to emphasize a true Southern gateway into downtown. I cannot tell you the amount of times I have brought in sales clients down 40, from the airport, only to see their faces as I exit onto Saunders. First impressions matter. Bravo

Today’s TBJ has a article stating that Penmarc is the location for Mr. Malik’s proposed soccer stadium .

“Well, that’s a surprise!”…says nobody in this dtr community.

I think these are the parcels. This may have been covered in the TBJ article 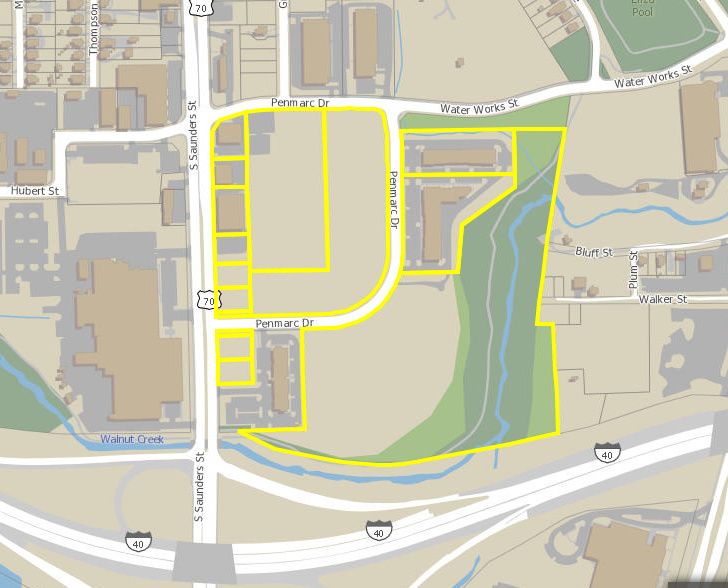 To put it into perspective, it’s about a 28 min, 1.4 mile walk from City Plaza. That’s the equivalent of City Plaza to MoJoe’s. 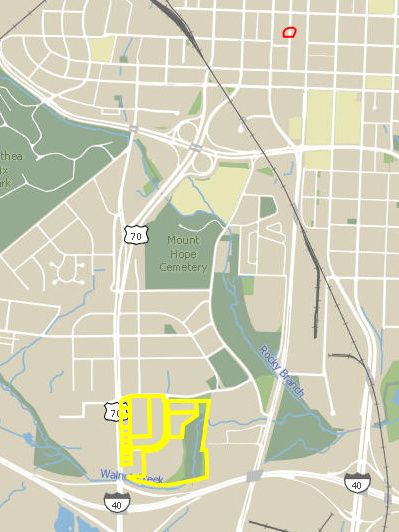 This is about 0.4 mile farther than the original proposed spot on Peace. I like this area a lot better for a project like this, though. I hope they make good use of the stream (Walnut Creek) that runs through there.

Here is a random thought. Is there any good way to combine a soccer stadium inside a baseball park? I know NFL and MLB used to share stadiums. But seemed like they always used the baseball infield as part of the football field. Which I think is wierd. I haven’t run the number, but I would think the outfield would be big enough.

Not sure it’s a feasible plan. But it needs to be brought up and looked into as MLB May be next in line for a tax money handout. Right after we shell out for a MLS stadium.

Or a 5 minute Bird scooter ride… Oh wait. Our city is scared of people on scooters. Also, there’ll be parking…

This is about 0.4 mile farther than the original proposed spot on Peace. I like this area a lot better for a project like this, though. I hope they make good use of the stream (Walnut Creek) that runs through there.

It’s not just the distance that counts, it’s the experience of that distance. While I think that the developers will be able to create something engaging here that will spill over to its east and west, the bigger challenge will be to find a good way to connect it to core of the city. This site has several challenges to that end:

Rocky Branch currently acts as a barrier.
Single family home/suburban development neighborhoods disrupt the urban fabric
Mount Hope Cemetery is smack dab in the middle of the area between this site and DT proper
S. Saunders is a wide suburban boulevard that needs to be tamed

I do like this location though for other reasons, and I think that the best way to connect it to the DT core is to jump S. Saunders and connect it to development that occurs on the west side of the street all the way into Heritage Park. Certainly there are barriers there as well with single family homes, etc., but there’s also existing commercial development along Maywood and solid plans to urbanize along the corridor. This project, if it can jump S. Saunders, could end up tying it to Dix Park and the DT core.

Here is a random thought. Is there any good way to combine a soccer stadium inside a baseball park? I know NFL and MLB used to share stadiums. But seemed like they always used the baseball infield as part of the football field. Which I think is wierd. I haven’t run the number, but I would think the outfield would be big enough.

This is a point worth discussing.

I’d say that if MLS was knocking down the door to come to Raleigh, then you just go ahead and build a soccer specific stadium here.

However, with Raleigh almost surely not getting a franchise during this round of expansion and no shoe-in to get one on the next round, building a permanent ‘soccer’ stadium here just to house NCFC and the Courage seems like very hasty move and one that could end up eliminating some interesting options.

The MLB movement is likely to continue to pick up steam, especially as expansion gets closer. As MLB and MLS hang in the balance, you’d like to have some sort of flexibility in this location. It will come down to timing and risk assessment on Kane’s part, but just note that MLS has played in MLB Ballparks, but obviously no MLB team could ever play in a soccer stadium bc of dimensions.

At this point it seems as if the next round of MLS expansion could be happening the same time MLB expansion is happening. This could be an opportunity to build one stadium that houses 2 pro teams, and the fact that the stadium would be being built new, it could be designed specifically for this scenario.

Like I said, it’s all about timing with expansion, however, building out a permanent stadium without an MLS team, that only houses minor-league soccer, would be eliminating a lot of flexibility and take a lot of options off the table should both sports come knocking in the coming years.

No matter how you slice it South Saunders is a big, busy, ugly car sewer.

How can this be mitigated?

To add another crazy idea for mitigating the S. Saunders car sewer:

It’s funny how your suggestion is in the stadium discussion thread. I would say one of the biggest reasons the Penmarc site was chosen is its proximity and ease of access to I-40. Not to mention the S.Saunders interchange was recently redone.

The streetscape on S. Saunders isnt really all that bad. I would suggest that we should

Counterpoint. Do the road diet on South Saunders, and then add an interchange at South Wilmington to spread the traffic around. You’d need some wicked ramp braiding to make it work, but I do think it would be possible.

To add another crazy idea for mitigating the S. Saunders car sewer:

No matter how you slice it South Saunders is a big, busy, ugly car sewer.

There’s two parts to this equation. One is the development on the road, and the other is the road itself. Combined, it’s just a mess. It’s not until you get to the money shot “hill” that it’s decent. Then again, it’s only decent because there’s just trees to look at by that point.
The Penmarc project will go a long way to start curing the built environment along the corridor, and that will hopefully spawn more uplifting development in the corridor. As for the road itself, it should be considered the sister road to the renovations going on @ inbound Capital Blvd. A streetscape plan should be implemented, planted medians installed, and speed limits should be lowered from 45 to 35. Lowered limits will allow for lanes to go on a diet that’s appropriate for the lower speed. In other words, design the road for the experiences that you want to see along that corridor.
In the a more perfect World, Penmarc would have been the location of Mt. Hope Cemetery and the cemetery property would be developed with a soccer stadium and mixed use. oh well…