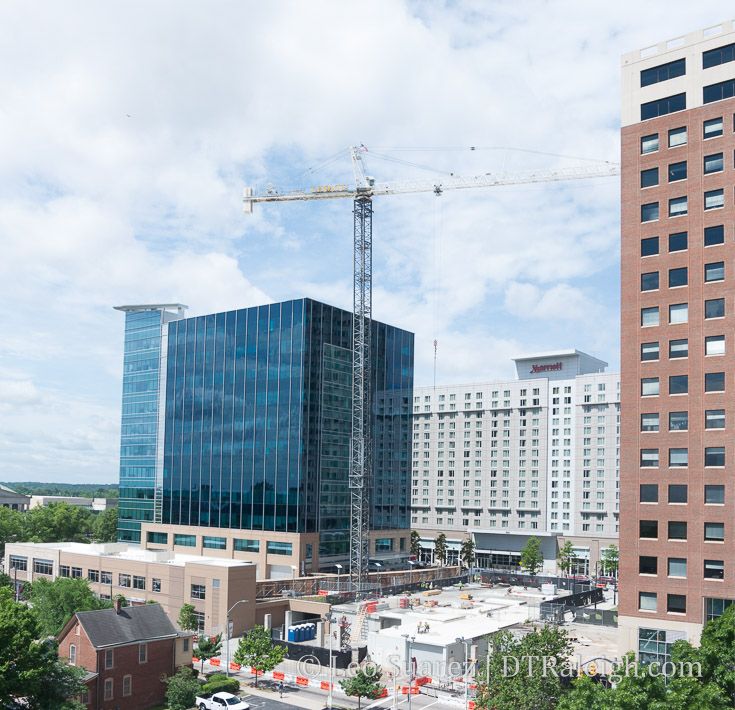 It is nice to see Construction booming in Downtown…But I’m trying to figure out why such height restrictions, why stop at only 20 stories tall ? Would be nice to see at least two or three more high rise buildings taller than 20. Raleigh is not Charlotte I get it…But for the Triangle to truly Boom, you have to build taller to accommodate the need for hotel/office space. 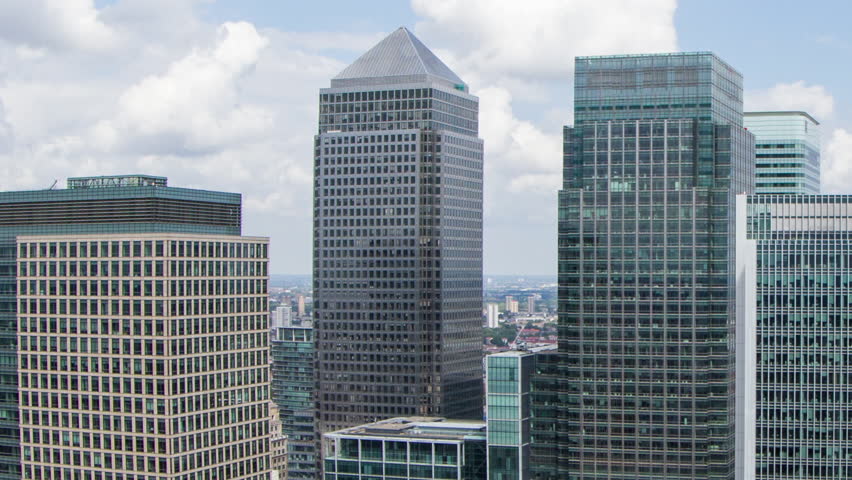 It’s going to be 22 or 23 stories because that is all what the parking deck underground can hold.

Lots of concrete and rebar! 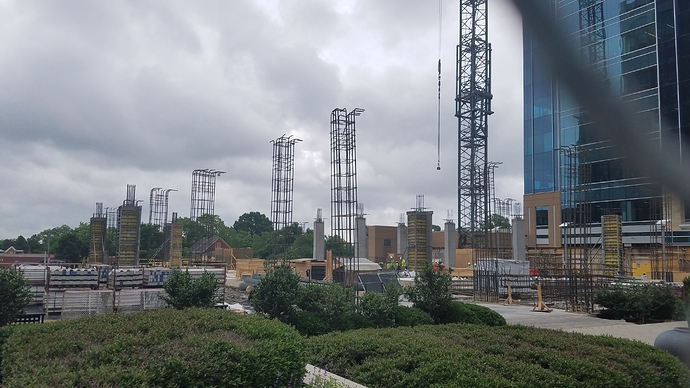 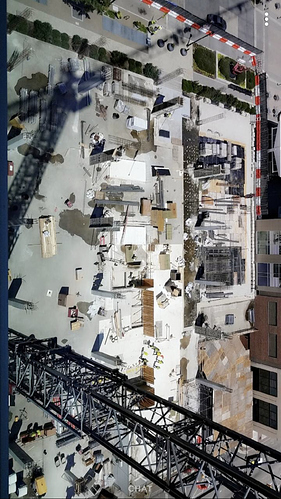 I have a friend who works in the building next door. This is their view of the construction.

It’s great to see this building finally going up after so many years. I’m particularly excited about the residential component, as the current City Plaza is pretty inactive at most times. Hopefully the new residents will add some needed vitality to the area.

what are the zoned height restrictions downtown?
Paris has great density with a bunch of 5 story buildings. Tall buildings won’t save us, we have to start spreading density out from the core if we’re going to have a financially viable city in the future.

Dwight, the Paris restrictions are only for the historic core due to the unpopular Tower Montparnasse in the middle of Paris. All the 35+ story towers were therefore developed in La Defense area nearby.

And if you’ve noticed, the same thing is happening to Arlington/Alexandria/Bethesda etc. around DC. Density in the central core is almost always a good thing!

good point. I’m just saying density is possible without towers.
And the towers we get in Raleigh seem to be mostly office space, which doesn’t help housing availability or many of the other issues density is supposed to help with. I’d rather see dozens of small and mid size developers helping to build Raleigh than see a few outsize entities dominate the scene.

I’m a big advocate of redeveloping East Downtown Raleigh from a sleepy single family unit area to multi-story area from East St to Tarboro St. Whatever history East Downtown Raleigh had is long gone. It’s just rich programmers and techies pricing out everyone else at the moment, anyone notice all the for-rent signs in East DTR? Yeah those are the landlords kicking out all the previous renters to raise the rent prices and rent to high income earners.

Either way the city has to decide to make at least one of their neighboring areas a high density area. There’s no choice unless people want to have unaffordable housing.

Do we want that? To make people unable to afford housing because there’s no housing options left leaving only those with money to afford the very little housing stock available? When Raleigh was only 150,000 people it was okay for the city to be surrounded by single family areas. We’re at 600,000 now and in just two decades will be sitting at 1,200,000.

Can’t help but provide more updates from different angles. (I work close by 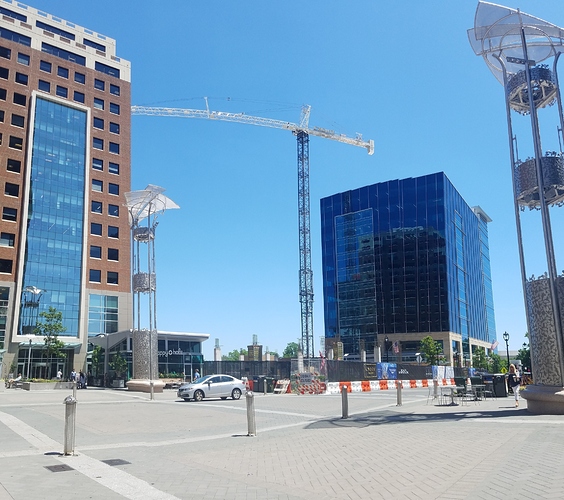 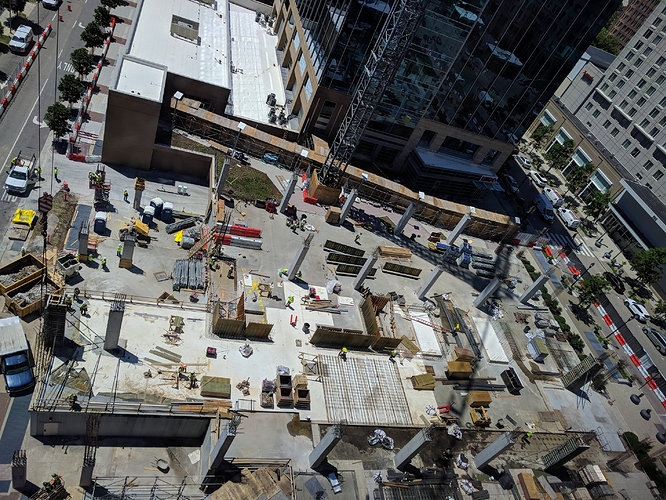 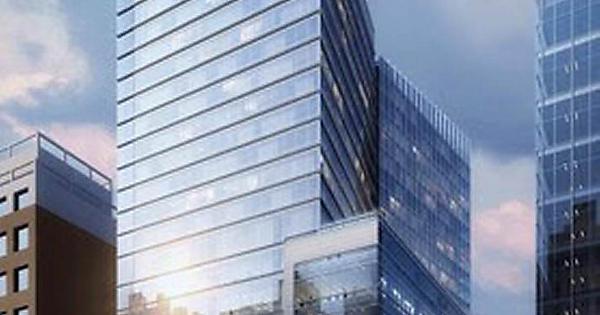 Wait, I’m not exactly sure if this is right… if this is the case, then the opposite (which I’m assuming you’re for) must be true, which would be that if more development happens, then people earning less* will want to stay on their current property. As much as it would be nice to have new housing options in the east, I can’t help but feel as if people who live there will be all but kicked out ]no matter what… whether it’s by being priced out with skyrocketing land values or by developers. It looks more as if none of that matters; all that needs to be there is the prospect or the idea of development, and people who earn less will get driven out.

It looks like the people who live between East and Tarboro streets apparently have an annual median income of $22k per household. Combined with other census and zoning data, I’m having a hard time imagining that they’d be the kind of people who have the will or means to put up a fight if it comes down to it, too…

Disclaimer: I’ve never personally been east of Moore Square before -but only because I’ve personally never had the chance or reason to. But with that said, dat census data don’t lie

No, old property is low density–you can’t have your pie and eat it too. The hard truth is if a person wants to live in East Raleigh affordability then most low density property will have give way to high density development–but this will only work if there’s enough supply to meet everyone’s demand for housing.

If we want housing costs to stabilize and be affordable we will have to transform the city much like how Barcelona did in the late 1800’s but using modern planning. 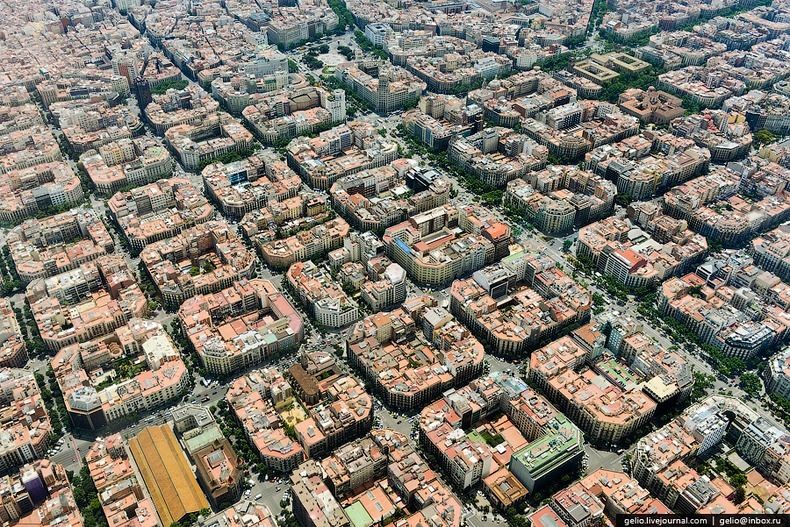 You know like space for parks. Barcelona has world class parks but super block neighborhoods are a green space dead zone.

The view from Wilmington street may be the most dramatic. 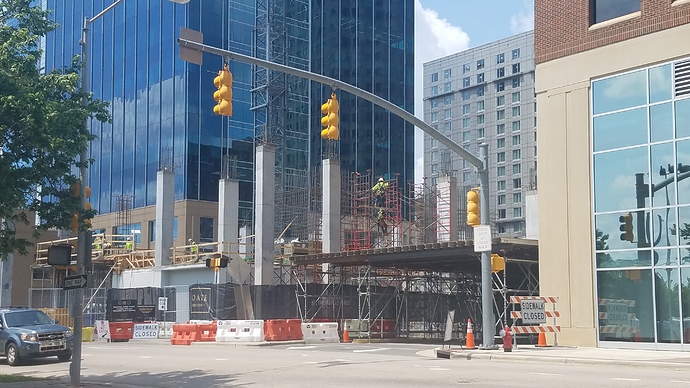