Blue Ridge Realty has now acquired a contiguous block of real estate along Glenwood Avenue as shown on this map.

The area is zoned for 7 stories, and although no rezoning plans have been submitted, the word on the street is that Blue Ridge wants to build a 12-story mixed use building.

Perhaps this means the Cornerstone Bar will never re-open. 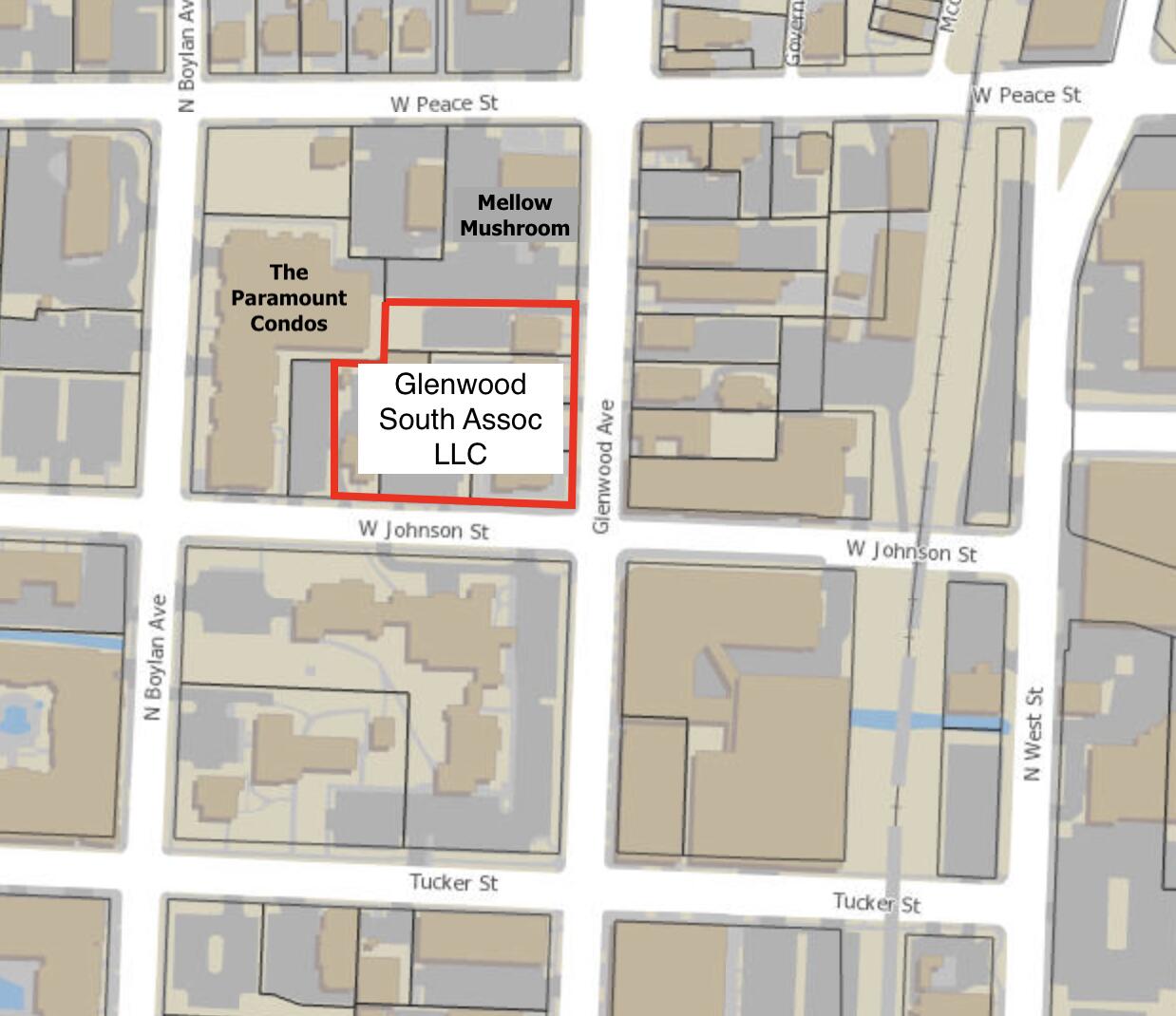 4 more original, glenwood area homes gone. Cornerstone alreayd sort of destroyed 3 of these but the florist is still in great shape and hope is moved. One of these was Avery Upchurch’s boyhood home.

I never heard of Meillow Mushroom. Is that some kind of German restaurant?

Wow 12 stories with some office space in there will be really cool.

Sounds more Californian to me.

But really a pizza place that sales ok pizza.

I like to rip on Cornerstone, but there’s no arguing it’s a major attraction. We shouldn’t be demolishing what makes Glenwood a desirable place to be. This almost happened to Rainey Street in Austin.

Praise heavens. The Cornerstone devolved into a cesspool over the years.

I think that Smoky Hollow is just the beginning of a massive change to the northern blocks of Glenwood South. I wouldn’t get too attached to any of the small businesses on that stretch. I’ll bet that even a huge operation like the Raleigh Beer Garden could see its days numbered for the value of the land alone.
Frankly, if I had to pick an order for the lots to be redeveloped, I’d choose Alchemy to be affected first. I’d love to see that cheesy place go!
Wow. Just read some reviews on Alchemy and the first two were by women who had their phones stolen there.

Hampton Inn would probably love to see Alchemy gone too since I’ve heard they end up having to comp rooms facing that direction fairly often. I wish Glenwood was an actual active retail strip and not just full of places only busy from midnight -2am Thursday-Saturday. It acted like it was gonna be a nice mixed use area in the late 90’s then went full club scene pretty quickly once Rocky Top showed up.

I’ve been through this pattern before and the next wave is certainly coming where the party scene gets replaced by more retail and restaurant. Not all of the party scene will leave, but it will become more balanced and “sophisticated”. The density of residents will enable businesses to stay active 7 days a week, and that will eventually change the use of the land to a model that is generating revenue every day of the week. Think more Hibernian and less Alchemy. Think more neighborhood bar and less weekend nightclub.

It’s somewhat Ironic that Glenwood South is the undisputed leader in residential density in downtown, but residents work somewhere else and leave during the daytime. And the historic lack of any large government and office buildings as compared to the rest of downtown robbed the area of daytime foot traffic needed to establish any significant retail, so small scale bars and restaurants filled the gap. The arrival of One Glenwood, Block 83 and the office buildings of Smokey Hollow has changed that, so I agree with @John that the transformation is coming.

I hope both you and @John are correct. And you seem like pretty smart guys so I bet you will be.

I’m hoping @R-Dub is right about how smart you guys are.

Well I think you are pretty smart too so I hope you are right too.

And let’s me at least watch

It did happen to Rainey St in Austin. They destroyed it.

Unrelated thought, but, why did Glenwood South become the nightlife district while Hillsborough has turned into a (mostly failed) upscale restaurant row? That’s where the nightlife should have gone, with nightlife ticket underwriting cheapo lunch places, so it actually, I don’t know, catered to the people who are nearby? Instead of constantly turning over over-priced tone-deaf restaurants in spaces owned by landlords who think their property is somewhere other than right across the street from a state university. The market rarely makes as much sense as everybody tells me it does.