Kane keeps building like crazy in NH. I don’t think this has to take anything away from downtown. But I would like to see more connectivity between the two. I can envision a high density mix used corridor from downtown all the way to midtown in the future if some key items are addressed. (I think this was along the lines o what Kane was pitching for the downtown Amazon corridor).

Downtown heading north, after peace street along capital - and then up through WF rd. This corridor is severely dated and run down and needs revamping all the way around. The Capital rd project will help some. And I think there is a planned greenspace along Pigeon Branch.

I would like to see WF rd street scaping from about Krispy kream, all the way to to Costco and Duke Raleigh Hospital. Make it more pedestrian and and bicycle friendly - connect WF rd to WF rd where Capital passes across it. There is a lot of ripe land in this area with mostly warehouses or generally run down property that could be developed.

Have to say “Park at North Hills” looks more downtownie and friendly than most of downtown.

Would have been nice if the proposed pedestrian bridge/tunnel (do not recall which) over to North Hills had been built.

Really need to get a new camera. All these misty shots. Haha

Regardless of what they’ve done at Park at North Hills, it’s still fake version of an urban area. It’s almost Disneyesque in its structure and function, plus it’s also inwardly focused & contained that the adjacent neighborhoods are all but ignored.
While the overall North Hills/Midtown redevelopment is certainly better than the strip development that is pervasive across the Triangle, it’s still almost exclusively auto-oriented for those who aren’t residents of the development. Even then, the context of project along a major/busy corridor (Six Forks), makes walking from the east side to the west side uncomfortable at best.
If you look at what Kane is doing in phase 2 (Smokey Hollow), downtown, he’s creating a project that’s stretching and engaging Glenwood South through a pedestrian corridor. He’s also abutting the West Condo project, thus strengthening downtown’s urban credentials.
Between the two, give me downtown every day of the week.

Some people here like to talk about all the new buildings coming up at North Hills, or if you’re like me, you’re looking forward to the Midtown-St. Albans area plan that’ll hopefully make it denser/more walkable, and build better transit connections to DTR.

All of that depends on those land use guidelines being passed, though -and I finally found specific dates for when they will (hopefully!!) be approved:

I think this means the city will start asking for public comments today -but I’ll be working and can’t see the WebEx for this plan, starting today at 4pm

Was anyone else thinking of going?

It’s nice that North Hills is getting more densely developed, and that Midtown Exchange, Five Points/East End Market, and Capital Blvd. are starting to come up with cool-looking concepts. But if you want that vibe to last, then you need to tie all of those projects together into one plan with a single narrative. Only then, can we finally make Raleigh’s inner-north suburbs more walkable and less car-dependent (and be in it for the long run)! 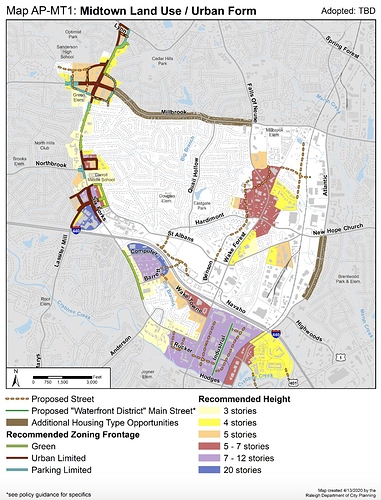 I wonder if this is what John Kane had in mind for the northern end of his mysterious “Prime Corridor” proposal back when we were competing for Amazon HQ2? Maybe it’s not bad, after all, that we didn’t have to bow down to Amazon’s demands to make a plan like this happen.

Well, there’s a lot to unpack in this plan, isn’t there?
I’d love to better understand various parts of these recommendations, and hope that i can carve out the time to attend, but I don’t know yet.
In particular, I’m curious about the stretch of Millbrook that’s listed as additional housing type opportunities. WTH does that practically mean for that stretch of Millbrook that’s SFHs?

Looks like they’re trying to go for denser houses around there (that don’t require rezonings).

Parcels directly along Millbrook Road and Atlantic Avenue are suitable for the development of housing types other than only detached houses. “Missing middle” types such as duplexes, triplexes, fourplexes, and townhouses are appropriate.

Sooo… it looks like the Planning Commission isn’t ready to make a judgment call for the “walkable Midtown” plan on Sept. 28 as originally planned. There’s an agenda item for the City Council meeting on Oct. 6 to request an extension for making a recommendation.

[The Planning] Commission’s Committee of the Whole first took up the item on August 27 and September 24. The Committee heard numerous comments and deferred the item until its October 22 meeting.

To allow for time to continue the review and discussion, the Planning Commission has requested a 60-day time extension. That would allow the Commission until November 27 to report the item to Council.

The “numerous comments” sound like a mix of people worried about building height transitions, parking, and walkability. The Commission was going to play around with options like:

You can find the full list of potential changes from Sept. 24 here. Remember some of the conversation topics may change on Oct. 22, when this plan is back in discussion:

Aren’t they screwing over Kane with the height change from 20 stories to 12 stories at the JC Penney site. Hasn’t he already submitted a proposal for 18 stories here?

Bunch of NIMBYs pushing for this.

Yes. I think you and I see the same discussions on Nextdoor about this. There are some folks in this area drumming up opposition to the 20 story zoning. To be fair, if I lived directly across Lassiter Mill from the JC Penny building, I wouldn’t be fond of a 20 story building directly across the street. But I don’t think that’s the case with most of the people who complain.

Since the SFHs are across the street from that proposed tower, they are better classified as NIMFYs.

I just looked up the JC Penney re-development. It has been approved and the tallest buildings are only 12 stories. So, Kane would not be screwed. I don’t know where I got the 18 story height from. I’ll chalk it up to senility.

It’s not very clear where updates for Midtown Exchange (and Midtown/North Hills projects aside for those with specific threads) should go, so here we are: 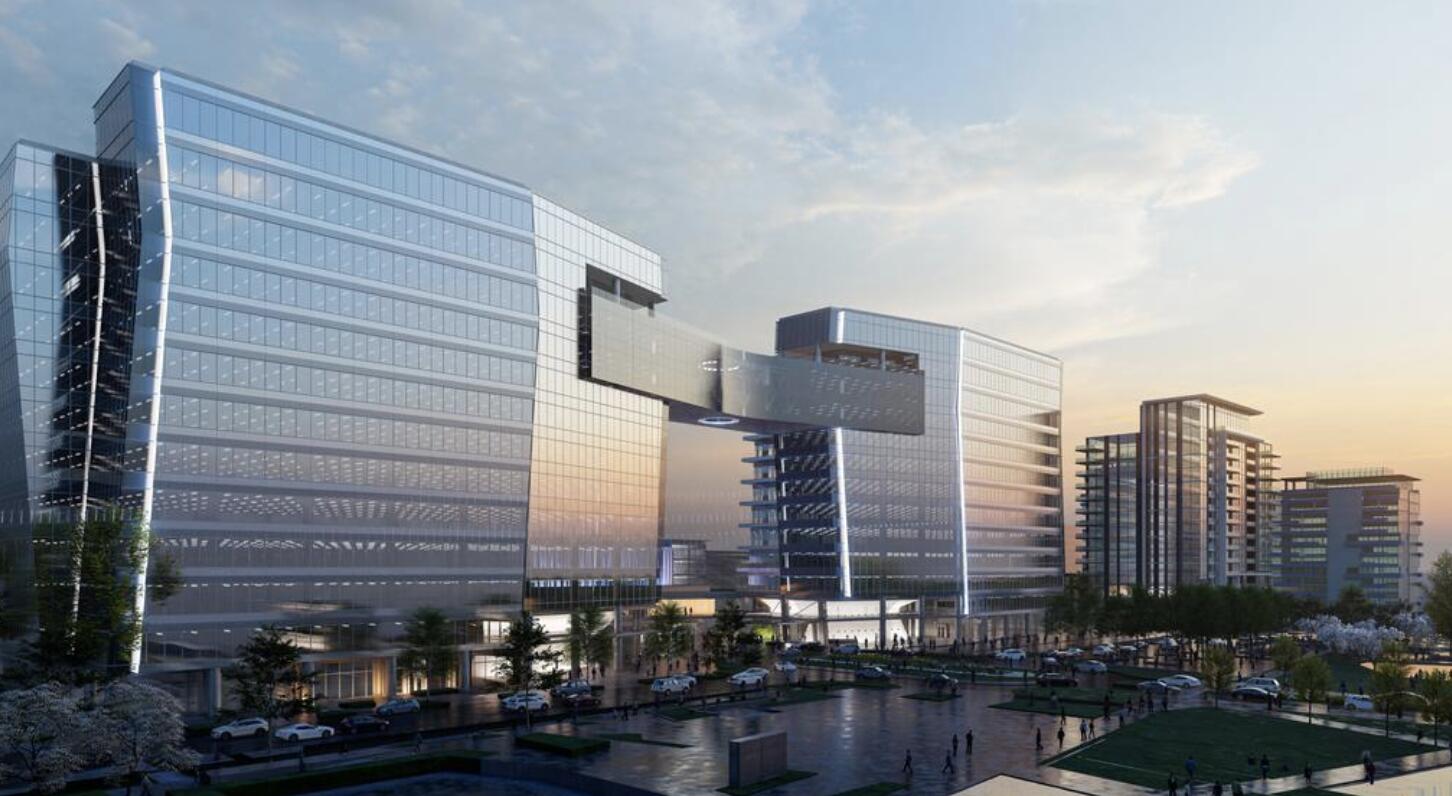 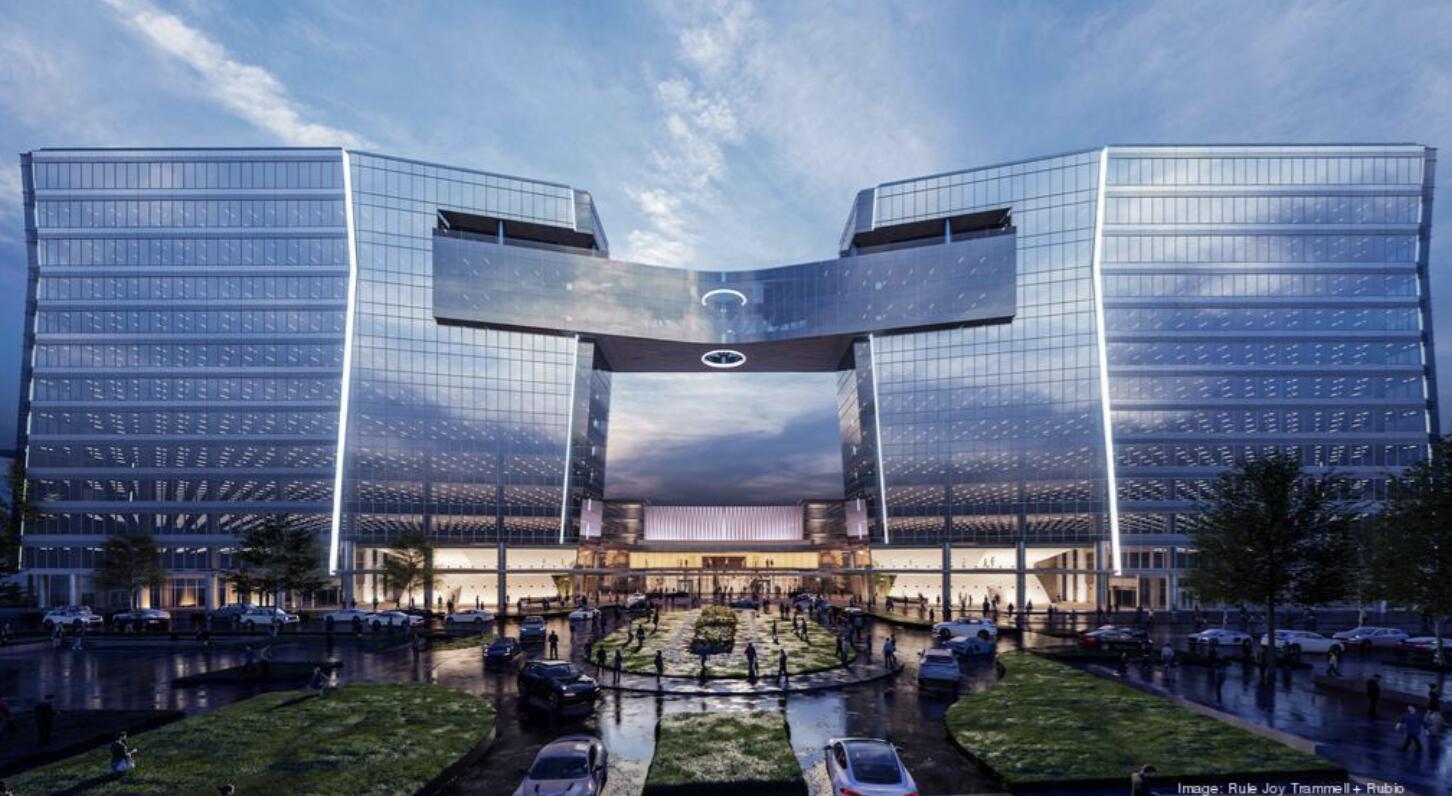 Construction is set to begin in mid-2021. The building will be able to deliver without its sister tower, and Dewitt expects to complete MTX One in late 2022.

[…] MTX One will also feature […] a dedicated parking deck with 3.5 spaces for every 1,000 square feet. The full cost of MTX One has yet to be finalized, according to Dewitt. […] [T]hey have yet to finalize when the second tower will break ground.

[Dewitt] is currently in talks with several potential tenants, though none that can be announced yet […]