The mansions of Blount Street

It’s in a strange zone in between Person St. and Downtown proper, but I suppose this is the best place to put this:

The Andrews-Duncan House renovation at 407 N. Bount is moving along painstakingly - it feels like they’re pulling out every piece of wood and refinishing it individually. Does look like they’ve done a ton of work inside and are adding some sort of second-story addition to the rear. 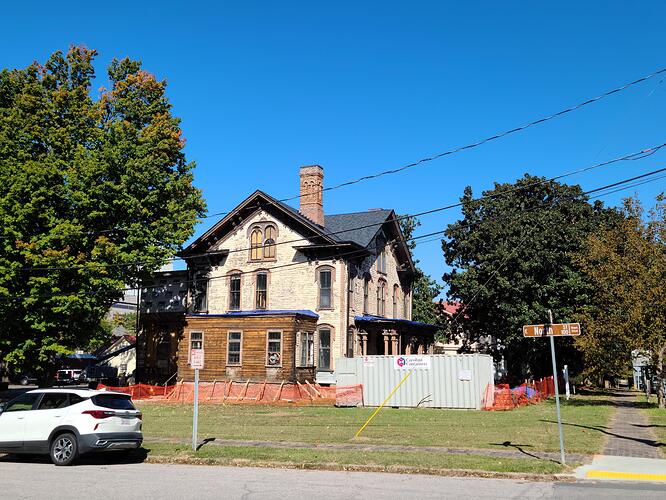 I’d rather have them do it painstakingly slow and correct. Thanks for sharing.

The pink/salmon colored house across North st. was worth every second. It’s immaculate

The Olde Raleigh instagram just posted about the history of that one - sounds like it’s really come back from the brink: https://www.instagram.com/p/CUpj6lhL5e7/

Actually I’ve always thought that Blount between Peace and Jones should be its own thing with beautifully restored homes and new ones built to fill the gaps. It would be a destination on its own.

With that let’s create a thread about this section of town.

We know the owners of this house. To say it’s been a painstaking process is a massive understatement. It’s been nearly a 4 year process just to get started.

With the Andrews-Duncan House well on its way to rehabilitation, the Capehart House at 424 N. Blount is top of my wishlist for a renovation. It’s absolutely unique, with stained glass and that eclectic stone porch.

The Capehart House is a Queen Anne style house built circa 1898 by Charles P. Snuggs for Lucy Catherine Capehart and her second husband, B. A. Capehart. Located on 424 North Blount Street in Raleigh, Wake County, North Carolina, it is one of the best examples of Queen Anne style architecture still standing in Raleigh. The Capehart House has an irregular skyline made of towers, turrets, dormers, and pediments, and luxurious facades ornamented with stained glass and decorative wooden designs.[3 Af...

The State Ethics Commission occupies it now and it’s starting to get quite a bit rundown. Hard to tell in these pictures, but the paint, windows, and detailing are all pretty rough. 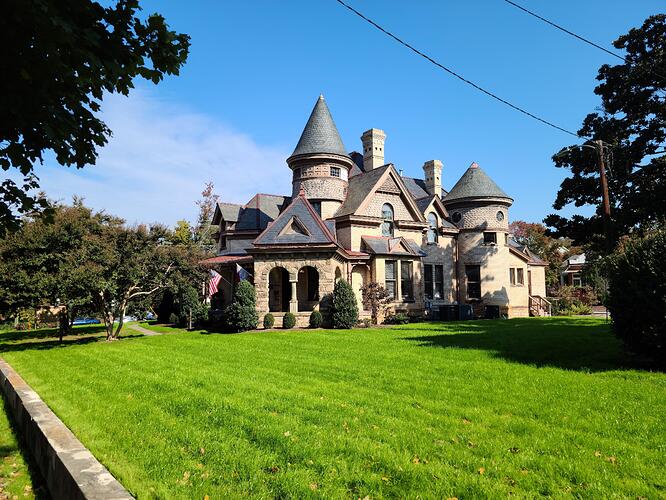 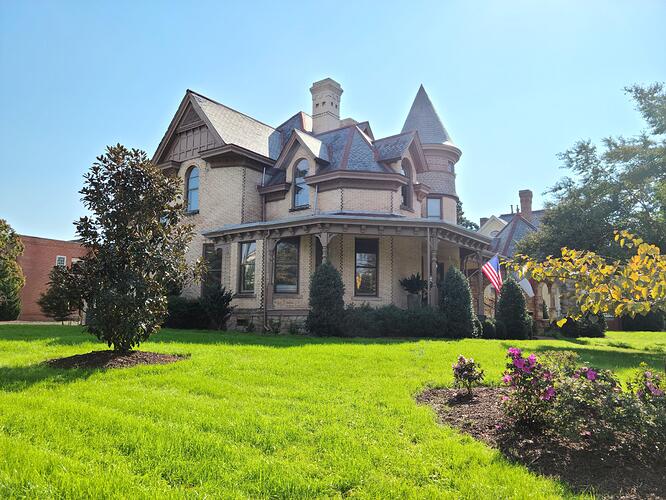 I’ve always loved this house, and this whole stretch of Blount. Let’s keep those fingers crossed that something positive happens here.

Another Blount Street mansion suffering from slow neglect is 302 N. Blount Street, built in 1920 and former (current? hard to tell) home of the local chapter of the United Daughters of the Confederacy. The paint is peeling everywhere and just on the side facing the governor’s mansion, the railing is falling down and one of the upper windows is filled in with broken plywood.

It’s less unique than the Capehart House, but it’s a lovely example of its style. 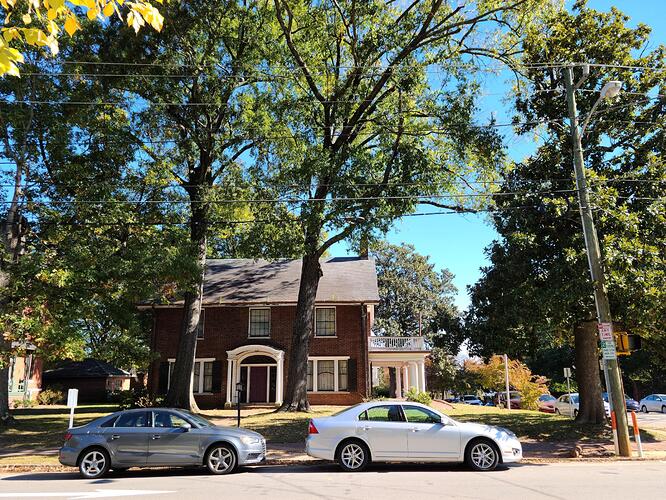 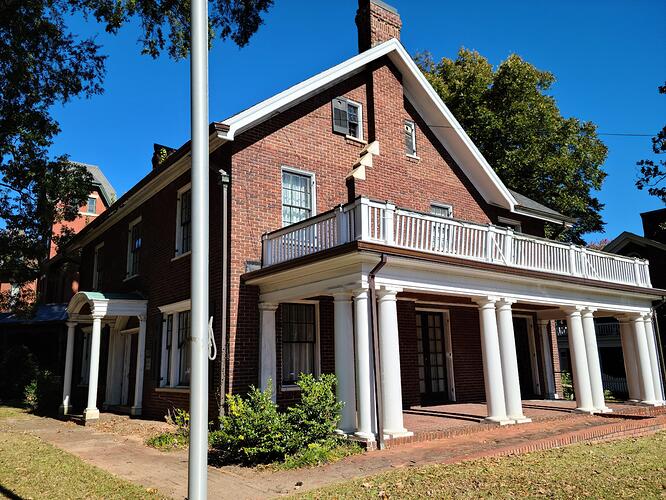 Another one of my frequent renovation wishlist items is 304 E. Jones Street. It’s on Person Street, but since it’s an office in a beautiful old home and right on the fringe of Oakwood I tend to lump it in with the Blount Street mansions.

A law firm operates out of it, and most of it is really well maintained, so nice work there. The issue is the roof - the main roof is some anachronistic metal, and the tower roof is covered with some extremely flimsy-looking faded black plastic. A B- restoration that’s a roofing job away from an A. 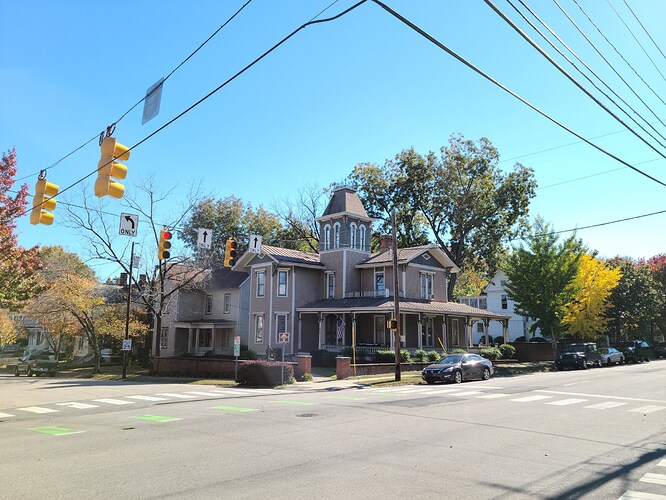 All those roof areas look to be metal. Probably just real thin.

That might make sense. Assumed it was plastic because of how matte colored and wavy the panels are.

I might make this a Friday thing going forward, because I like doing it but it’s not exactly breaking news.

Today I decided to focus on one of the hidden gems of the Blount Street district, 226 E. North Street. The surprising asymmetry from every angle. The dark brick and cream combination. The dramatic double height arched windows on the front. It’s classy yet weird in a way Raleigh rarely is. 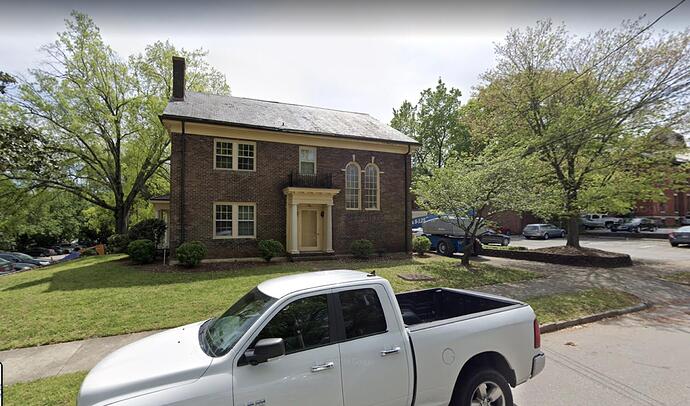 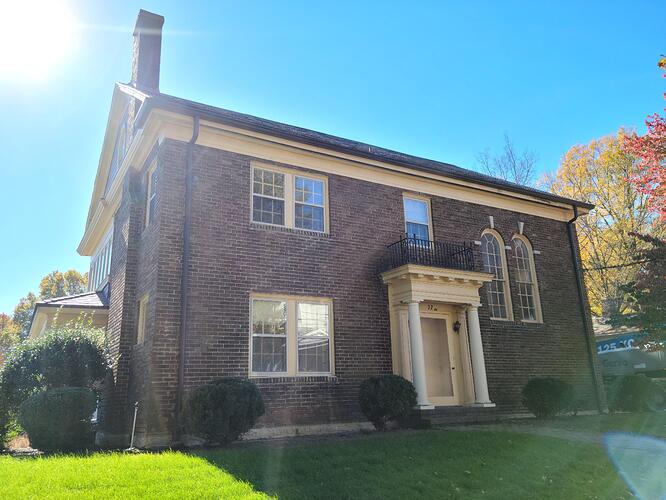 Of course, it wouldn’t be a state owned building if it wasn’t surrounded by surface parking (in which they seem to permanently park some industrial equipment)… 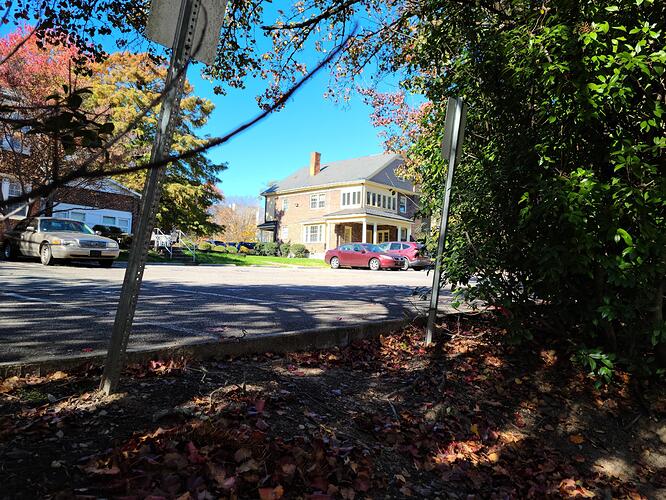 …but there’s a twist! Facing Person Street is some beautiful stonework that clearly belonged to a much more elegant time for the district. 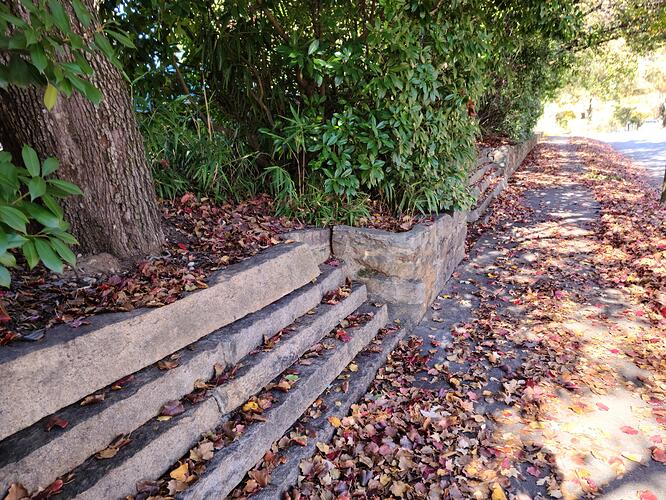 belonged to a much more elegant time

Reminds me of another place and time!

So I walked up to look at the plaques on the door, since I haven’t seen this thing occupied in at least a year and half.

Its name is the Bailey-Gunn House, and the plaque says 1922.
Still seems to “officially” be the division hq of the UDC. Without getting political about it, it’d be nice if they’d sell it on to someone who would fix it up, use it, and take care of it. It’s a lovely house on a prominent location facing the governor’s mansion.

The Friday Spotlight is the Lee House at 422 N. Blount, built in 1901 and home to the NC Occupational Safety and Health Review Commission.

It’s been pretty well kept up by state office building standards, so kudos to the state on that one! Lovely windows and a wonderfully cozy looking porch that doesn’t get used nearly often enough in its current guise. 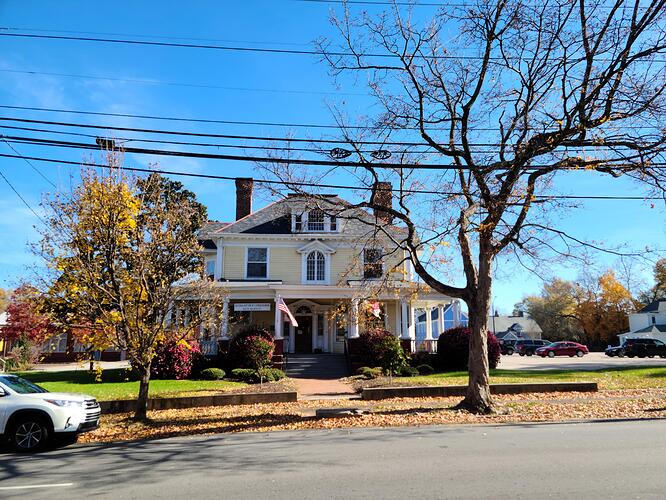 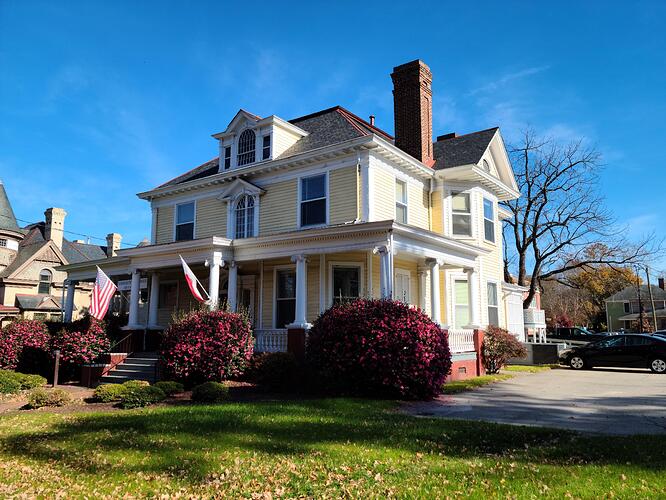 It’s next to the absolutely criminal ocean of surface parking that takes up most of the 400 block of Blount. We’ve gone from something like this (I don’t know which part of Blount that postcard is from): 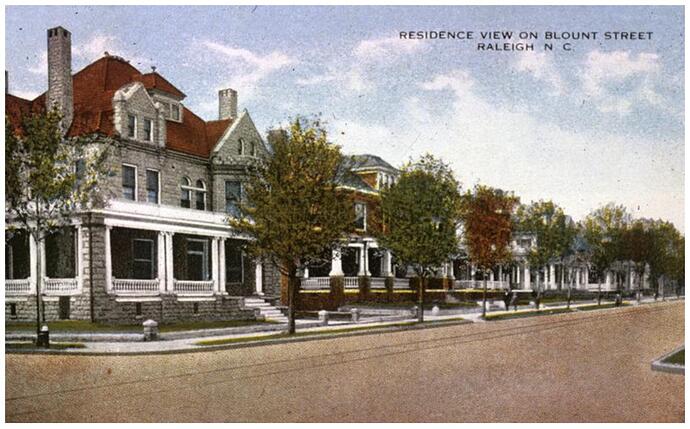 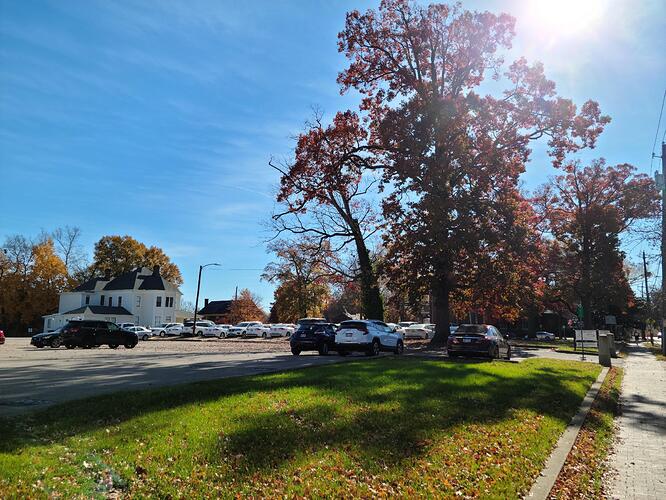 One final post, this plot of land (401 N. Blount) is fascinating. In between the two mega-Victorians on Blount, and backing up on the Clay Oak House, it’s a historians’ dream, but what could you put on that little lot that could stand up to all that architecture around it? 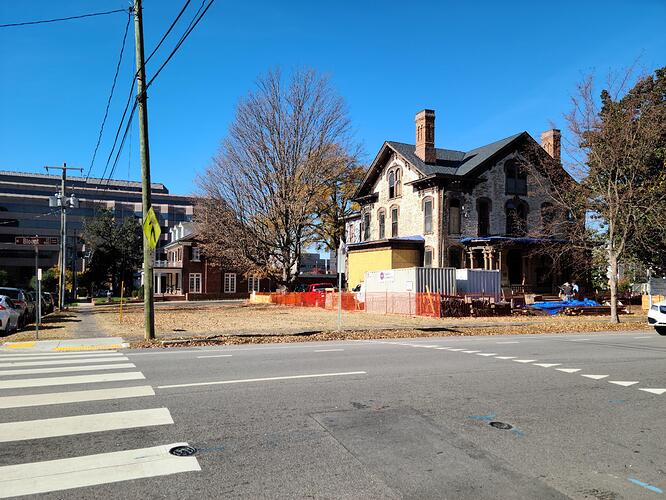 The location of the residences on Blount St. on the old post card was directly across the street from the governor’s mansion where state buildings now sit. I believe they were demolished in the early 60’s.

Well, it’s understandable they demolished them given how valuable land was and how little room there was to grow in 1960s Raleigh 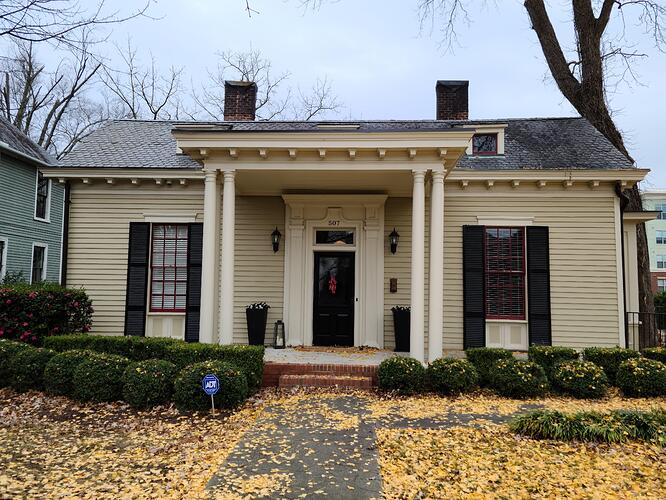 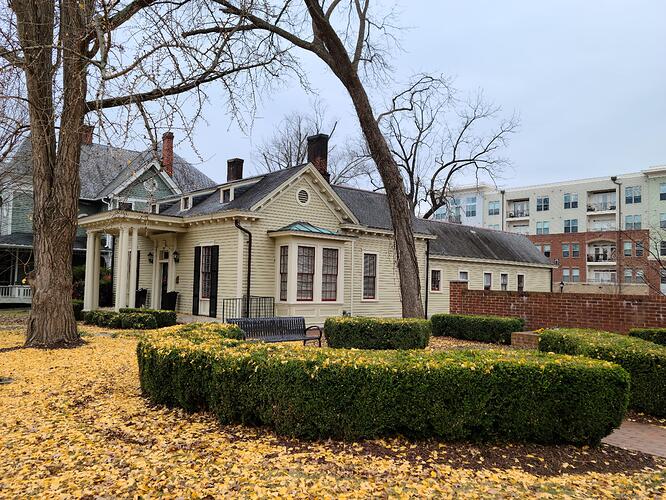 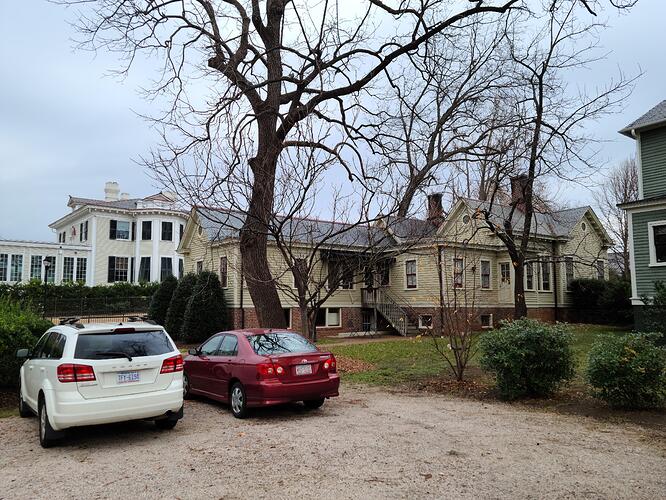 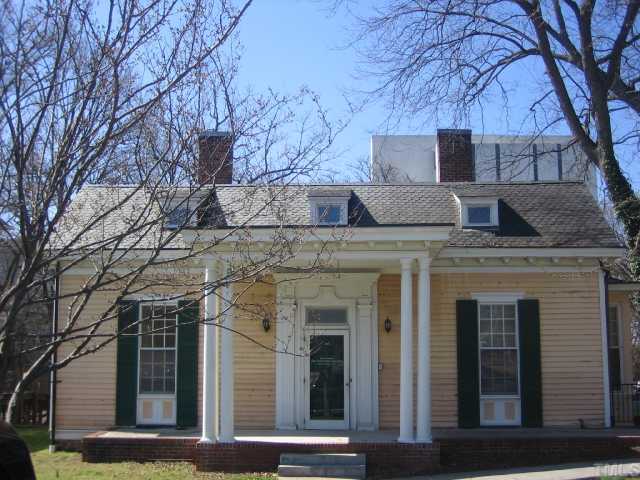