While the city has its downtown districts, its property taxes overlay district and its official downtown element boundary, what are your boundaries? What do you consider to be downtown, and where should downtown expand in the future?..or should it?
Should downtown include or exclude single family neighborhoods?
I have my thoughts but I’d love to hear all of yours first!

Just how I see it in my head.

Using those boundaries; Moore Square, City Market and the Gov mansion would all be outside of Downtown.??

3/4 of those are good. I think it should be Tarboro on the east. At the very least, East st should probably be the eastern boundary.

I was thinking it should be North (maybe North Boundary), East, South and West Streets.

I confused Blount and Person then.

The downtown element map was created in 2009 and is actually more expansive than the suggestions collected thus far. 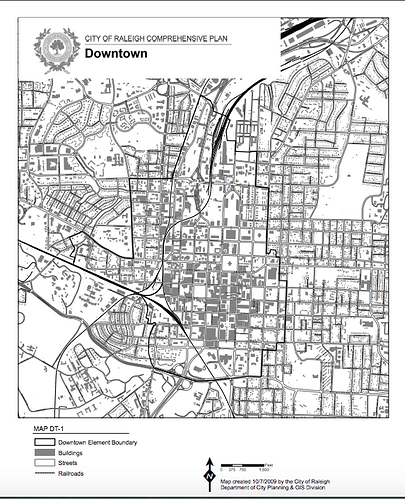 Screen Shot 2018-06-13 at 12.00.49 PM.png573×706 308 KB
It seems as though the city intentionally carved out single family neighborhoods from the official boundary, except for the remnants of the legacy single family neighborhood between Glenwood and St. Mary’s that’s primarily occupied by businesses.
I would be in favor of inclusion of Boylan Heights, South Park, Oakwood, Glenwood-Brooklyn, and Mordecai into the official boundary. I am also in favor of extending the boundary southward toward I40 if it’s coupled with long range infrastructure and zoning changes to urbanize its footprint.
2 Likes
dtraleigh June 13, 2018, 4:53pm #9

I think my definition is strange, almost hard to define and it depends on how you ask me. Here’s my take.

I think we have downtown Raleigh and her neighborhoods. Or in other words, there’s the urban part and then the downtown neighborhoods that are urban in nature. I’m not sure there’s this magical barrier where you are in or out. I see three pieces:

I think the neighborhoods participate, whether they know it or not, in policy and activities that happen in the core so including them in some definition of downtown Raleigh should exist. That doesn’t necessarily mean that the policies in the core should also apply to the downtown neighborhoods.

My borders then would be much larger than folks have said. Clockwise mine would be:

Glad to see this discussion because it is hard to define, especially when you see real estate listings that say things like “just minutes from downtown”… which could be mean 25 minutes by car, or a 15 minute walk.

Just curious, does your definition put Dix Park just outside of downtown?

I can’t decide about Dix to be honest. It’s so BIG in the context of this discussion. The DRA likes to include it as part of their green space numbers but I think that’s more to pad their numbers.

At the same time though there will be walkable entrances to Dix from downtown neighbirhoods.

When it comes to blog topics I choose not to cover Dix.

I don’t consider Dix downtown either. I’d be more likely to consider Pullen Park as downtown, but I don’t really consider that to be downtown either. Both are a stretch too far and Western, as a higher speed corridor seals the deal for me (for now).
If the city made significant zoning and infrastructure changes to the areas just south of DT proper, I’d likely reconsider.

I generally think of the neighborhoods beyond the Downtown boundary as being Greater Downtown Raleigh. I think these areas have the potential become distinct urban retail/business districts separate from downtown. These include the area between Martin Luther King, Jr. and Interstate 40, area surrounding the intersection of S. Tarboro and New Bern Avenue, and the area surrounding the intersection of Capital, Atlantic, and Wake Forest.

Downtown Raleigh should include: all of Cargill, all surrounding neighborhoods, Person Street area, I actually refer Cameron Village and park of Hillsborough Street as part of downtown, Dix Park is downtown, Pullen Park is downtown, up New Bern Ave is downtown.
Expand the downtown boundaries, it’s NOT just the CORE at all.

It’s harder for me to visualize the boundaries when only street names are given, no matter how well I know the streets of downtown. Thus, I created a map of what I consider to be downtown proper:

I have to learn how to do those sorts of maps. Yours isn’t that dissimilar to one that I created on PPT.

I think this is a good boundary, mainly because it doesn’t just give a narrow definition to “downtown” just based off of the architecture and commercial uses of the buildings in the area -but it also takes into account the culture of the downtown region at large.

The way I’d put it, if the area is near the “downtown” area and wouldn’t culturally belong in its own region (like NC State, Cameron Village, East Raleigh etc.), then it might as well be downtown.

Assuming Raleigh keeps growing (or at least, everything we know of gets developed, and the city doesn’t start shrinking), this makes me wonder about another, perhaps more important question though… Could the boundary/definition of downtown Raleigh change in the next few years or decades? Or will it be the same?

Thanks Jack!
If I didn’t live here and know better, I would say from this map that downtown goes as far east as Raleigh blvd?

This statistic out from TBJ… average retail rents in downtown Raleigh climbed $13/sf from end of '16 to end of '17. If this trend continues, downtown retail is going to lean very high-end stores and could become somewhat sterile. You’ll see fewer and fewer startups and unique local spaces. I think you’ll start to see new pockets further out from downtown formed for these rougher and more unique ideas. Like along Maywood Ave, Hoke St, Longview, Gateway Plaza. Mission Valley, etc… 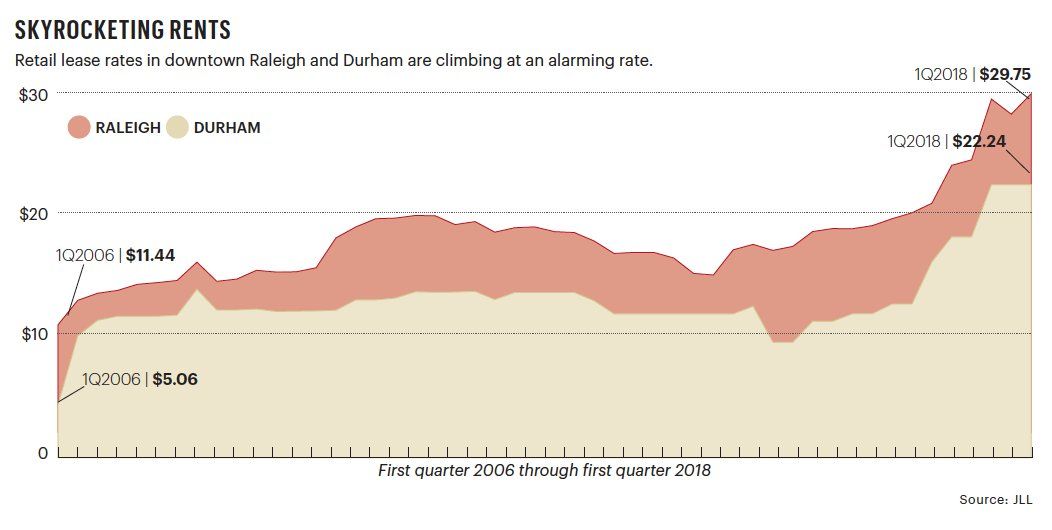 Sucks and there is a lot of empty storefront. The main space at the L building has never had a tenant for example. Still there’s businesses always opening up just this week that new flower shop by Deco and now there’s a new wineshop by the GoRaleigh bus station I think is called Short Walk Wines.