“NCDOT is inviting regional, state, and federal partners to learn more about potential commuter rail opportunities using the existing S-Line. A special train ride using the NCDOT-sponsored Piedmont service is scheduled for this Thursday, January 16, from 9:30 am to 2:00 pm. The Piedmont offers much of the same experience as commuter rail and a glimpse of what the S-Line could provide. Participants will travel from Raleigh to Cary where they will have lunch and hear from national commuter rail experts before returning to Raleigh. Please contact Kelly Blazey, Transit Administrator, for more information.” 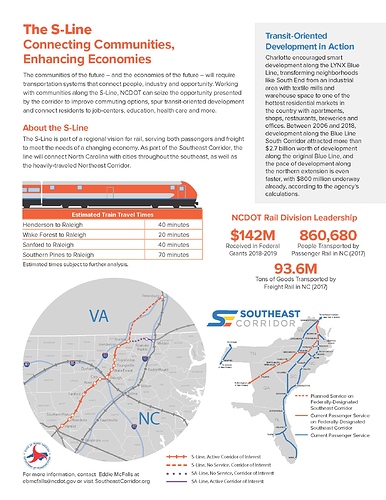 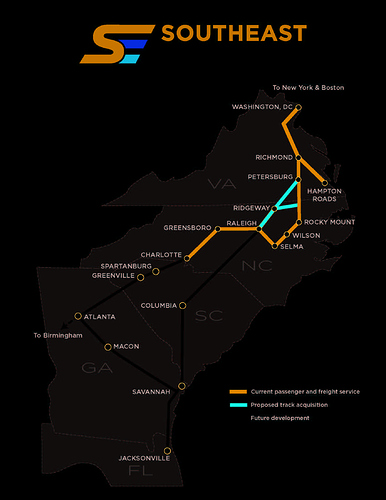 8 posts were merged into an existing topic: Commuter Rail - Garner to West Durham

Where/how did you find that “The S-Line, Connecting Communities, Enhanching Economies” handout?

I want to say it was on the NCDOT’s new http://www.southeastcorridor.org website. But, now I can’t find it.

Let’s do SEHSR, and mainly connecting north to Virginia, in this thread while keeping Commuter Rail here.

Since the ‘Light Rail’ topic in the Pub is for open-ended discussion about future transit ideas, I’d like to see a thread that’s more grounded for discussing the nuts and bolts of the commuter rail proposal from East Garner to West Durham. Planned to start operations in 2027, what has been discussed so far is a commuter rail system with a bidirectional 8-2-8-2 schedule, meaning: 8 trains in each direction during the morning peak 2 trains in each direction during the midday period 8 trains in …

So, I try to press Cary’s ‘Transit Administrator’ about the little Commuter Rail Preview regarding the S-Line held on 01/16. I was told that it had been ‘invite only.’ Well!!!

…in the benign “oh sorry! But that’s an unspoken rule” way? or the hostile, insular, “get the hell outta here, you’re going to make us lose a third mass transit project” kinda way?

It’s the second such meeting that they’ve had. The first was in Wake Forest back in September. But, it’s still a pipe dream without any proper funding. Probably why there wasn’t a big send-up. Maybe they’re getting their stakeholders lined up first.

The NCDOT has got a boatload of road projects to catch up on now that they’ve gotten their Federal money back for the unplanned work that was done after the last three major hurricanes. We’ll just have to keep riding our buses until then, instead of waiting on an unfinished train platform.

The Atlanta mmpt by FXFowle, now fxcollaborative who just won the bid to do the final Penn Station redesign.

Oh. I thought they already had their kickoff meeting for this… (there’s so many of these studies -there’s the Greater Triangle Commuter Rail study and the Fayetteville extension, and it occasionally sounds like the Durham-Garner rail study’s sometimes talked about as its own, separate thing?- it’s hard to keep track of where they all are in the CIG process…)

As for buses and things, yeah, I’ve already been planning on that anyways lol. The soon-to-be-improved services for GoRaleigh/GoTriangle are still welcome upgrades. With this, Chapel Hill’s upcoming schedule revamp, and that hurricane justice finally coming through, it could honestly be so much worse than this.

Especially if you keep in mind how SEHSR (and both states’ General Assemblies) is marching into political minefields; we gotta be careful to not get too hyped up about all the chatter about Raleigh-Richmond rail upgrades.

Funny they are still showing the now gone Ga Dome in the video.
Atlanta’s RR station is an a horrible place, and pretty much worthless for connections unless you are getting a taxi or uber. They definitely need to up there game there.

One more baby step in the right direction!

The effort to establish high-speed passenger rail service between Raleigh and Richmond, Virginia, got a boost Friday with a $47.5 million federal grant to the N.C. Department of Transportation.

This is great news. It will be a ton of work to up grade it to a high speed line, I recall riding this line to DC way back in the day, and as one would expect, it runs right through a lot of small towns along the way. But still, baby steps are better then no steps.
The article, I must say, reflects the cut backs in newspapers. The “so called x- line” is said twice. 20 years ago there was a copy editor who would’ve changed the phrasing in both cases.

There’s a lot of progress being made around DC to get rid of bottlenecks and build high(er) speed rail-ready tracks, so I’m glad to we’re not missing out on the action!

The real question, though, is whether state ownership means passenger rail will have priority over freight rail. If you look at Sen. Richard Burr’s comments in the press release for this grant awarding, it’s clear that the S-line won’t be passenger-only (which is the most ideal for high-speed rail).

The environmental studies (which took like 6 years) are thankfully already done. But I don’t think any engineering work has been done yet, and NCDOT still needs to purchase a few more pieces of land so trains don’t have to slow down at every other corner. If you ask me, I think this is where the real fight begins to make SEHSR a real thing.

What route will this use? The line heading north through WF looks like it ends in Norlina. Then nothing until Petersburg.

The future SEC will use the S-line all the way through the Raleigh-Richmond section. You won’t find any train tracks on Google Maps, though, because CSX got rid of the actual rails in the 80s. Because of this, they still own the right-of-way (property) between Norlina and Petersburg.

From the Environmental Impact Statement: 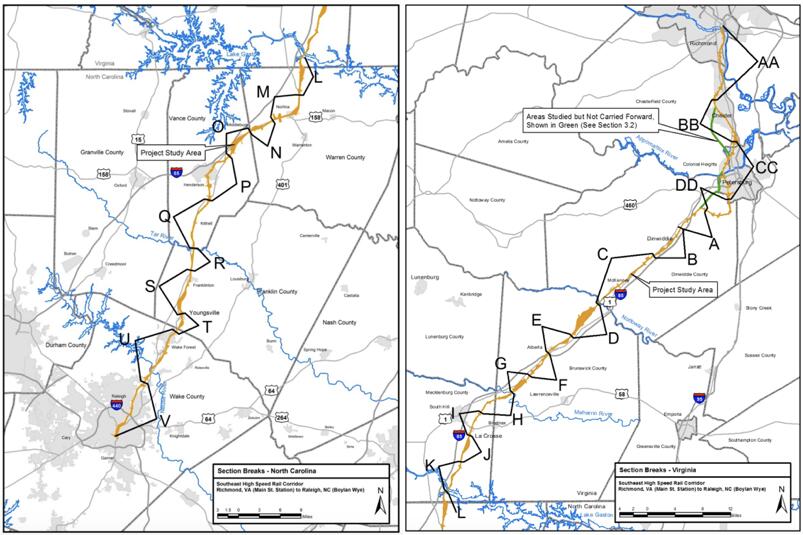 By the way, the Virginia half of this RoW will be sold to the State of Virginia by the end of this year. So, once NCDoT finalizes their own deal with CSX, the entire DC-Charlotte corridor will be owned by state governments.

From Virginia’s Dept. of Rail and Public Transportation: 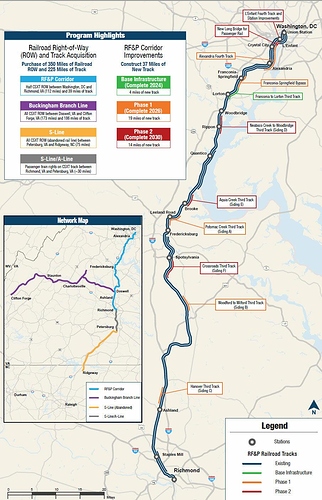 Brightline, the company behind the Miami-Orlando high speed rail project, finally announced their SoCal-to-Vegas line’s construction plans as well as their target to start operating by 2024!

Naturally, I got jealous of them and how they got there. If you ignore the time the developers got sidetracked with irrelevant drama like finding the wrong investors or fighting Tea Party congressmen, Brightline got their federal permission to build this rail line “three” years ago (2011 + 2018~20). So how did they make that jump so quickly when our connection to DC and Richmond is taking so long to fund?

Brightline is paying for this project by selling private activity bonds, but I got curious about how it worked and where that money would really be coming from. It turns out Morgan Stanley is the main underwriter of these bonds, but California’s part of the project is really being sold by something China has but North Carolina (or the US, federally) doesn’t.

That “something” is an infrastructure and development bank. It’s a bank specifically for public projects both big and small -plus, for Cali, lending money for small businesses specifically to help local economies. It makes it easier and quicker to have one place handling all public loans and bonds, instead of making each cabinet department do its own thing like in NC now.

Does anyone know if we’ve ever tried to do something like that around here -and if it might help make high speed rail through Raleigh happen sooner?

…just kidding. Not enough people bought the private activity bonds, so this project is back to being on ice indefinitely.

Dang, I’ve been pulling hard for that one. Looks really promising.

All eyes are on Texas now.